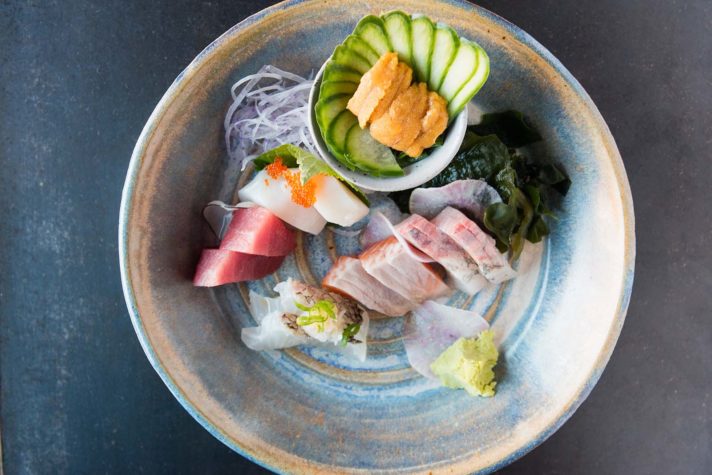 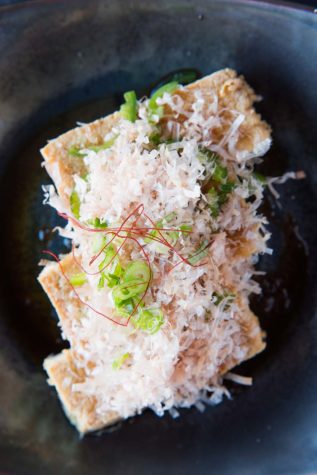 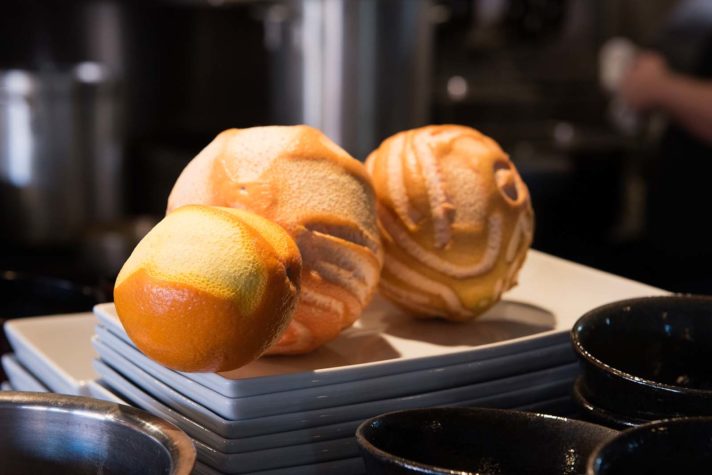 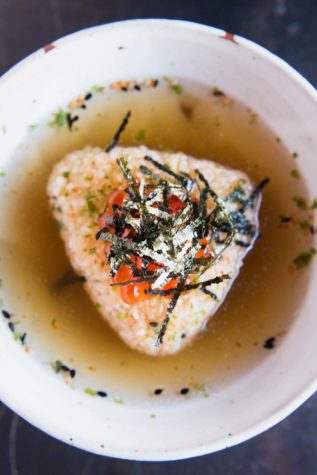 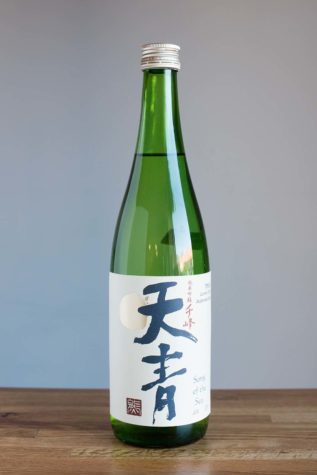 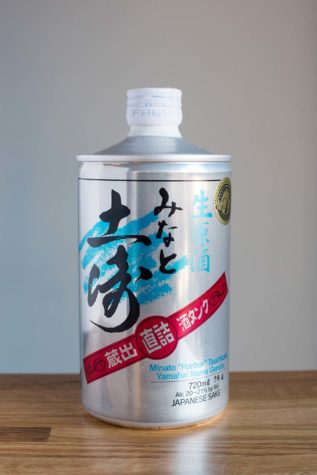 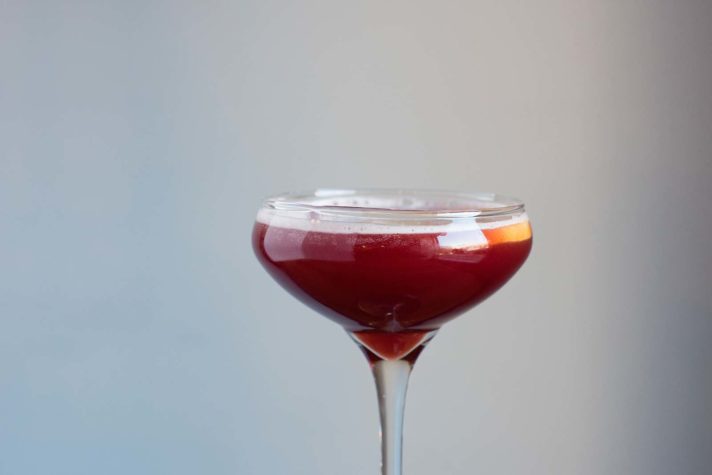 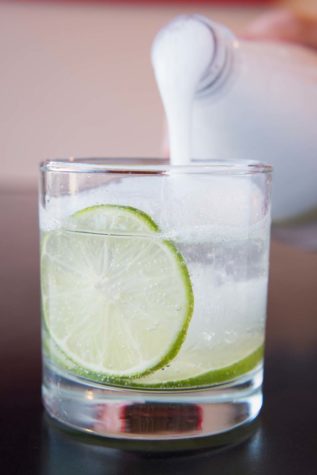 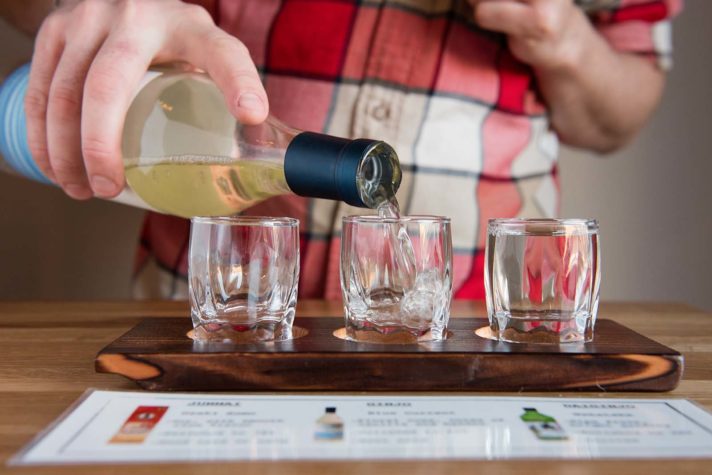 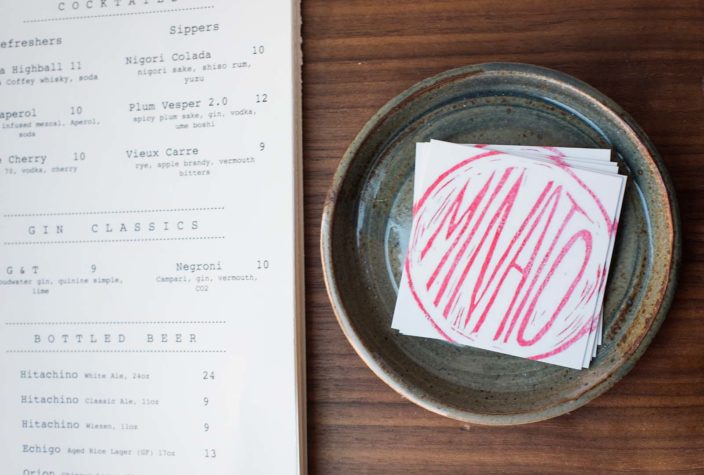 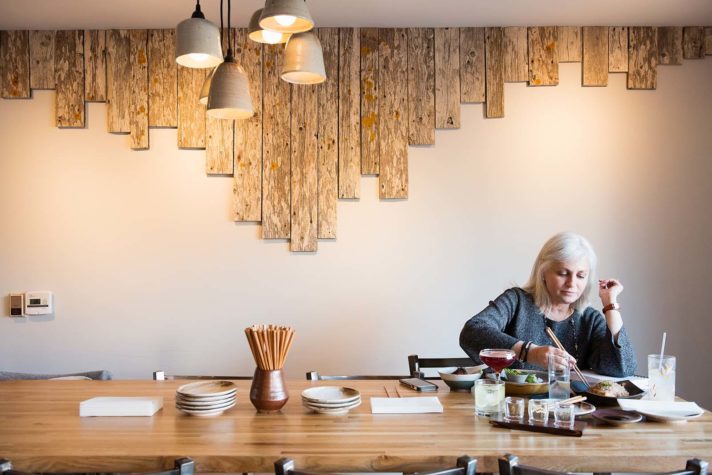 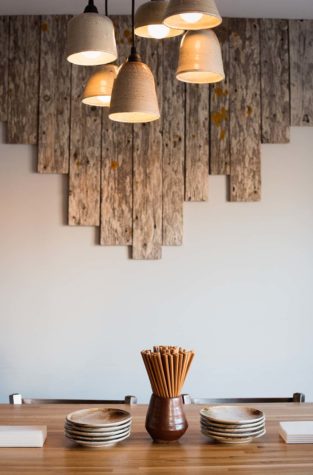 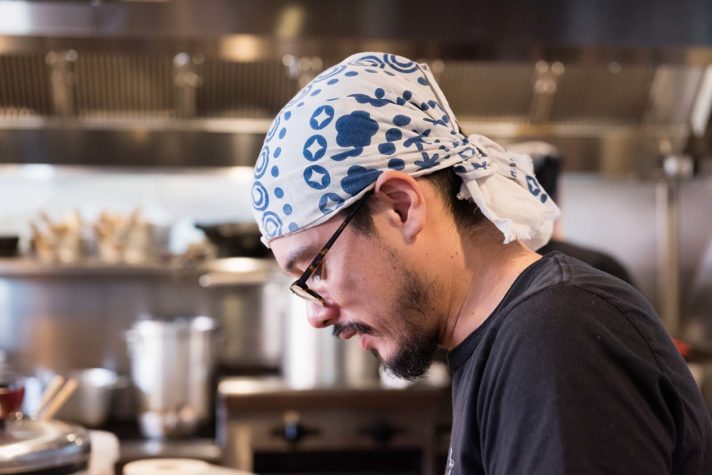 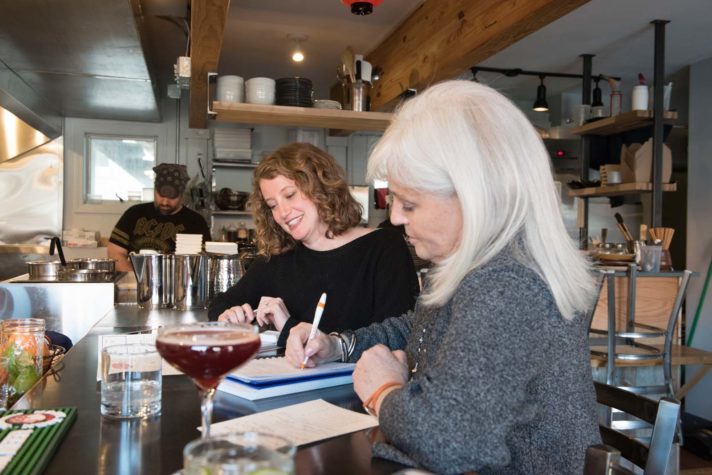 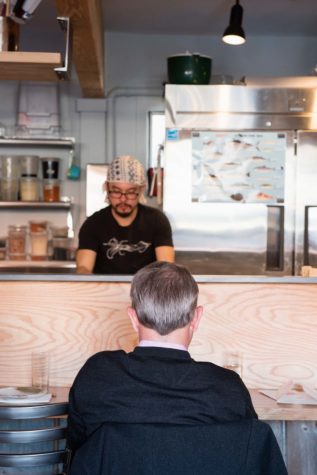 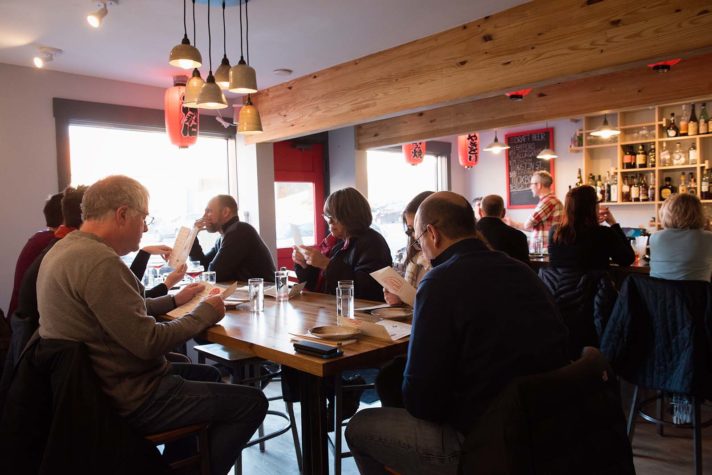 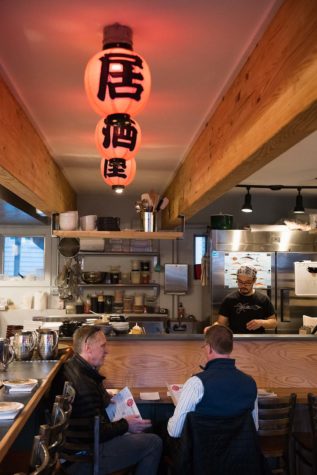 Washington Avenue in Portland’s East End has seen a dining and beverage boom over the past couple of years. There’s barbecue, a wine bar, juicery, gin distillery, brewery, plus the old guard, Silly’s and Tu Casa. Two months ago Izakaya Minato entered the delicious fray, offering Japanese specialties one might find at a Tokyo gastropub. “Izakaya is a word that describes the type of restaurant, like bistro or trattoria,” says Elaine Alden, who owns the place with her husband and chef, Thomas Takashi Cooke. The pair met in San Francisco while working at a Japanese restaurant called Tsunami. Upon leaving there, they spent three months in Japan, living with Cooke’s mother in Tokyo. Alden enrolled in a Japanese language course while Cooke worked at an izakaya, with an eye towards opening their own place. Alden wanted to stay in Tokyo and Cooke wanted to be in San Francisco, but in the end it was Maine that won out. Alden had spent childhood summers on Vinalhaven and thought she’d like to live in Maine. “Friends in Portland helped us make the decision,” Alden says. “And there was nothing here like the izakaya style we had planned.”

They found the perfect spot on Washington Avenue in a building owned by Pliny Reynolds of Terlingua next door. “It was the perfect size,” says Alden. ”Izakayas are really tiny.” The front room of Izakaya Minato is compact, with a bar area, a high communal table, and an open kitchen where you can watch Cooke and the others prepare food. It’s decorated sparingly, with a few hanging Japanese lanterns and driftwood that Alden foraged from Vinalhaven. Suspended above the bar and table are simple ceramic light fixtures made by Cooke. “While we were getting the place ready, Thomas started making pottery down the street at Portland Pottery,” Alden says. She shows me the platters and bowls, also made by Cooke and beautifully glazed. He also made sake cups to add the couple’s extensive collection from Japan. Order sake, and you can choose your own cup for sipping. “All food and drink is made to be shared, and having you choose the cup makes sake more approachable,” Alden says.

Alden has plenty of experience with sake and trained the staff to assist diners with the choices. A three-sake sampler might be the way to go for the uninitiated, enabling a side-by-side comparison. A variety of sakes are available, from the basic junmai to the premium daiginjo and even the Maine-made Blue Current ginjo. “I’ve been pleasantly surprised by how many people are ordering it,” she says, “even the warm ones.” Behind the bar, Isaac MacDougal creates and mixes cocktails, including some with using the fermented rice wine. He presents us with a Nigori Colada, a refreshing sipper made from nigori sake, shiso-infused rum, and yuzu. The Plum Vesper 2.0 features spicy plum sake with gin, vodka, and a garnish of salty umeboshi, a pickled plum. The bartender uses seasonal fruits for infusions, including kumquats, cranberries, and most recently, cherries. He also makes his own quinine simple syrup for Stroudwater Distillery gin and tonics, carbonated to order. The cocktail is a surprisingly excellent complement to Cooke’s food.

The chef creates his own interpretations of classic izakaya-styke food, using fresh Maine ingredients. Fish comes from nearby Harbor Fish Market or Upstream Trucking, as well as a Japanese seafood company that makes a delivery every Thursday. A gorgeous dish of sparkling fresh sashimi includes local uni, two types of tuna, snapper, and last-of-the-season Maine scallop. Local crab is employed in a savory omelet, and Cooke is excited about the upcoming mackerel season. There are dishes for those who aren’t seafood lovers as well, including the wildly popular JFC, or Japanese fried chicken. I’m assured this is a classic Japanese dish, with the meat marinated in a mixture of sake, mirin, soy, and more, and then fried in potato starch crust until ultra-crispy. Tofu gets a similar treatment, topped with jalapenos and soy sauce. We love the kinoko salad full of sautéed specialty mushrooms and roasted carrots. The menu is arranged with the lightest dishes on the left, proteins in the middle, and starches at the end. “The idea is that you’ve been eating and drinking your starches in beer or sake,” says Alden, “but if you’re still hungry, order a shime, a dish of noodles or rice to finish.” The very best way to get a taste of izakaya food is by ordering the omakase, or chef’s choice, for the table. “It’s great if you’re unfamiliar with this kind of food,” Alden says, “or for big parties, so you don’t have to think about ordering. It’s very common in Japan.” Cooke might even include some special, off-the-menu items, such as tuna poke.

Alden tells me Izakaya Minato has been busier than they anticipated. I’ve heard stories about occasional lines out the door and countless rave reviews—from a cardiologist friend who adores Asian food to a Maine Media Collective photographer who claims it’s his new favorite restaurant. 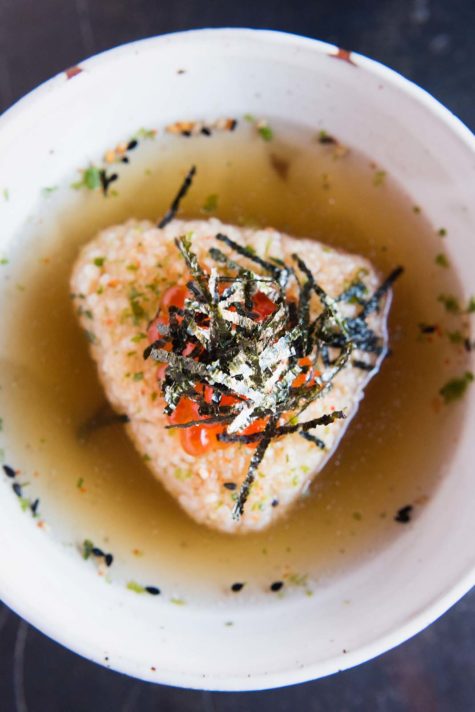 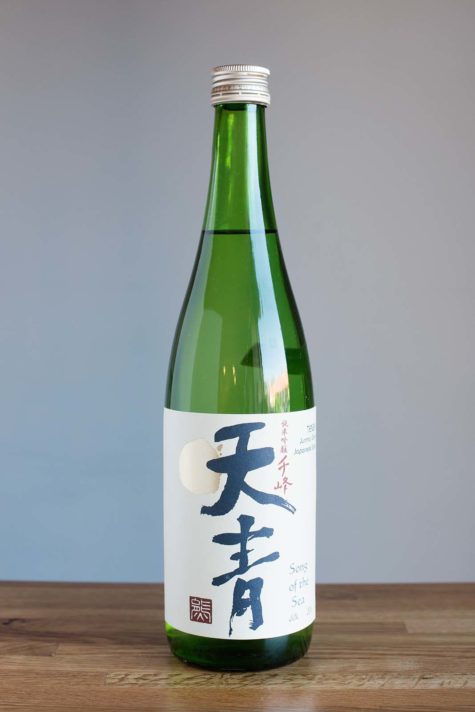