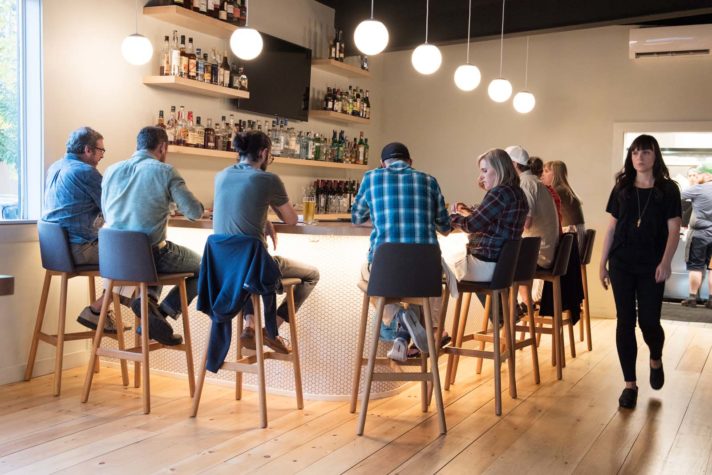 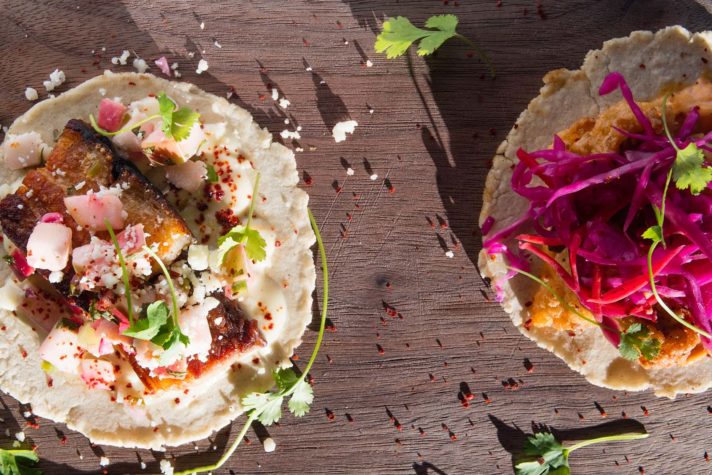 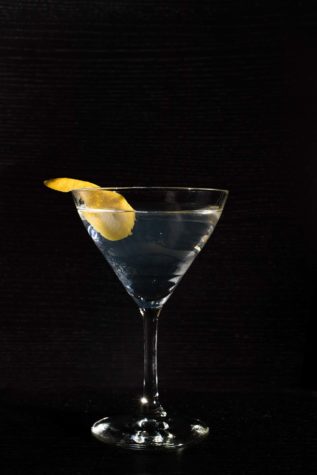 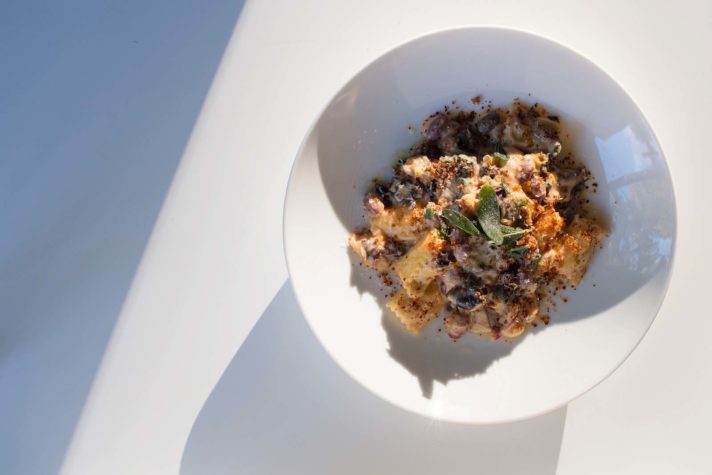 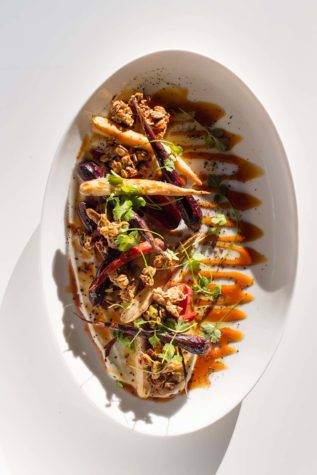 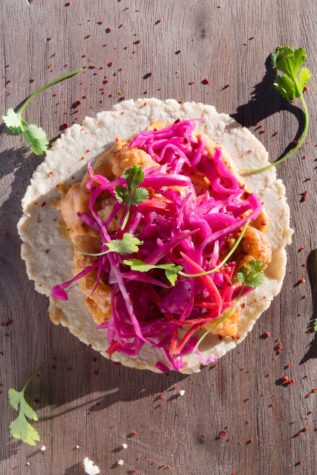 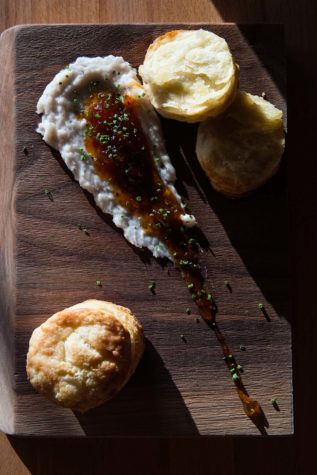 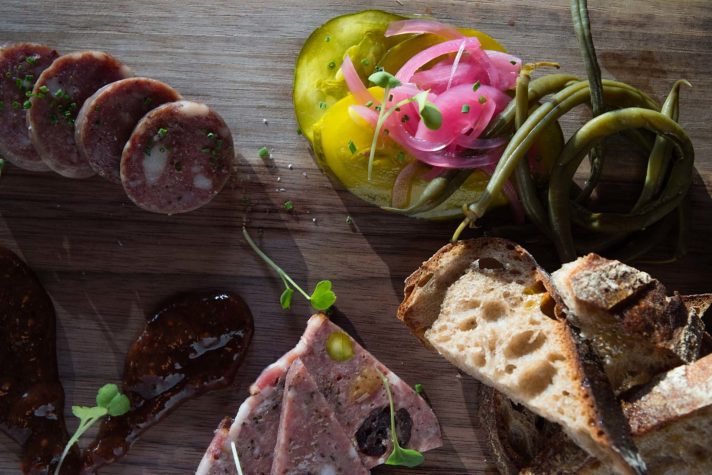 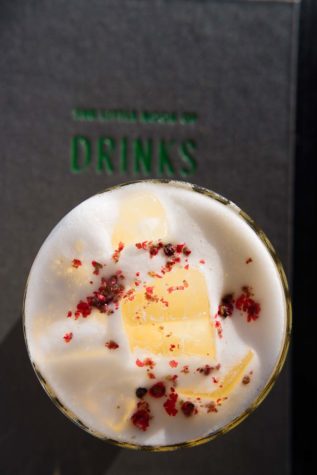 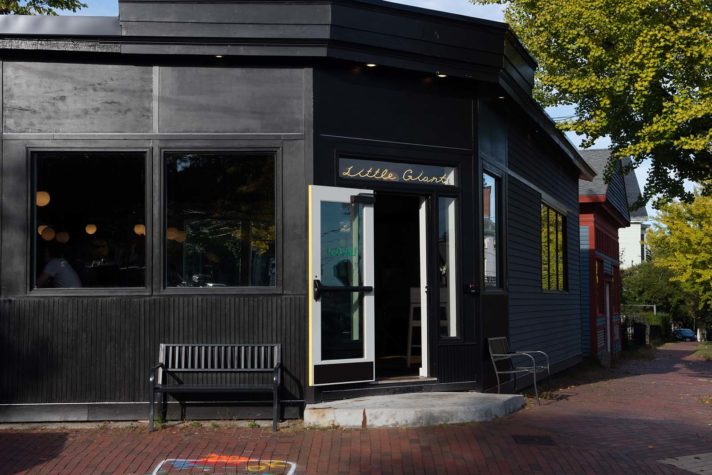 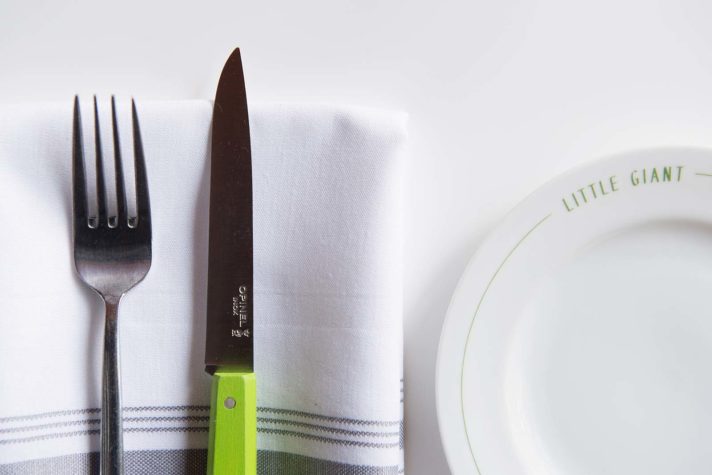 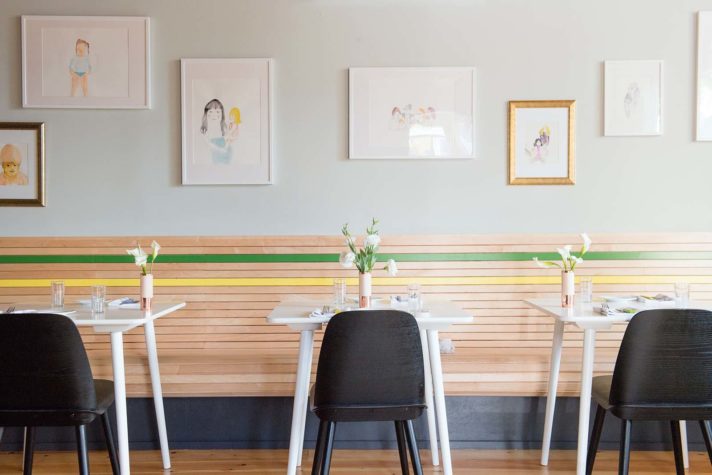 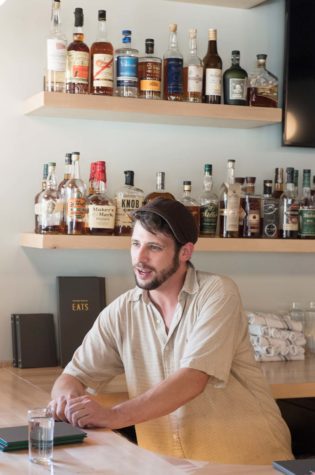 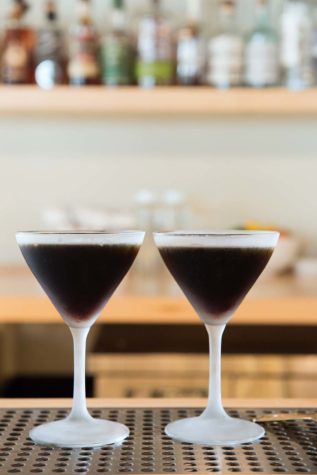 Sitting with Briana Volk at a booth in Little Giant, I am distracted. She’s holding Rocky, her handsome and happy five-month old baby. It’s hard not to look at him, trying to make him laugh, but Little Giant commands attention as well. The place is bright and open, thoughtfully designed with a chic Scandinavian-meets-Californian vibe. The front room holds the bar, with its blond wood top and white tile trim, as well as a few booths. A long mirrored wall separates it from the back dining area, which is spare but stylish, decorated with painted family portraits. Volk did most of the design work herself. “We wanted it to feel bright and welcoming no matter the time of year,” she says.

This is Volk’s second venture with her husband, Andrew, who is visiting Cognac, France, at the time of my visit. The couple also owns popular Old Port craft cocktail bar, Portland Hunt and Alpine Club. “We wanted to do something in a neighborhood, a spot you could come back to even as the trajectory of your life changes,” Volk says. “It’s good for date night, with the kids, or bring your grandma. The right space came up to allow us to execute that idea.” The Volks purchased the building (with partners Ian and Kate Malin), and first opened the Little Giant shop next door. They opened the neighborhood market last December with a well-curated selection of gourmet groceries, wine, sandwiches, and baked goods. “It’s what we thought the neighborhood needed,” Volk says. Little Giant, the bar and restaurant, opened its doors in July, and the West End was ready.

Chef Rian Wyllie and his wife moved to Maine last spring after he worked for ten years as executive chef and partner at Lone Star Taco Bar and Deep Ellum in Boston. Wyllie joined Little Giant after meeting the Volks through a mutual friend. “We gave him a broad idea of what we wanted, and he brought a menu to us,” says Volk. Wyllie says created a menu that he would want to do for himself. “It’s the food I like to eat,” he says. The style is broadly European, but the team doesn’t want to pigeonhole itself. There are, of course, tacos, one of Wyllie’s specialties. The corn tortillas are made in-house, and the fillings are constantly evolving. The cornmeal-fried oyster was perfect, light, and crisp, served with chipotle tartar sauce and pickle red cabbage. A pork belly taco with apple salsa and maple ghost pepper crema was a special taco of the day available at happy hour. Wyllie is a genius with charcuterie, offering a board of all house-made meats and sausages, including wild boar jagerwurst (German hunter sausage) and country pork pâté with dried cranberries and pistachios. Roasted plum mostarda and pickled vegetables are nice complements to the rich meats. The chef does well with vegetables, too, especially a unique dish of carrots, slow-roasted on a bed of Tandem coffee beans. The coffee imparts an earthiness to the sweet carrots, which are served with a savory pistachio-ginger granola and drizzled with chili honey. It’s a beautifully presented dish, the epitome of fall. We loved the agnolotti, too, stuffed with wild mushrooms and house-made ricotta, with a touch of orange zest and sage. The pasta is topped with browned butter bread crumbs, adding crunchiness to the smooth sauce. The menu also offers two “giants,” or family-style plates to share, such as a whole smoked chicken with cornbread and potato salad.

As would be expected, the bar program pulls equal weight with the food. Max Overstrom-Coleman is the man in charge, and he’s developed food-friendly cocktails, including some low alcohol ones for sipping with dinner. The Little Giant Martini draws on his experience as a marine scientist, using local filtered seawater. Knife Fight, an eminently drinkable combination of bourbon, lemon, pineapple, and ginger, is one of the most requested cocktails. The Espresso Martini, an Andrew Volk creation, makes a fine after dinner drink. Overstrom-Coleman also offers large format cocktails, “for three or more thirsty people.” It’s fun to share the Admiral Stiggins, a rum punch-daiquiri blend topped with a pineapple frond and served in a tall crystal decanter with a spigot. For cooler weather, try the Hot Buttered Rum, brought to the table in a stainless coffee carafe to be poured into Little Giant’s signature mugs. “We’re here to serve our neighborhood,” says Overstrom-Coleman.

Little Giant packs a lot into a small space. Brunch will soon be offered, and the Volks continue to innovate at the bar and in the kitchen. It’s the kind of place that has all the lyrics to “Born to Run” printed inside the bar menu, “just because.” The Volks have a reputation for creativity, style, and quality, and Little Giant checks all those boxes. 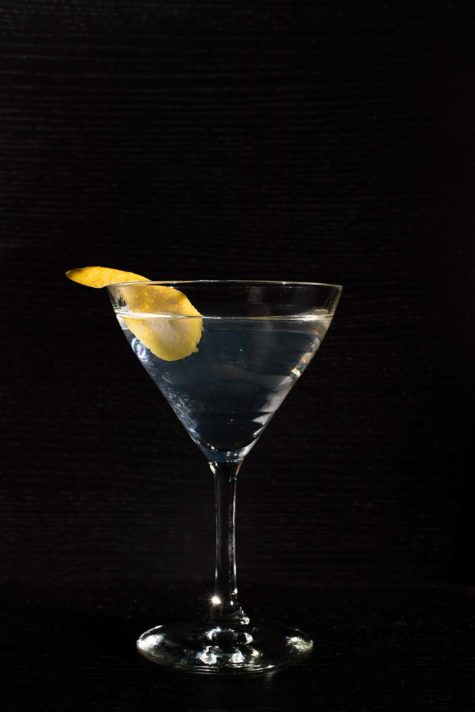 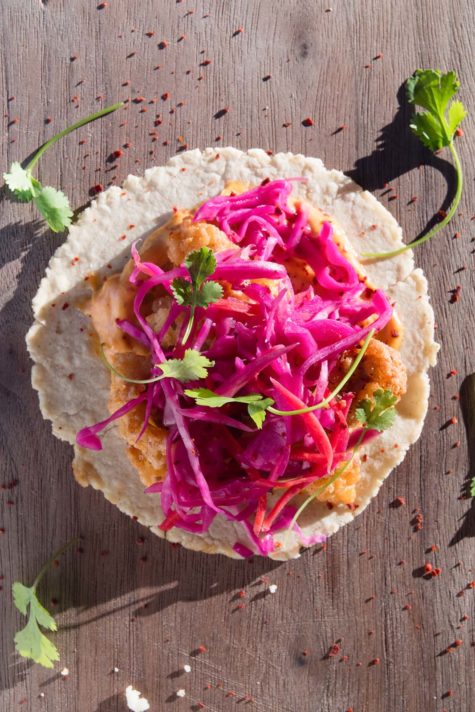