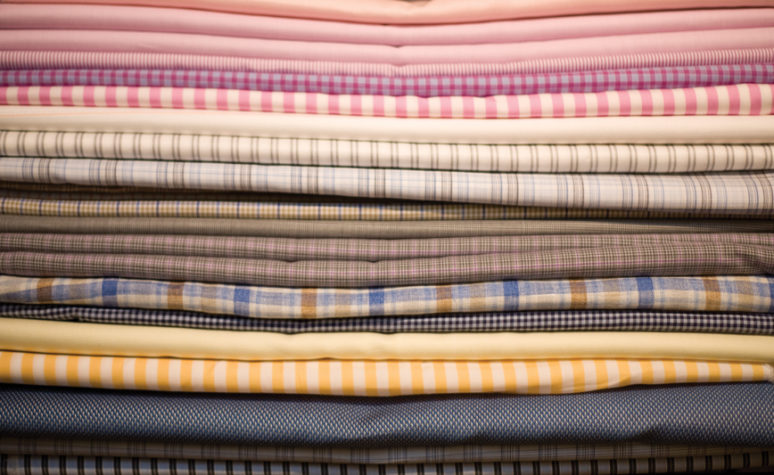 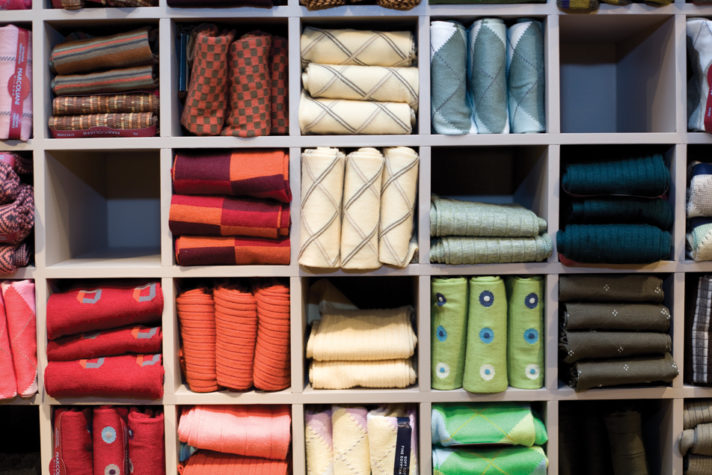 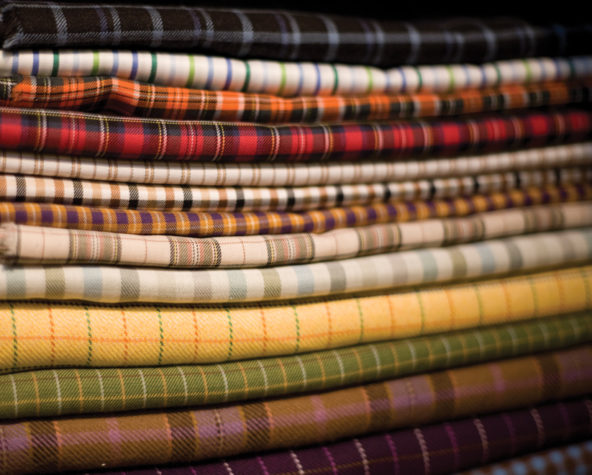 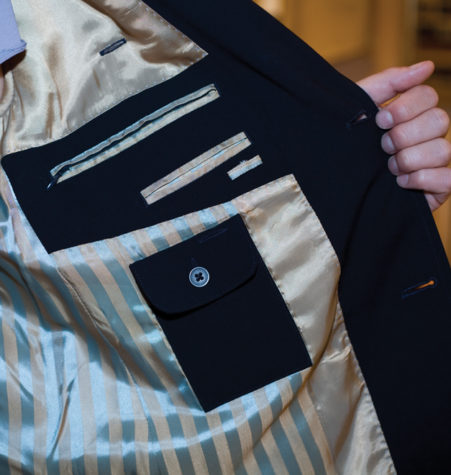 Custom-made suit jackets come with details suited for each client, including pockets for wallets, iPhones, or watches. 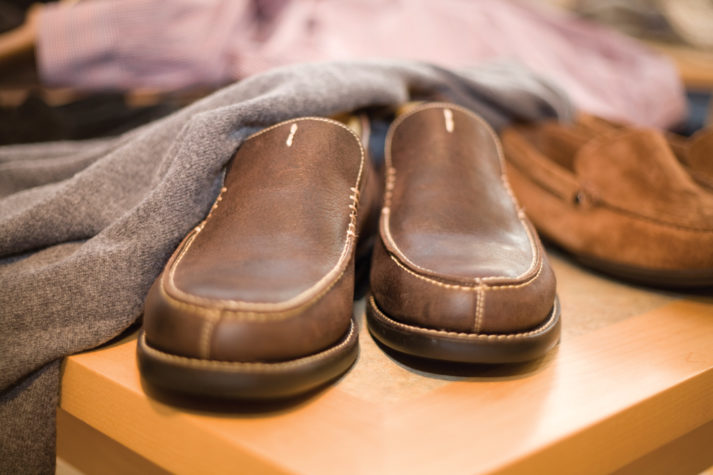 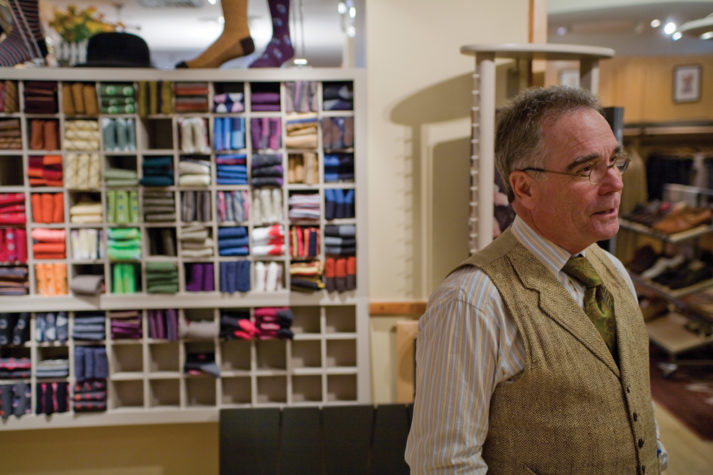 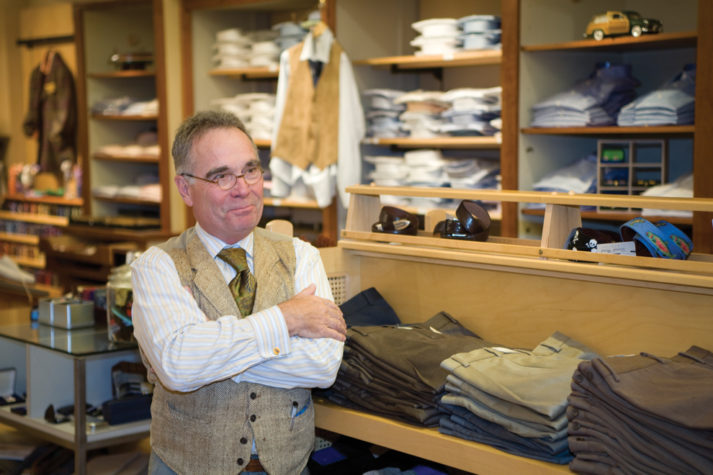 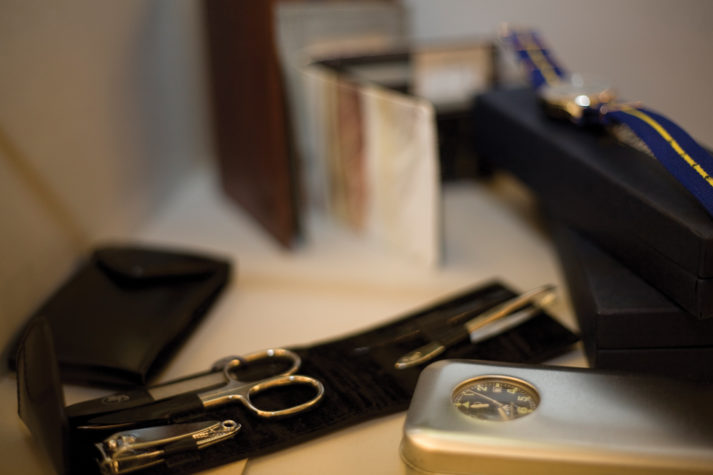 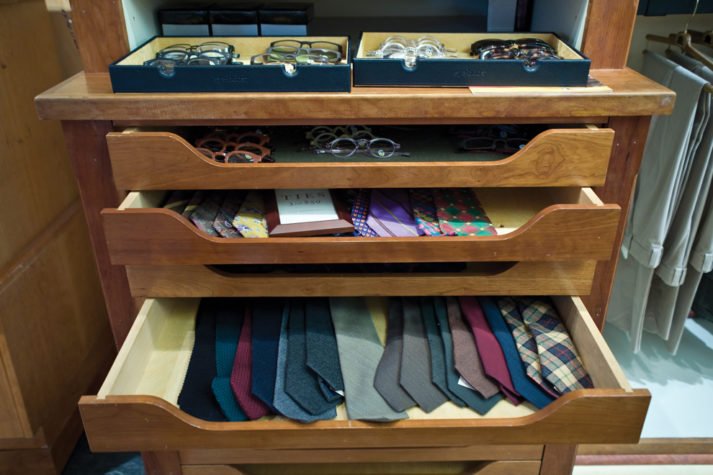 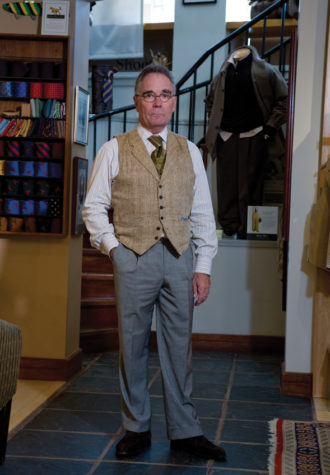 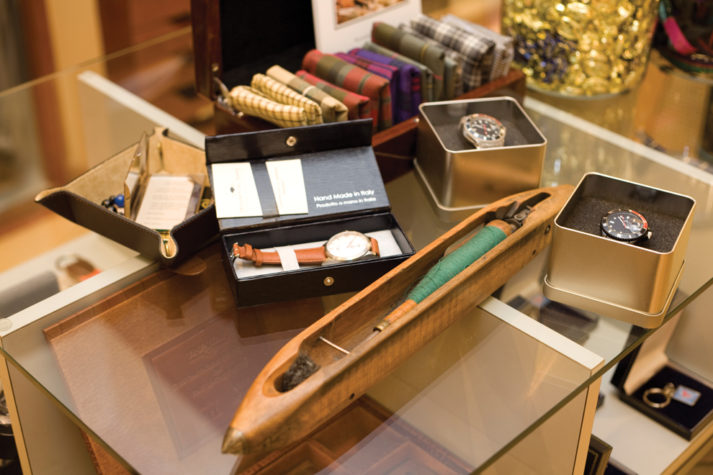 The glass case at the shop is topped with watches, leather pouches, a wooden shuttle, socks, and golden butter caramels. 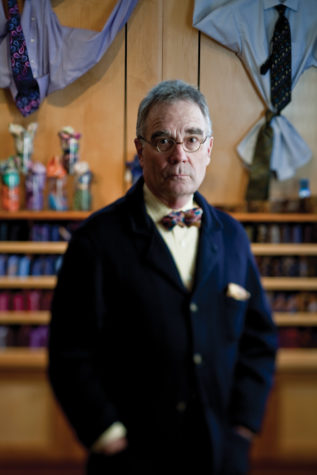 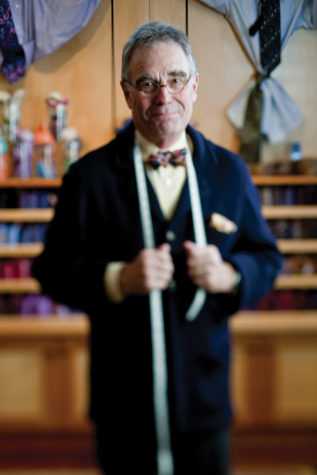 David Hodgkins thinks of socks as sweaters for feet. 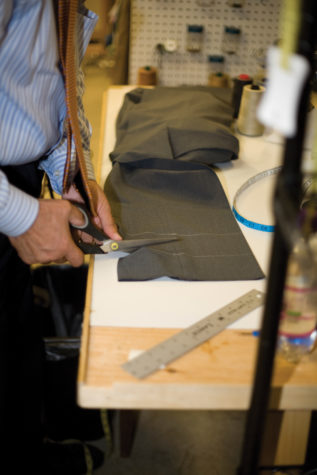 Their mission: to outfit men with style acumen and stylish accoutrements. To this end they stock the best of everything: Michael Drake’s handmade ties from England, leather goods by Martin Dingman from Arkansas, Shetland wool sweaters from Harley in Scotland, Alden tassel moccasins made in Massachusetts, shaving gear from Truefitt & Hill in London, all kinds of custom pants, suits, tuxedos, shirts, and sport coats. “Classic clothing for the dressier side of the wardrobe. That’s what we do,” says owner David Hodgkins.

A Visit with David Hodgkins The shop, a former dry goods wholesaler, is in the middle of the Old Port, in the middle of everything, but for the sake of privacy and casual exclusivity it is a half-floor belowstreet level—lit by south-facing windows but seemingly far away from the crowds. It smells like leather and wool. Wooden stairs wind down from the sunny foyer to the shop. Hodgkins is there waiting.

What a gentleman. He’s 65 years old, small and sturdy, studied microbiology at The University of Maine–Orono, and lives on Cousins Island in Yarmouth, where he and his wife raised four kids.

The man wears his clothes well: modern horn-rimmed glasses, herringbone vest, lobster-shaped cuff links, silk necktie, flat-front slacks, and suede shoes. His look, and the look of the store, is sleek but oldfashioned. Hodgkins is a twenty-first century man, but I can still picture him wearing a derby hat—logo of the store and icon of bygone style.

I tell Hodgkins that I’m headed to New York City for a few days. I’m either flying or taking the train, and so I don’t want to bring much. The time, late October. The weather, fickle. My plan, to be all over the place, on the subway, in the cab, at the party, at the afterparty, in the hotel lobby. I’ll need something proper and rugged but also versatile.

Hodgkins listens carefully. He looks me right in the eyes. He considers the challenge and then makes a move.

“Okay, let’s start with the trousers,” he says.

He pulls a pair of wool trousers from the shelf. They are cut straight and slim, detailed with leather trim around the pockets and cotton shirting along the inside waistband.

“These pants are made by Hertling Trousers in Brooklyn, New York,” says Hodgkins. “Mr. Hertling is 88 years old. He knows a thing or two about making trousers.”

“These will last a long time, but unlike some of the new synthetics you can’t launder these in the hotel room. And they will wrinkle a bit—they’re natural and wrinkles are just part of the texture.”

I try the pants on. I like the way they fit.

“This model is called the Gene,” says Hodgkins. “It has a flat front and a relatively short rise.”

“The rise is the distance between the low point on the crotch and the top of the waist band. The fit on the Gene is slim, but not too slim. Too slim and it’s Popsicle sticks stuck in an apple.”

Hodgkins agrees but says that for a while now there’s been a trend toward trimmer fits. “It’s getting back to the JFK look,” he says. “The classic forms of the late 1950s and early 1960s as opposed to the drape clothing with double and triple pleats and lots of fabric through the thighs that were popular in the 70s and 80s.”

Next is the shirt. Hodgkins measures my neck and arms and then picks out a checked button-down from Fall River Shirt Company in Massachusetts. Perfect.

Then, the sport coat. The clothier picks a navy blazer made by Southwick in Haverhill, Massachusetts. This is the one,” says Hodgkins.

“It has natural shoulders; it’s all wool, but good in different climates, in different seasons. The foundation of a classic wardrobe.”

Finally, the tie. Hodgkins chooses a black silk knit tie from a small workroom in Manhattan. “This one won’t wrinkle,” he says. “Wrinkles in a tie are definitely not cool.”

I worry that my outfit, the slacks, dress shirt, jacket, and tie might be too formal, too stuffy. I express my concern.

Hodgkins looks at my outfit for a few moments and then says, “You know, my father and his generation put some emphasis on dressing up to travel. When my dad traveled he always wore a sport coat and a tie. Always. You don’t see a lot of that anymore. Now people dress down to travel. But me, I’m sticking with the old ways.”

Hodgkins takes me to the back of the shop to have the pants hemmed by Mike Veziris, a master tailor from Greece.

On the way, we pass the Fitter, a sophisticated device coupled with software that turns measurements into an accurate pattern. Hodgkins puts customers on the machine to measure full shoulders, half shoulders, sleeves, backs, inseams—46 measurements in less than 15 minutes. He used to stock a full line of ready-made suits. Now, with the machineand tailors in Canada, Massachusetts, New Jersey, and Brooklyn, he can have custom-made, hand-tailored ones ready in 12 working days.

In the back room, taped to the wall is a photo of Hodgkins with his family. He’s sitting on a lawn wearing blue jeans and a Rogues Gallery T-shirt.

“Very funny,” says Hodgkins. “But I wouldn’t leave the house looking like that. I’m free to dress down when I’m in my own backyard.”