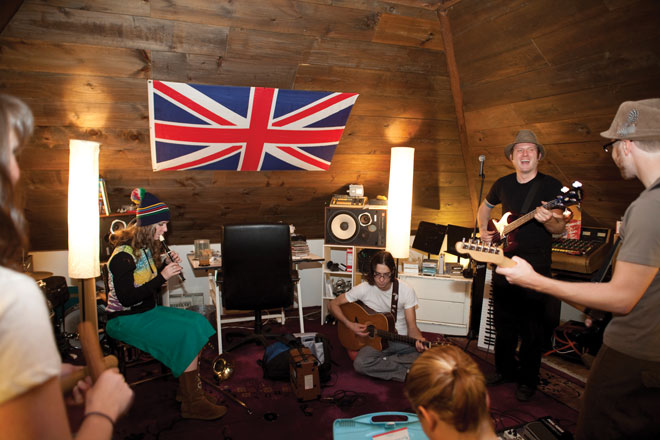 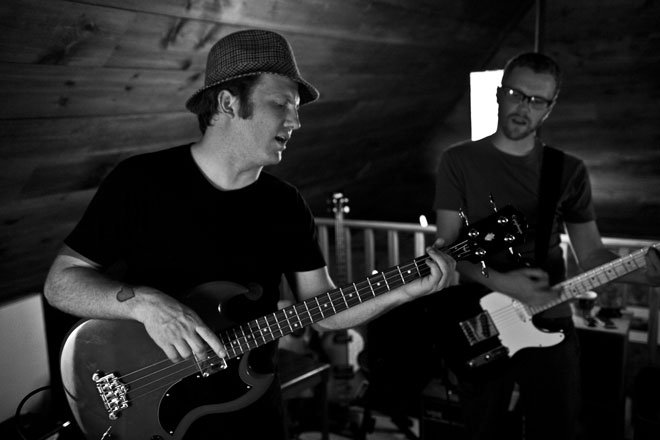 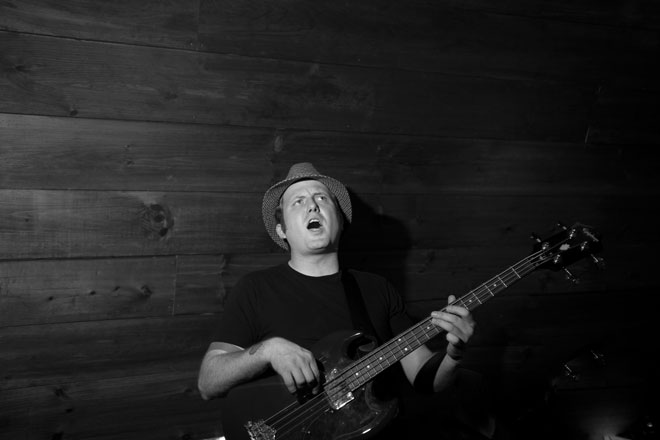 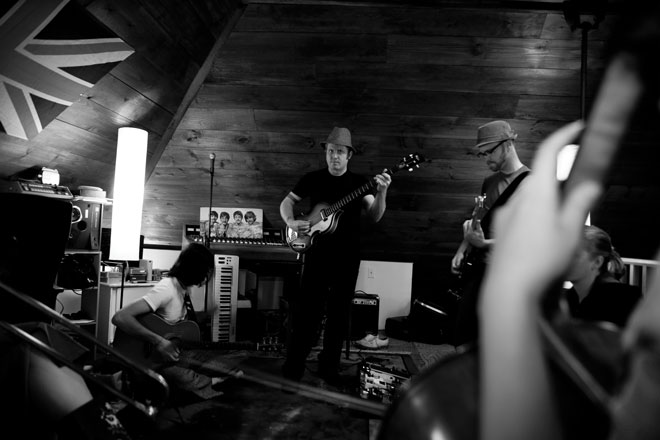 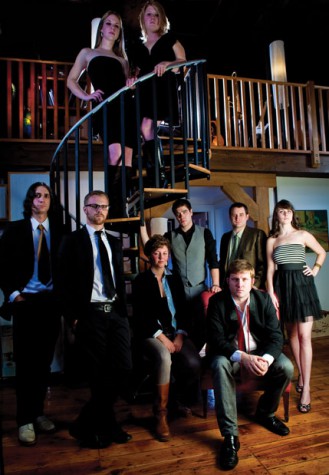 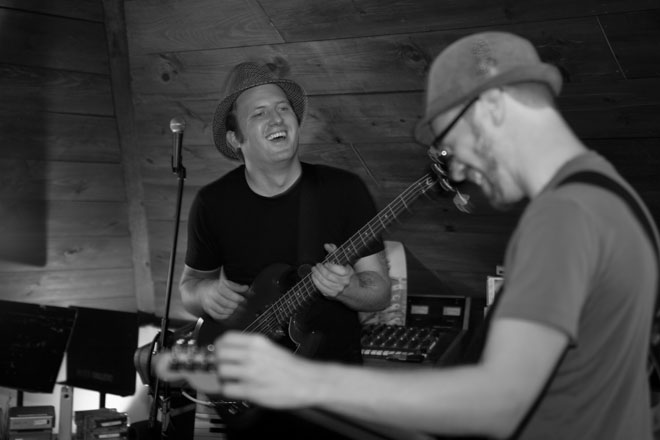 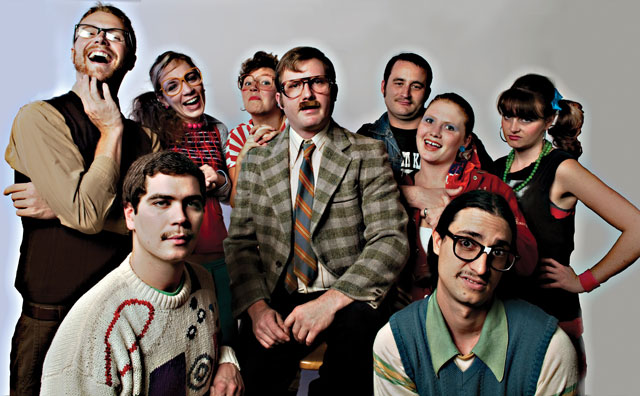 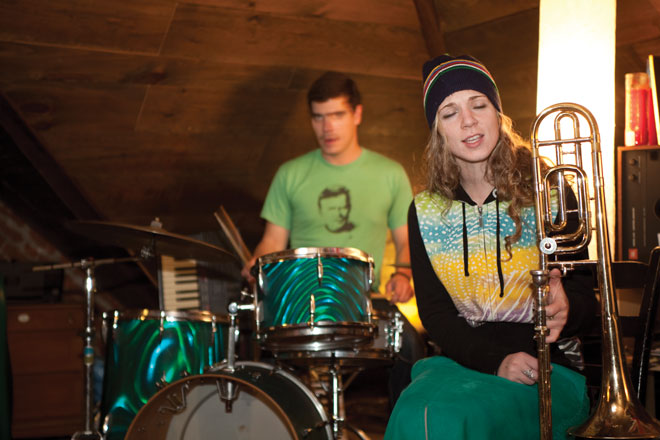 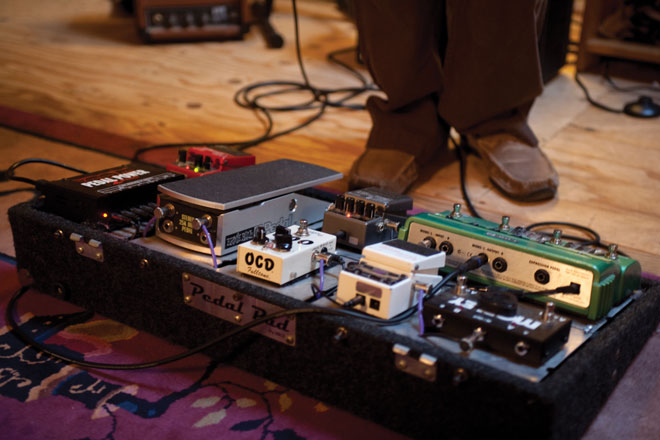 Spencer and the School Spirit Mafia

All killer and no filler. Spencer Albee’s beautiful pop music has propelled the fun, fledgling 11-member band into the spotlight.

Spencer and the School Spirit Mafia is a big band by any measure, 11 members strong. Sure, there’s a guitar, vocals, bass, and some drums. But the Mafia takes it ten steps farther—layering in cello, viola, two trombones, ukulele, saw, glockenspiel, viola, percussion galore, and even the occasional sitar.

When the band tumbles into the studio, they are like clowns in a clown car—packed into Albee’s West End apartment. They shout and trade high fives as they clamber up the tiny spiral staircase to Albee’s loft. When practice starts, they practically sit on each other’s laps—trombone slides whiz past the drummer’s ears, guitar headstocks swing dangerously close to the singers’ faces, while everyone else tries to keep Spencer’s dog from stepping on the guitar pedals and knocking over all the microphones. They play every instrument, like a dozen giddy school kids trying out for the school band.

“Spencer will be like, ‘I need this here. Who can sing this part? Can someone play this?’” says drummer, Charles Gagne.

“Someone else says, ‘Yeah, sure I’ll try that,’” says Spencer’s sister, Katherine Albee. “And Woosh! The instrument flies across the room.”

Fortunately, their talent equals their enthusiasm. They’re adept at playing any instrument. While that should make it difficult to extract each member’s influence from the whole, it is clear what is going on here—Albee is playing the role of a very talented puppeteer, working with equally talented puppets.

At one recording session with his strings, Albee just hummed what he wanted to hear. Kallie Ciechomski picked up her violin and Emily Thomas picked up her cello. The two parroted his humming back with virtuosic skill. After a couple takes, Albee leaned back in his chair and smiled, smacked the play button, and rested his hands behind his head. The song “Come Back Monday” jumps out of his stereo, now backed by what sounds like a small orchestra.

The Mafia was friends first and foremost. There was no real point where the band formed. Friends just helped Albee on whatever he happened to be playing. The idea for this band grew out of the collaborations. Many of the members had played in Albee’s previous projects, a pedigreed list of some of Portland’s most recognized bands. Albee played keyboards in Rustic Overtones. He fronted As Fast As.  In 2004, Spencer created one of Portland’s most popular and profitable music events, the Clash of the Titans, a battle between pop and rock acts from every decade at Portland’s Empire Dine and Dance. At a recent battle between The Pixies and Sonic Youth, “Black Francis” and “Kim Deal” roared as “Thurston Moore” and “Kim Gordon” tore apart the stage in sweaty, frantic acrobatics.These events are loud, no doubt about it, but they don’t make Spencer miss his rock-oriented past.“I feel closer to the essence of my music when I’m harmonizing and playing beautiful pop music. It’s what I’ve wanted all along.”

At home, Spencer works hard to perfect the band’s sound. He obsessively adds and removes instruments, harmonies, and rhythmic ideas until he feels he’s carved out the essence of a song. Albee pumps a few tracks from the Mafia’s only album, Candy, Cake & Ice Cream, out of his new thrift-store stereo, grumbling about the drums on this track, or tweaking the EQ on the guitars. His self-critique never ends.

Around him, his home studio is scattered with instruments, microphones, and hi-fi gadgetry, the raw energy of the band spilled onto the floor. He keeps close tabs on all the band members, stopping during our interview to answer his phone three or four times. Most of his bandmates play in other bands, work, tour, or study music at conservatories halfway across the country, requiring cross-continental or sometimes even trans-Atlantic coordination. Yet the result of all his logistics don’t seem forced. “When we get together, I get confused whether we’re having practice or a social function,” he says. “Let’s have a barbecue. Then let’s practice.”

Live at the Common Ground Fair’s amphitheater stage, The School Spirit Mafia crowds up to the microphones, blinking into the low afternoon sun. Short on string players, the trombones step in to cover, adding a spontaneous change to the sound. Spencer throws on sunglasses and counts down. The catchy refrain of “Big Old House,” kicks in, played on two cheap little recorders.

They almost sound like a different band, like a band covering their own album Candy, Cake & Ice Cream with a messier, more appealing approach. During their shows, one thing is obvious: they’re having fun. They sound like a rock band—raw, unfettered by studio sheen—walking the line between energy and recklessness. And for all Mafia’s forays into grittier territory, they stay faithful to the pop orchestrations that Albee envisions. The formula works today. The crowd dances and cheers thunderously, demanding an encore, which The School Spirit Mafia couldn’t have been happier to oblige.