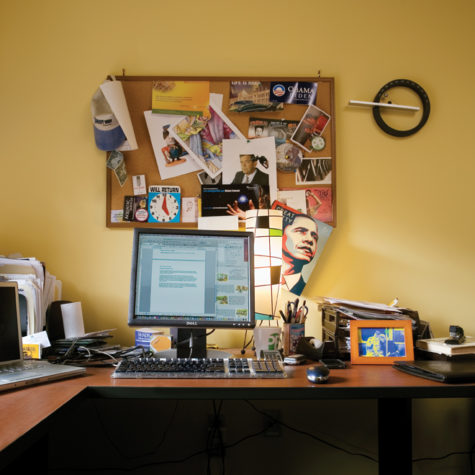 Michael Townsend is the Director of Creative Services for Perry & Banks, where he works on campaigns for the City of Gardiner and national business-to-business clients. In 1985, during a trip to Lubec, Townsend came up with an iconic Maine phrase that has subsequently been adapted for I-95 road signs, a Subway sandwich slogan, and L.L. Bean T-shirts: “Welcome to Maine, The Way Life Should Be.”

His office overlooks Post Office Park in downtown Portland, which is a mixed blessing. Great afternoon light, close to the action. “But there’s a guy out there that plays Kenny G all day long—and it drives us nuts.”

On his inspiration board is an illustration of Bob Dobbs, figurehead for the Church of the SubGenius, a postcard saying, Life Is Hard, some storyboards that never saw the light of day, and the Shepard Fairey Obama cover of Creativity Magazine.

Townsend appears to be working off a Dell PC, but he’s hooked up to a laptop. He also keeps a 1986 Macintosh Plus on a pedestal in his office. “I’m a Mac guy,” he says. “I think Macs are the way computers should be.”

The circular object above his desk is a wall calendar that needs to be manually changed every day. Townsend (who got his start in New York at the now-defunct AC & R Advertising) picked it up, along with the Piet Mondrian lamp, at the Museum of Modern Art in Manhattan. Squares, rectangles, and circles also show up frequently in his work as a creative director.

“The reason the state adopted ‘The Way Life Should Be’ is that anyone can ascribe their own meaning to it, so all the stuff I have in my office are things I like and part of the way I think the way life should be. Like this picture of my wife, Hilliary, and daughter, Lily,” Townsend says. “Here, I have the freedom to do the things I love. And I guess that’s reflected in the chaos of my office.”