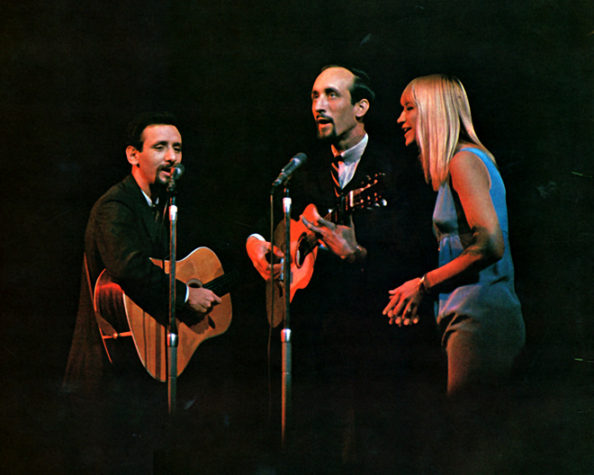 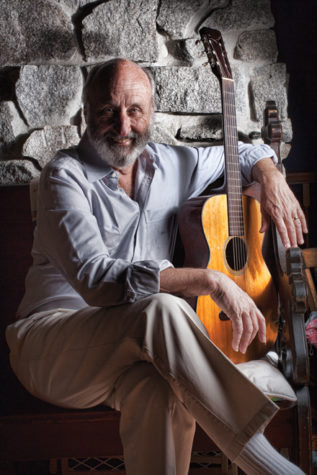 Stookey will be performing at the Opera House at Boothbay Harbor August 21 and at the Stonington Opera House August 22. 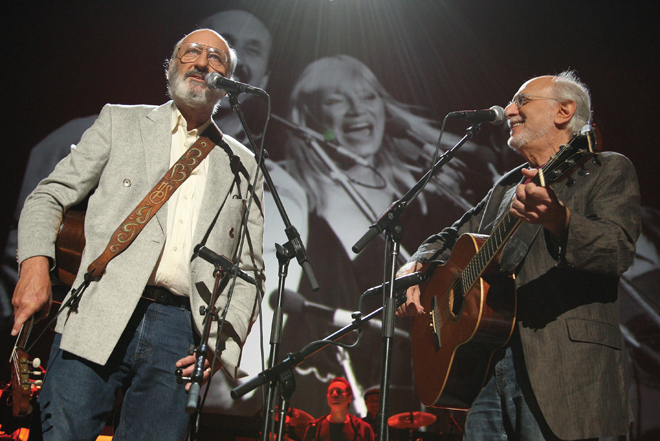 Stookey and Yarrow performed at a New York concert in the fall of 2009 shortly after Mary Traverss death from cancer.

Noel Paul Stookey, the tall, angular folksinger and guitarist better known as “Paul” in Peter, Paul and Mary, first came to Maine in 1970. He was taking a break from the hectic touring schedule of the wildly popular folk trio, which included 260 dates a year, several in foreign countries.

“My wife, Betty, and I were looking for a back-to-the-earth experience,” says Stookey. At the time, Stookey, then 33, was taking a hiatus from touring because he felt his life was out of kilter. He needed time to reflect and be with Betty and their three young daughters: Elizabeth, Anna, and Kate.

“We wanted to live in a place that was rural, friendly, and exciting. Blue Hill was perfect. So I moved my family from the New York suburbs to Blue Hill and became a gentleman farmer,” Stookey says, recalling that this period of change was also precipitated by a profound spiritual experience that resulted in his becoming a Christian.

Maine gave him the balance he sought, and it continues to renew him today. “Every time I return to Blue Hill, and take in the stunning tranquility teeming with life, so poetically represented by the ebb and flow of the ocean, I feel it’s a privilege to live here,” says Stookey. That love affair with his adopted state has lasted over 30 years—a relationship that is outlasted only by Stookey’s 47-year marriage. Betty Stookey received a master’s degree from Harvard Divinity School in 1997 and has worked as a chaplain at Northfield Mount Hermon, a private school in western Massachusetts, and Wesley Theological Seminary in Washington, D.C. The Stookeys have held joint appointments as chaplain and artist-in-residence at these institutions while keeping their home in Maine.

Noel Paul Stookey, who will play the Opera House at Boothbay Harbor on August 21 and the Stonington Opera House in Stonington on August 22, isn’t your average musician. He is an extremely prolific singer-songwriter, band leader, producer of children’s music and television shows, and a supporter of new artists through his company, Neworld Multimedia. His music continues the tradition of social change celebrated in folk music, while also expanding adventurously into jazz improvisation and romantic ballads. His insightful lyrics, like his beliefs, are highly principled, and he’s a man who “walks the talk.” In fact, it could be said that his life reflects, in microcosm, the evolution of folk music in America.

When the 20-year-old Stookey first moved to Greenwich Village from Michigan State University, where he was a student, he performed as a singer, guitarist, comic, and emcee at clubs like the Gaslight Cafe, where he first met Bob Dylan, also 20. In 1961, the fledgling folksinger Peter Yarrow, who was managed by Albert Grossman, went looking for a comedian and performer to join him in his act, and he found Stookey at the Gaslight. “He was brilliant,” Yarrow said, and he invited Stookey to join him. It was Grossman (who also managed Bob Dylan by that time) who suggested that they needed a “girl singer.” They chose the blonde, lithe, angelic Mary Travers, who had become a singing fixture in the Village. Grossman also suggested that Noel Paul Stookey change his stage name to “Paul” for the musical alliteration of the group’s name. When they rehearsed together, it worked. The trio Peter, Paul and Mary was born. Their rich harmonies and uplifting songs expanded folk music’s reach beyond Greenwich Village and Appalachia to living rooms, concert halls, and college auditoriums across America.

“When I first came to Greenwich Village at 20, I was an R&B ‘wannabe,’” Stookey recalls.

“It was a life-changing experience to become involved with folk music and to discover this amazing wealth of ethically driven music that we inherited from people like Pete Seeger and Woody Guthrie.”

When Warner Bros. Records released Peter, Paul and Mary’s eponymous first album in 1962, it soared to the top of the charts, where it stayed for two years. In August 1963, the trio sang Bob Dylan’s “Blowin’ in the Wind” and Pete Seeger’s “If I Had a Hammer” at the March on Washington, where Dr. Martin Luther King, Jr., gave his “I Have a Dream” speech. “Everybody in the folk idiom was connected to the civil-rights struggle,” Stookey says. “The musicians who were there—including Bob Dylan and Joan Baez—were all believers in the dream.” Peter, Paul and Mary continued to deliver hits throughout the 1960s, including “Puff the Magic Dragon,” “Leaving on a Jet Plane,” and “Early Mornin’ Rain,” among others.

Today, Stookey has 45 albums to his credit—28 with Peter, Paul and Mary and the remainder as a solo artist. After Stookey’s extended hiatus from the group in the 1970s, Peter, Paul and Mary reunited a decade later and resumed touring at a more reasonable pace. By then, Stookey had also established a flourishing career as a solo singer-songwriter. In 1971, he wrote “The Wedding Song (There Is Love)” for Yarrow’s wedding, and it became an instant hit. (Peter, Paul and Mary continued performing until 2009, the year that Mary Travers succumbed to cancer.)

Stookey directed all the proceeds of “The Wedding Song” to charity by establishing the Public Domain Foundation. The foundation has given away more than $2 million to “promote and facilitate the creation of cause-related music and further its impact upon issues and organizations of social and political justice.”

One of the most creative programs that Stookey and his daughter, Elizabeth Sunde, who runs the foundation, have developed

is Music to Life. The Public Domain Foundation invites artists to submit songs of social and political significance, which are then competitively selected and promoted through a variety of means—“soundtracks for advocacy,” Stookey calls them. A panel of ten judges—which includes Stookey and performers Kathy Mattea, Paul Winter, Janis Ian, Tom Paxton, and Cheryl Wheeler,  among others—select ten finalists to perform their compositions at the annual Kerrville Folk Festival in Texas. In addition, the three top finalists select charities of their choice to receive associated donations.

In recent years, the Public Domain Foundation has given grants to Adopt-a-Minefield on behalf of Kate Power’s song “Travis John,” and to World Relief on behalf of Zane Williams and his song “The Big Picture.” By so doing, the foundation helps these new artists build relationships with nonprofits that utilize their songs for promotional and educational purposes. “We’re in our tenth year of the program,”
says Stookey proudly, who adds that discovering the new talent is “very exciting.”

From advancing social change to singing, playing, and producing music that ranges from traditional folk to children’s songs to jazz, Stookey’s work leads him down many creative paths. His latest album, Facets, reflects his musical eclecticism. On the album, he performs the beautiful Rodgers and Hart standard, “My Funny Valentine,” a bluesy self-penned “By Myself,” and then segues to his Brazilian-flavored, classical-jazz composition, “Carmina B.”

At his August performances, Stookey will offer some of these selections, as well as some Peter, Paul and Mary hits so as to not disappoint those devoted fans who come to hear the trio’s timeless, inspiring songs. His repertoire includes both the old and the new. “As my friend Tom Paxton said,” Stookey adds, “it’s okay to look at the past, but you don’t want to get caught staring at it.”