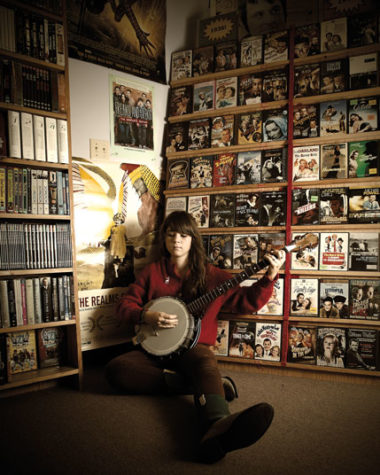 Aly Spaltro sits in Bart and Greg's DVD Explosion with her favorite instrument, the banjo. She worked at the Indie DVD store for three year, and turned its basement into her practice space. "Basically, that is my stomping ground from 11 p.m.to 9 a.m.," Spaltro says. "I recorded maybe 150 songs down there." 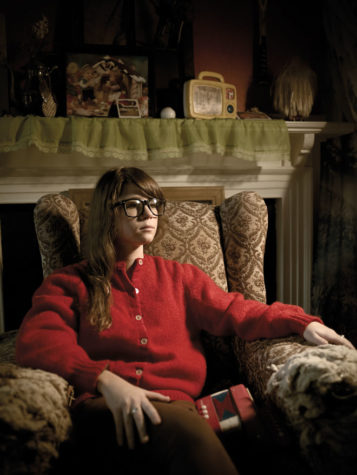 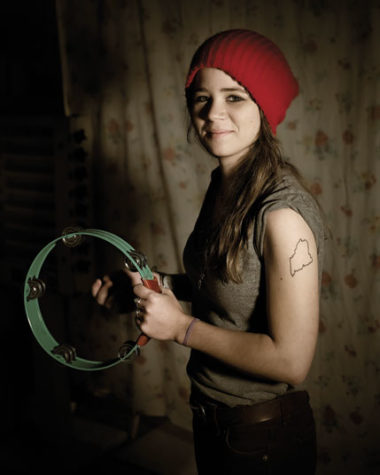 Spaltro has moved around often in her life, but considers Maine home. "There is no other city like Portland," Spaltro says. "It's a place you can focus on your music, and get it to where you want before taking it to a larger audience. I can't imagine having been anywhere else in the world."

PROFILE-January + February 2011
By Will Bleakley
Photographs by Michael Winters

Lady Lamb has packed her clothes, records, and instruments, and is leaving Maine’s coast for the bright lights of New York. She has a tattoo of the state on her shoulder, ensuring that wherever her career goes, Maine will always be with her.

Aly Spaltro, aka Lady Lamb the Beekeeper, is attempting to charm a pet fish. In a video on YouTube, Spaltro takes out her ukulele and plays for her fish Milicent, who had just lost several of her finned companions. “The best part is she kept coming closer, but in the last strum of the ukulele you can tell the depth—she came up to the glass with a face like this.” Spaltro opens her eyes wide, tilts her head, and recreates Milicent’s sad but curious face. “At the end of the last strum she flutters away.” Milicent died shortly thereafter, and Spaltro was there, ukelele in hand, to play her song “Until I Am Bones” as a eulogy. Until now, Spaltro has been something of a big fish in a small pond, a Portland artist with the ability to charm all species around her. But as she moves to the next stage in her career, a larger question looms: Can she do the same in New York?

Lady Lamb the Beekeeper arrived unannounced in the middle of the night. Three years ago, Spaltro experimented with lucid dreaming—the act of controlling one’s dreams. Although she never managed to master the technique, it did lead to a series of poetic midnight scribbles. One morning, in nearly indecipherable handwriting, Spaltro discovered her artistic alter ego’s moniker. “Lady Lamb the Beekeeper is a person,” Spaltro says. “To me, she’s a classic Victorian sort of woman.”

Spaltro’s style contrasts with her tiny build and youthful features, accentuating the divide between her real age (20) and her persona (age as listed on Facebook: 92). Her style is granny-chic. She wears oversized cardigans, large Woody Allen glasses, and drives a 1992 beige Chevy sedan. Her five-foot-two frame emits a sound that’s a raspy mix of Billie Holliday and Joanna Newsom—a voice that suggests she’s world-weary but excited to be so. Her songs range from ambling banjo tunes about driving in Maine and drinking Dr. Pepper to gritty electric-guitar ballads during which Spaltro pushes her emotion-filled voice to the breaking point. It’s music that’s moving and soulful, but with a sense of humor.

On a rainy October day in the Mornings in Paris coffee shop in Portland’s Old Port, Spaltro is busy sipping coffee and coloring. A series of brightly colored markers are spread out in front of her as she fills in the white space of her own outline. She’s designing the cover of a series of cassette tapes called “Lady Lamb the Bee-sides,” which she plans to sell at her farewell concert at SPACE Gallery. Spaltro is leaving Portland for New York City, and she’s invited the state to see her off. “I’ve just begun to feel really stagnant Lady Lamb–wise. I love Maine with all my heart, but I need a challenge,” Spaltro says. After three albums in three years, Spaltro is a fixture in the Portland music scene. Yet she possesses a quality that’s unusual for the state—a constant yearning for unease. It’s her confidence and this desire to face the unknown that sets her apart.

Spaltro grew up in a military family that relocated every three years. “I grew up knowing that, wherever I was going to, I’d be leaving. To my closest friends I’d have to say, ‘All right. This is it. See ya!’ Then we wouldn’t really keep in touch,” she says.

Although she was born in New Hampshire, Spaltro lived in South Carolina, Arizona, Nevada, Germany, and Maine before she entered ninth grade. “I was a strange, mature little kid,” she says. “I had friends my age, but in the back of my head I was just like, ‘This is child’s stuff. I’m just playing the part.’” When most kids explored the sandbox at the park, Spaltro sat to the side, headphones on, listening to Stevie Ray Vaughn or Beethoven.

According to Spaltro, when she was five and living in Phoenix, her best friend, a thirteen-year-old named Lacy, introduced her to The White Album. “That changed my life,” Spaltro says. “I began just delving into songs intensely and individually.” Despite having a happy upbringing, she purposefully isolated herself through music, knowing it could be a lone constant through her travels.

When she arrived in Brunswick during summer of 2004, it was the first time Spaltro felt at home. It’s also where she found her artistic voice. She started experimenting with spoken-word poetry, while dabbling in watercolors, film editing, and photography. When her funding fell through for a planned year abroad before college, it forced her to stay at home for a year—and that’s when she found out what the state could offer her musically.

She landed a coveted job in 2007 at her local sanctuary, Bart and Greg’s DVD Explosion, an indie store in Brunswick, and turned its basement into her musical lair. With some simple recording equipment, and no musical training, she began experimenting with sounds for hours into the night. “I can’t even begin to say how many times I’ve been working from eleven at night until nine in the morning in that basement just trying things out,” she says. “I’ve fallen asleep there in my open hard-shell guitar case curled up in a fetal position.”

The first song she recorded is a five-minute, spoken-word mixture of layered effects and loops that she titled “Lamb in the Swarm.” It was a song Spaltro didn’t even recall making a day later. “My earliest recordings were really overwhelming. It was just a mess. I gave them to my boss Bart, and he said, ‘They have potential, but they’re too heavy-handed.’” So she spent two weeks recording sixteen new songs, and handed him an album. In this back and forth with Bart, Spaltro found her passion in music.

She began working with multi-instrumentalist T. J. Metcalfe, and together they would spend hours working in the basement, fueled by insufficient sleep and Dr. Pepper (the only product Spaltro would gladly sell out for), coming up with catchy acoustic love songs. Creatively, the duo began to fizzle after a year. While they remain friends, Lady Lamb is now a solo project, which allows Spaltro more freedom with her music. “Since then, I’ve really honed my sound and begun to write wordy songs with tons of tempo changes that I’ve tried to keep interesting and innovative,” she says. While still melodic, Spaltro has expanded her repertoire through continual experimentation.

When Spaltro started playing coffee houses and bars around Brunswick, Bath, and Portland, she quickly collected positive reviews and fans. “I saw her play at an open mic at Slainte,” Will Ethridge, of Eternal Otter Records, says. “She’s this very small girl, with a really huge voice, and she has a gift that makes people shut up and listen.” Her music inspired Ethridge to start a record label and put out a Lady Lamb album as his first project. Titled Samples for Handsome Animals, the album is a collection of the best of Spaltro’s work until that point.

With the release, her fan base grew, and she soon became a regular on the Portland music scene. “There’s nothing like playing a show in Portland,” Spaltro says. “There’s nothing like the support and community here, but I feel like I’ve become too comfortable.” She knows she won’t have the same level of support in New York, and this youthful-looking girl with an adult outlook will again have to prove, to new friends and audiences, that she is worth paying attention to.

In preparation, she’s gotten rid of all her possessions except the necessities (clothes, instruments, vinyls, a traveling record player), and feels liberated. She’s armed with two weapons: a show-stopping voice full of depth and soul, and a belief that “if you are dedicated enough, and determined, and you just keep playing, people will begin to listen. Everyone has a heart.” Before leaving though, she wanted one last hug.

The “Farewell for Now, Lady Lamb” Extravaganza oversold SPACE Gallery. Dozens of people could be seen out in the street, and hundreds of fans crowded the stage to give Spaltro a final send-off. A number of friends opened for her, including Jacob Augustine, Pearl and the Beard, and Panda Bandits. Onstage, Spaltro’s energy was captivating, “It doesn’t matter if I want to get offstage, or if I’m shaking, or angry and need to decompress. You have to figure out a way to wire yourself so you can give it everything you have,” she says. For nearly three hours, she did just that, taking the audience with her from comic ruminations on finding cheeseburgers late at night, to the emotionally wrenching “Crane Your Neck,” which left Spaltro several feet from the microphone yelling at the top of her voice.

For her final song, Spaltro brought up friends from throughout her career to perform with her. The group of twenty to thirty people overflowed the stage, and the entire ensemble launched into a rendition of “Home” by Edward Sharpe and the Magnetic Zeroes. It was at once chaotic and touching.

There was an odd, but fittingly parental moment between the audience and Spaltro as she sang the final lines of the song, whose lyrics are “Let me come Home/Home is when I’m alone with you.” She was announcing herself ready to leave the nest, test her limits, and try to create something we will all be proud of. She knows she’ll be welcomed back, with open arms, regardless of how her new journey fares. “The show to me was a way of saying thank you to Portland,” Spaltro says, “Thank you for supporting me and thank you for following me and being with me all these years. See you later. I love you.’”