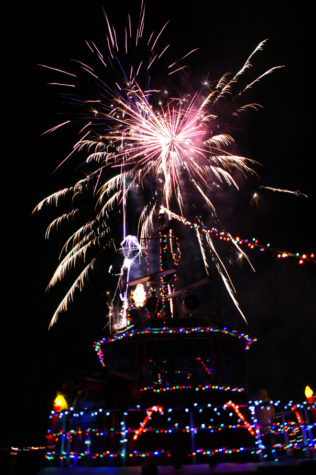 Where are you from?

Boston, born and raised. Now I live in Scarborough. I’ve been here for twenty years.

What’s in a typical day?

Docking ships. That’s what we do. That’s our primary function: to safely guide and dock ships in Portland. We operate five tugboats and primarily assist tankers and other various cruise ships in and out of Portland. We employ 15 people—local guys.

How long have you been driving boats?

I’ve been doing this my entire life. That’s no joke. Forty years.

You and your crew are known for doing fireworks off a tugboat every year on the fourth of July. How did this come together?

We first started in 2003, and it’s grown each year. We have our own private show set up on the Fourth as an addendum after the finale of the Portland fireworks show. It’s really Junior’s [deckhand Peter Rodriguez] thing: he takes the lead and sets everything up on the stern. Last year’s show was about ten minutes long. We’ve gotten many compliments and never had a complaint. We do two shows now, one on the Fourth of July and one around the holidays for the Parade of Lights—a little Fourth of July in December, if you will. This year we’re going to be involved in a show for the thirtieth anniversary of the MS Harborfest Regatta. It’s fun; we love it. We had a softball team one year, but that didn’t last. The fireworks display has.

Who pays for the fireworks?

The crew collects cans and other recyclables throughout the year and they put it into a general fund, which can be used however they want. I match whatever they end up collecting at the end of the year. The money mostly comes from cans and bottles, but it’s also scrap metal we find on the tugboats— you’re always removing and replacing metal on a tug. We’ll take that and add it to the fund. The past five or six years, we’ve put it to a fireworks show. It’s an annual event for us now. It’s become expected.

We’re not fancy pyrotechnicians, but we take plenty of precautions. The tug pumps 10,500 gallons of water a minute and has a full apron of water around it. God forbid, but if you set something on fire that shouldn’t be, you just hit a switch and the whole boat will go out. One year a recreational boater got a little too close to us and the Coast Guard grabbed them. They want to make sure things are safe around us. I mean, we’re a commercial tug- boat—we don’t want too many people nearby, especially at the stern of a tractor tug. There’s a lot of water moving back there.

Sounds like you guys have it pretty well figured out.

We know when the finale is coming for the Portland show, and we’ll start inching our way back toward the inner harbor to stay away from the traffic and congestion when we set them off. Kind of like the pied piper, they follow us in and get back to the harbor safely. We act as a beacon, if you will.

So it’s really all about bring people back in safely?

[Laughs] You’re catching my drift. We like to think we’re doing the public a service. We look forward to it all year round.