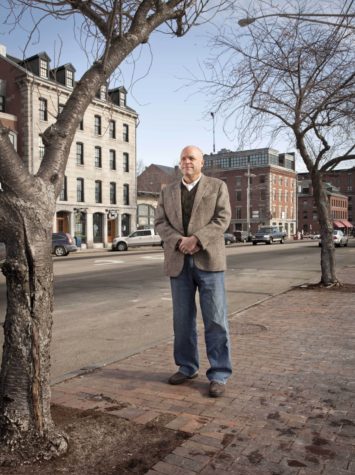 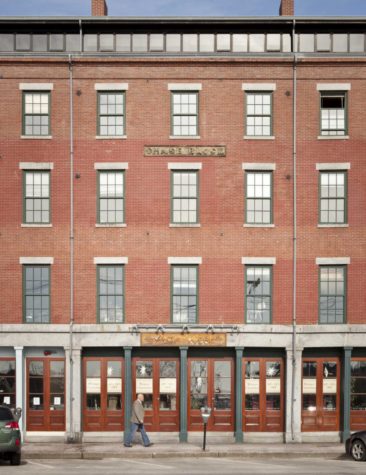 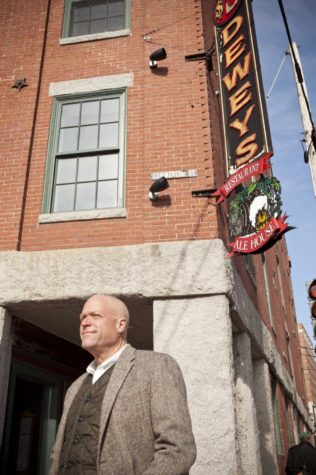 Idealistic and pragmatic in equal measures, Hagge's the sort of dreamer willing to get his hands dirty. "I love to build things," he says. "Happiness is 100-year-old dirt." 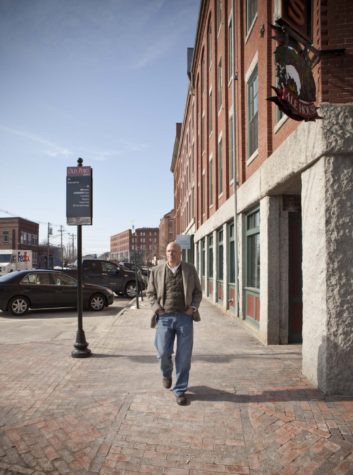 Cyrus Hagge strolling down Commercial Street. His life hasn't always been easy, but he's one of those rare people who manages to transform failure into possibility. "Pain," he says, presents us with "an opportunity to break a pattern." 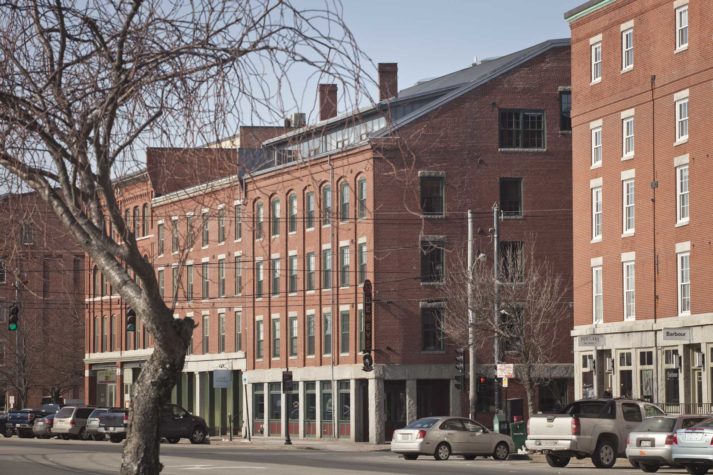 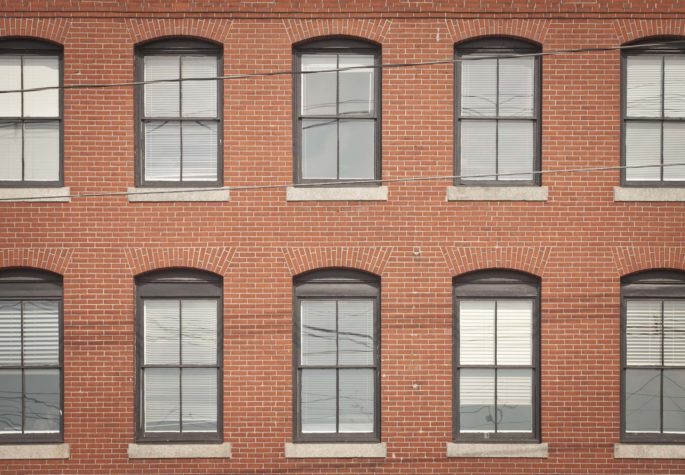 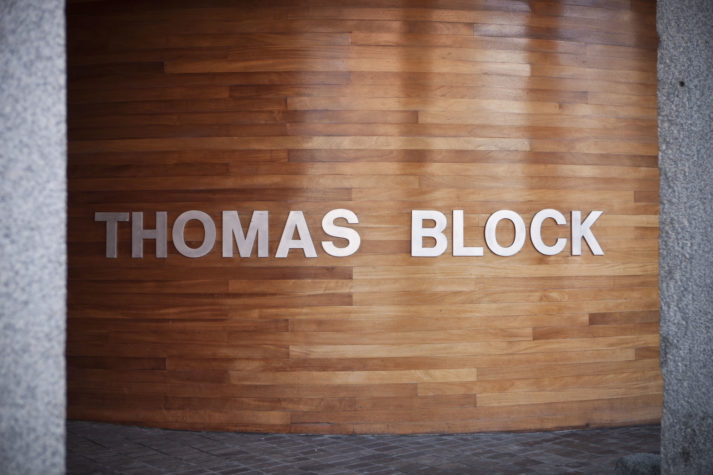 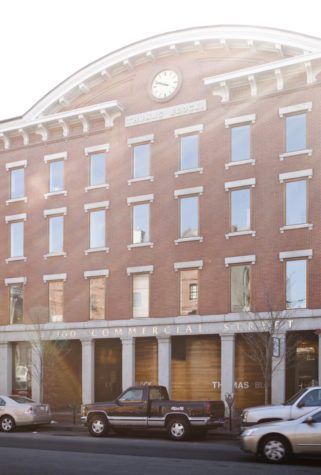 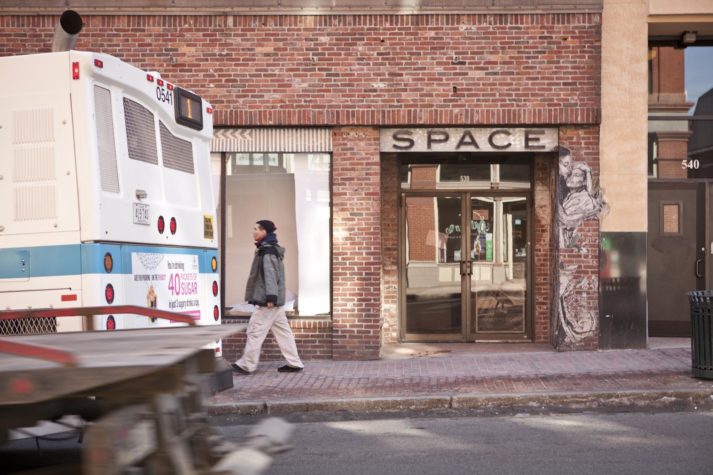 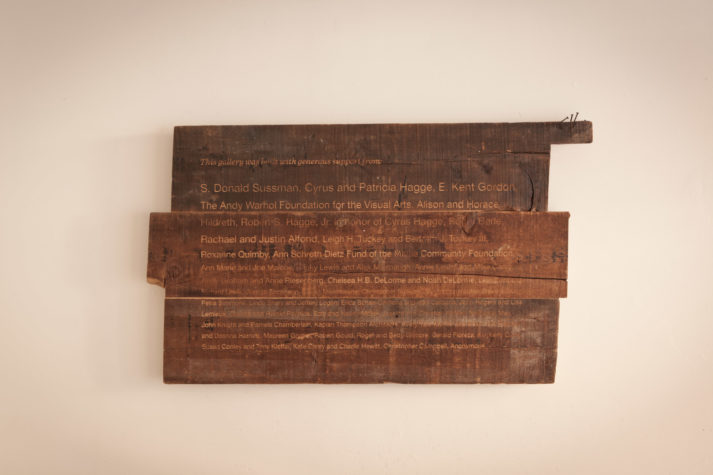 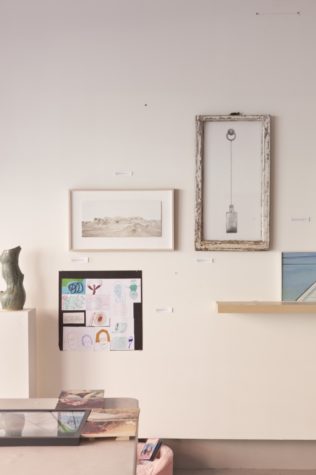 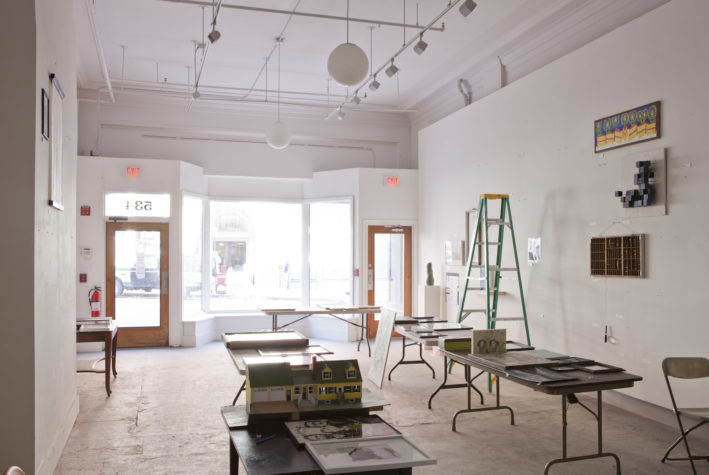 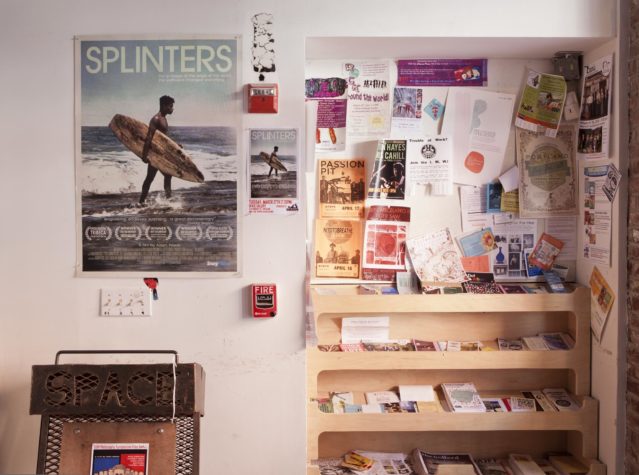 (Not) Just Another Hippie
The Life and Times of Cyrus Hagge

It’s 1976. The Bicentennial. America is 200 years old and still getting made. In Boston and DC and Philadelphia, the streets are filled with parades, confetti, television crews. Oh say can you see, by the dawn’s early light…

In Portland, in the dawn’s early light, a bunch of long-haired carpenters wipe sleep from their eyes and prepare for a long day of work.

Cyrus Hagge and a ragtag band of builders, artists, and dreamers have landed in the Old Port. They spend their days banging nails, serving food, snapping pictures, and doing whatever they feel called to do—or whatever will put food on the table. Then, at night, on days off, they party. Hard. Together. This collectivism is thrilling to the 24-year-old Hagge. Volleyball on the Eastern Prom. Friday-night dinners at Amigos. Weekends frittered away on a rope swing over the Saco River. “Everyone knew everyone,” Hagge says. “It was a time of wonder.”

When Hagge talks about the “scrappy days” of the Old Port, one sees a wistful, glassy-eyed man. One sees a man in love. This is the place that took him in when his family said it was time to leave home. This is the city that helped make him. Or perhaps, given all he’s accomplished, it is more accurate to say that it is the city he took in, a city that he helped make.

Let’s jump ahead a few decades. Today, Cyrus Hagge is an Old Port denizen, a successful developer, fundraiser, philanthropist, board member, and connoisseur of music and art. He is a husband of 33 years and the father of three grown children. He is that tall, bald, confident man you see striding down Commercial Street, chatting on his cell phone, an impish smile on his lips.

While Hagge may well be one of the hardest working men in the state, he appears strikingly unruffled. “He has a certain relaxed way of dealing with the world,” says Nat May, executive director of Space Gallery, where Hagge is on the board of directors. “He lets the world be what it is.”

An accurate statement, and yet it’s a curious thing to say about a man who’s done so much changing of the world around him. That’s the paradox of Cyrus Hagge. He doesn’t push his values on people; he gives the impression of being basically content. And yet he’s constantly trying to change things, to make Portland better, and to create more opportunities for children. He is a fascinating blend of “live and let live” and “I’m not going to stand for this.”

Over the years, Hagge has served on a number of boards—Casco Bay Lines, the Portland Planning Board, the Waterfront Development and Master Planning Committee, and the Cumberland County YMCA, to name a few. He is currently on the boards of Space Gallery and the Portland Downtown District. He also serves as the president of the board for Rippleffect, “a community-based youth development organization specializing in adventure and wilderness experiences that build confidence and self-esteem.” He and his wife, Patty, are devoted to the Telling Room, a nonprofit working to give children and teenagers the voice to tell their own stories. Hagge is widely known to be an uncannily successful fundraiser, a boon to boards, and a man whose vision can radically transform a struggling operation.

Hagge says he believes in “microphilanthropy.” He doesn’t give to national charities, and he doesn’t buy buildings for universities.

“I asked myself: How can Patty and I support this community? What can we do that’s different? We realized we can influence these little organizations that do a lot of good. I can balance the budget and keep a small nonprofit going. We can influence local kids, help them learn.”

This is a man who would rather have a toilet named after him than a building.

One must wonder: How does such a philosophy develop? What forces put this man into motion?

A devoted Mainer, Hagge was born and raised in the Midwest. He grew up the youngest of four children in Wausau, Wisconsin, a manufacturing and insurance town of 30,000. His parents divorced when he was in sixth grade. His father remarried soon after. A few years later, his mother married the FBI agent ex-husband of his stepmother. Got it? And while his story seems to be the stuff of soap operas, Hagge insists it was just ordinary life. The two families lived just blocks apart and got along in peace.

But when his mother remarried, he was the only child left at home. “I got pushed out of the nest,” Hagge says, no trace of emotion in his voice. Did he want to leave home so young? “No,” he says, shrugging. Could his father have taken him in? “My father didn’t want me.”

He describes these early events casually, without emotion. One senses no grudge. But how did a 15-year-old boy possess the internal resources to manage such a situation? Precisely how painful was his exile? “It was painful,” he says, without much conviction. “It was—but it wasn’t. There was no future to build a life in Wausau. I was on the road. I had to find a place to live. So I left.”

He makes it sound so simple. In 1967, at the age of 15, he arrived at Hebron Academy in Hebron, Maine. What happened next gets a little complicated, but here’s the gist: Hagge had great difficulty reading and writing, and dropped out of school after two years. He spent a summer back in Wisconsin, apprenticed with a carpenter, where he learned that he loved to build. He also got involved with a girl. At the end of the summer, the girl announced she was pregnant. He was assumed to be the father. Hagge’s stepfather intervened, sending the unwed mother to Florida where the baby would be given up for adoption. Hagge was told to stay away from Wisconsin, and that he should never—for any reason—tell his mother what happened. (It was 30 years later, long after his mother had died, that he learned through a DNA test that he was not, in fact, the father.) Again, it seems the stuff of soap operas, ripe with potential melodrama, but coming from Hagge’s mouth it’s just, well, what happened.

Hagge left Wisconsin for good, returned to Maine on his own, lived in a house with other boys, and attended the Village School, a “hippie school” in New Gloucester. Soon afterward, he started a small landscaping business in Brunswick, then went to technical school to learn the building trades. In 1977, Hagge started a successful general-contracting company, Renaissance Building and Design, which specialized in the restoration of historic properties. In the 1980s, during the economic downturn, he went back to school, earning a bachelor’s degree in business and then an MBA from the University of Southern Maine. Afterward he founded Project Management, Inc., another thriving company.

“I quickly figured out I was a little brighter than most, and I started to get some vision. I found people to execute my vision. I leveraged up and up until it got to the point where, at 60, I get to live a different life than I did then.”

How did he overcome early failures and losses—of which, he admits, there were many? How did he avoid the emotional baggage that weighs down the rest of us?

Hagge credits a particular teacher, Bill Anderson, at the Village School. “He was a philosopher and an existentialist, and he made me understand that we are the products of the decisions we make. We’re not controlled by fate. Life is just a series of small decisions—you can shape your life and do things you want to do by making decisions that are manageable, decisions that you build on over time.”

Perhaps some of his contentment derives from putting art at the center of his life. Andy Graham, who knocked about the Old Port with Hagge in those old communal days, and who now serves alongside him on several boards, notes that Hagge’s devotion to the arts is not common. “Traditionally, a developer’s analysis is based on return. But when you analyze things only on potential return on investment, you leave out community values… values that have cost attached but, in terms of the health of the community, are very important. Cyrus manages to be both a developer and to be generous in spirit to the arts.”

“I never knew he would have done what he’s done,” Graham adds. “He was just another hippie like the rest of us!”

Today, Hagge devotes his time, energy, and financial resources to organizations that help kids learn, read, tell stories, and master new skills. In short, he wants to help kids thrive. He goes about his new projects without fanfare or self-congratulation. Even now, the long hair long gone and the Old Port a radically different place, Hagge embodies those compassionate, communal ideals that characterized his formative years.

His advice for young people is simple, revealing, and wise: “Make lots of mistakes. Learn from what you don’t like. Find something you love to do and pursue it. I recently realized I don’t have enough time ahead of me to do all the things I love to do. If you’ve got something you’re passionate about, chase it down. Don’t hesitate.”

The window of his office on Commercial Street looks down at Casco Bay and boats bobbing in the harbor. He gazes out at this city he loves—the city that transformed him and that he helped transform.