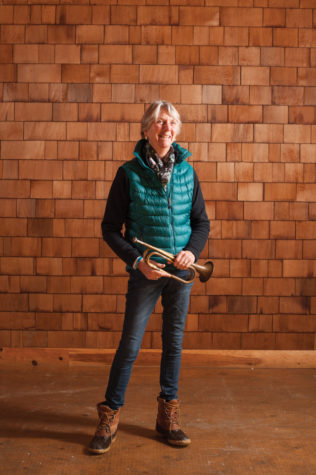 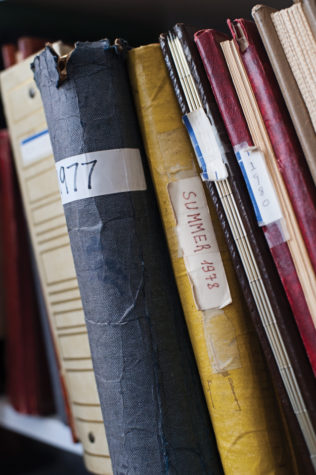 Life at camp over the decades has been extensively chronicled through photography, journal entries, and letters. 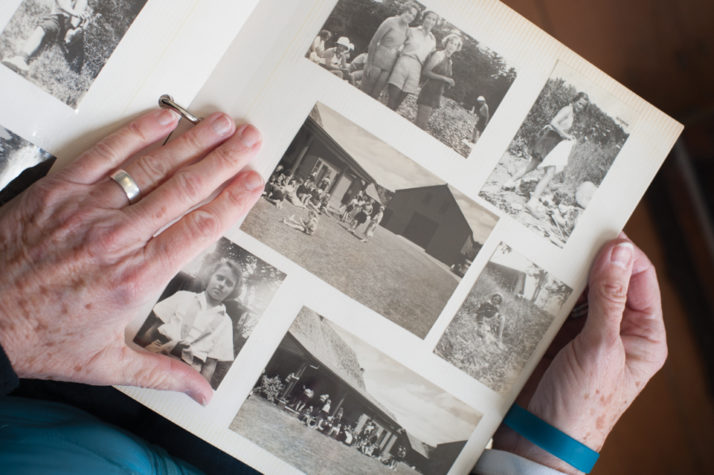 Over the course of its 108-year history, Alford Lake has changed the lives of many thousands of girls and women for the better. 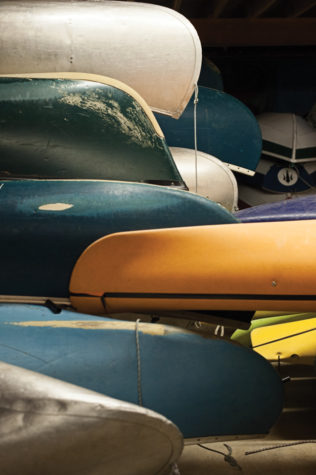 A summer scene: canoes of many colors near the waterfront. Alford Lake is one of the cleanest lakes in the state. 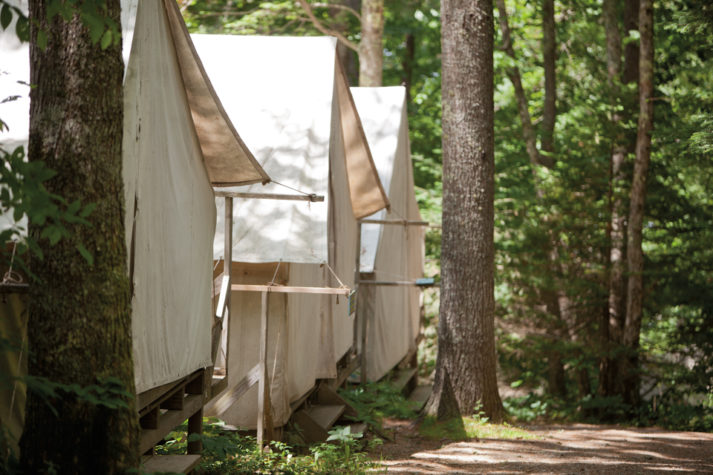 Canvas tents made by a sailmaker in Camden are home for campers during the summer (by Robert Burke Photography).

In 1970, nineteen-year-old Sue Stocker showed up at Alford Lake Camp a little skeptical. Born and bred in Portland, Sue had studied psychology at the University of Maine because of her interest in child development and her hope to someday work with kids and young adults—just not so much at a summer camp. She’d spent time at a couple of different camps over the years; “I didn’t love it,” she says with characteristic generosity. But then, at a friend’s urging, the young college student found herself in the living room of Alford Lake Camp director Jean McMullan discussing job opportunities. It didn’t take long: one season at Alford Lake turned Sue into a camp convert. She was inspired by the people she met—girls and women from all over the world whom she found to be exceptionally kind and adventurous—and by the positive changes she witnessed in the campers and counselors over the course of the summer. “You could actually see the difference you were making,” she tells me. The following summer, she returned as the tennis counselor. And the next summer, she was back again. After just five years—despite what McMullan refers to repeatedly as her “goofy” nature (and honestly, probably because of it)—she had gone from uninitiated newcomer to one of the camp’s few year-round employees. In 1993, she became co-owner of ALC with her then-husband, Jean’s son. She has been sole owner since 1998.

On the bright, winter day when we meet, Sue Stocker McMullan vigorously leaps from the SUV the barely plowed camp roads require with a white smile flashing in her tan face, a playful flick of her short hair. I have a hard time believing that this will be her forty-sixth summer at Alford Lake Camp. With McMullan busy zigzagging around the country meeting with alumni, parents, and prospective campers, it was a challenge for us to find a time to meet. (If you think camp directors are inclined to relax in the winter, to lounge about fireplaces with cups of tea gathering strength for the coming summer, let me introduce you to McMullan.) Making plans over the phone, her warmth and generosity drew me in; in person I found these qualities overwhelming in the best sense.

Later, when I mention this warmth to former camper and counselor Lani Toscano says, “Sue has the ability to make a person feel as though she is the most important person in the world.” I don’t know McMullan as well as Toscano, but I know exactly what she means. “Sue’s often the first phone call new college students will make when they need emotional guidance and support,” she says. “People don’t realize that Sue’s taking care of campers and counselors year-round.” One of these campers is Maizley, Toscano’s 11-year-old daughter, who is preparing for her fifth summer at Alford Lake (although in accordance with an ALC tradition, the summer she turned one would count too, making this her sixth).

To get to the Alford Lake Camp farmhouse, the administrative headquarters attached to the dining hall, McMullan and I trudge through knee-deep snow. Once inside, she walks me through the rooms, explaining what goes on where through funny anecdotes and chuckles. Despite the freezing temperature, we spend significant time flipping through photo albums and marveling at portraits of the camp’s founders and former directors on the mantel above the fireplace. McMullan is part of a legacy of intelligent, energetic, and caring women, who have all been important figures in the camp movement.

Alford Lake Camp started in 1907 as one of the first girls’ overnight camps in the world. By then, boys’ overnight camps were rapidly growing in popularity, but the answer to the question: “Can young women survive and prosper in the great out-of-doors?” was actually up for debate. ALC’s founders, Dr. Susan Kingsbury and Miss Florence Marshall thought yes, and, purchasing land on Alford Lake in South Hope—several miles west of Camden—for $2,610, they set out to prove it. Dr. Kingsbury was a professor of economics at Simmons College at the time, while Miss Marshall was the director of the Boston Trade School for Girls. They agreed about the importance of teaching girls practical skills, and that the challenges of camping and competitive sports would foster personal growth and “general excellency” in young women. The pair prevailed, and for many decades now, about 250 eight- to-fifteen-year-old girls have been coming to South Hope, Maine, every summer from all over the United States and the world.

There have been some changes over the years. Originally the summer camp session was eight weeks long. The full session has been shortened to seven weeks, and the option to attend a three-and-a-half-week session is now available. There are also options to take “Global Challenge Trips” to Nova Scotia, the Alps, and the Appalachian Trail. For all of these camp sessions—on campus or off—McMullan has made a point of incorporating a community service element. But looking back through some of the photographs, letters, and journal entries that have been collected in log books dating back to 1909, I’m less surprised by the wool bathing suits and floor-length skirts than I am by the fact that many of the early twentieth-century letters describing a typical ALC day are indistinguishable from those written in the twenty first. Friendship is a prevailing theme. Campers still make their way across the dew-covered lawn for breakfast. They still sing together, and play together, tuck away into the crafts room on a gray afternoon or swim on a sunny one—the choice has always been theirs.

“Basically the core of all of this is enabling young people to feel better about who they are in an extended family situation, where there is warmth and caring,” says McMullan. “They learn to connect with people on a deeper level. They learn how to get through struggle and how to succeed. And then they go out and make a difference in the world. My mother-in-law [Jean McMullan] always reminded me that this is one of the finest forms of education we can give our children.”

In the wood-paneled dining room, after much coaxing, McMullan brings a beat-up bugle to her lips and plays taps like someone with decades of practice under her belt. The windows are boarded up for the winter, but I sneak peeks through the cracks, imagine the sloping lawn green, the rows of platforms covered in Alford Lake’s signature white canvas tents (made, I’m told, by a sailmaker in Camden). I imagine being a young girl inside of one of those tents, preparing for bed to the sound of crickets and that bittersweet song, uncertain of what the next day would bring, but knowing it would start with reveille and that it would be a good one—because even the toughest days at camp tend to be good. Often because of McMullan.

Toscano tells me, “She’s like a beacon that people are drawn to. She’s so self-effacing, so real, you can’t help but be real with her yourself. And when we’re real, we’re better campers, better counselors. Sue creates a super-safe environment for people to be themselves, and to bring out the best in themselves and in each other.” McMullan never consciously worked toward the goal of becoming camp director. In fact, despite almost three successful decades in the role, I get the sense that she still feels a little bit like the goofy twenty- year-old tennis instructor shrieking at the bat someone hid under the upside- down cup on her lunch tray. She no longer condones such behavior, but silliness is allowed—is encouraged, in fact, under McMullan’s leadership. More importantly, so is graciousness, and putting others before yourself. Through our conversation, McMullan wants me to understand that Alford Lake Camp’s programs and traditions are not lost on her. Year after year, the camp experience makes her a better person, too.

“I kept returning because I found Alford Lake to be such a great place to give of myself and see a difference,” she says. “I’m not perfect. I have to say that I still take it one day at a time. And day after day it has become a life’s work.”