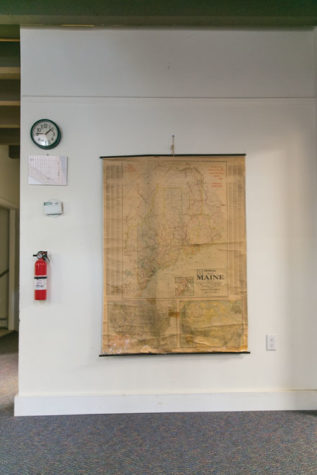 A map of the state Phillips has helped shape both economically and socially, for the betterment of all Mainers and especially those with low incomes. 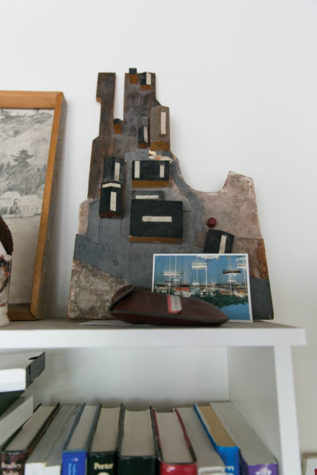 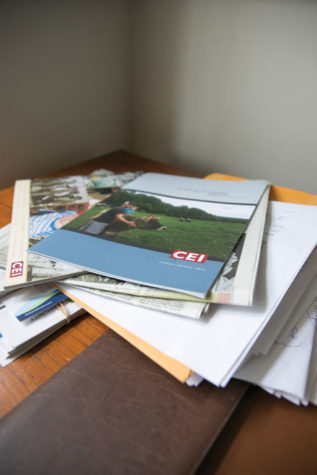 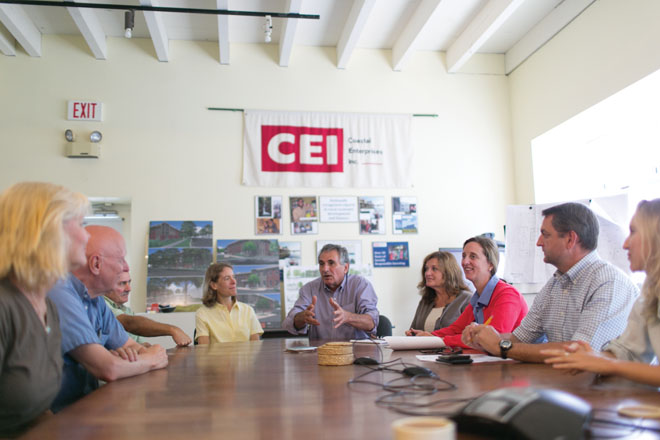 Phillips looking ahead to his retirement in the summer of 2016: Weve got a great group of next-generation developers on board 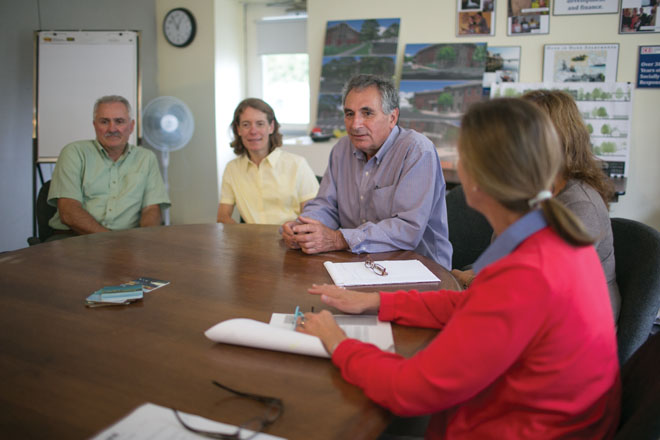 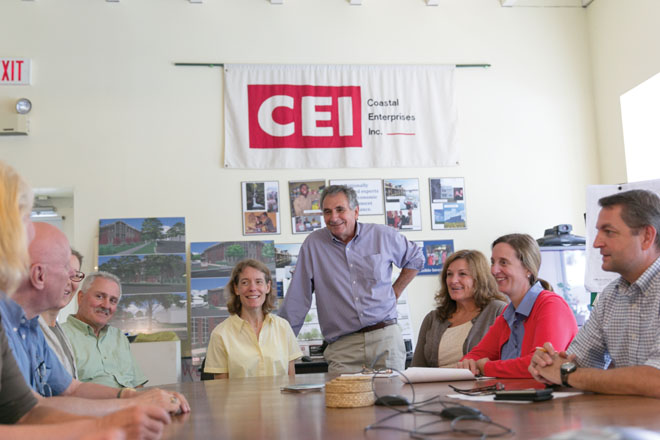 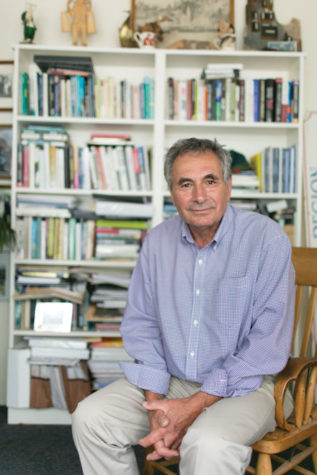 Nationally regarded for his outstanding leadership in the area of community development, Ron Phillips, president and CEO of CEI, has made an indelible impact on Maines economy.

Ron Phillips has been helping shape Maine’s economy since 1977.

Late on Tuesday, March 21, 1978, a fire broke out at a fish freezer and processing plant on Atlantic Avenue in Boothbay Harbor. By early Wednesday the facilities were destroyed, and that Friday management met with the plant’s 28 employees to discuss the shutdown of operations which, given development pressure from tourism-related business, threatened permanent closure. The potential loss of the Boothbay Region Fish and Cold Storage, Inc., was worrisome not just for its employees, fishermen, and the community of Boothbay Harbor, but as an indicator of the state of fisheries in Maine: by the late seventies, commercial fishermen were already having an increasingly difficult time accessing the waterfront.

In the spring over 200 people—mostly from the Boothbay Harbor community— showed up at a meeting to discuss the future of the town’s working waterfront. Among them was 35-year-old Ron Phillips, a recent seminary graduate and civil rights activist in the process of creating the state’s first Community Development Corporation (CDC), with a mission to, in accordance with the language of the Title VII amendment of the Equal Opportunity Act “ameliorate the conditions of poverty by creating income, employment, and ownership opportunities for area residents” in Maine. Backed by the governor’s office, Phillips was piecing together the skeleton of an organization called Coastal Enterprises, Inc., modeled on the types of “third world” grassroots economic development he encountered in his work with various national and international church missions, but he had yet to take on a financing project of significant size when he offered to help redevelop the plant.

The story of CEI more or less begins here: with an idealistic and deeply practical young man with a messy crop of hair who brought big ideas to a town hall meeting in midcoast Maine. Along with a core group from the fishery, Phillips went on to raise capital through the federal government and the First National Bank of Damariscotta, and to put together a package to help rebuild the plant, which included a class of stock ownership that Boothbay area fishermen and residents could purchase as a locally owned venture. Aggregating capital from a variety of private, public, and community sources to promote value-added production capacity and local economic growth: “There’s CEI for you,” says Ron Phillips. After securing the $300,000 in financing that allowed them to rebuild, modernize, and expand the facility, and after receiving CEI’s first capital grant, Phillips began to build the organization’s capital base, to expand CEI’s workforce, and to diversify and undertake more projects in a range of investments in natural resources and job- creating small business investments.

Since its foundation, with Phillips at the helm, CEI has mobilized over $73.4 million for the Maine fisheries sector alone, in 237 separate loans and investments, which have created or retained 2,177 jobs, and helped protect about two dozen working waterfront facilities along the coast—and fisheries and aquaculture is just one of the eight sectors of Maine’s rural economy that Phillips and his colleagues have chosen to focus on during CEI’s nearly 40 years in existence.

To get a better sense of the impact CEI has made in fishing communities, multiply the time, energy, and resources it took to get the Boothbay Harbor plant up and running again by something like 237, and multiply that amount by eight. This is very rough but eye-opening math.

Here are more numbers: CEI has mobilized over $300 million in financing for 2,460 business ventures and housing projects, created or sustained more than 30,650 jobs, and provided business advising and housing counseling for 46,449 people. Both a CDC and Community Development Financial Institution (CDFI), CEI has grown to include several subsidiaries and affiliates, like CEI Ventures, Inc., which invests venture capital in job-creating businesses, and CEI Investment Notes, Inc., which gives individuals and organizations an opportunity to get a financial return on investments that contribute directly to the growth of Maine’s economy while they enjoy the resultant environmental, economic, and social benefits. As the largest allocator of economic development tax credits in the United States, CEI Capital Management LLC is responsible for deploying hundreds of millions in capital allocated by the U.S. Treasury Department’s New Markets Tax Credit program to businesses throughout rural America. Since 1977, CEI has leveraged a total of $2.74 billion in financing along with its private and public partners to become one of the most well-regarded CDCs and CDFIs in the country. The man who started it all, Ron Phillips, has been the recipient of countless state and national awards, including, in 2013, the Ned Gramlich Award for Responsible Finance, which is the highest individual honor in the CDFI industry.

While far from a complete picture, this more or less brings us to the present. While we talked in his Wiscasset office on a rainy afternoon last August, Phillips pulled down a dusty model of the Boothbay Region Fish and Cold Storage plant, built upon a plywood base, with brown rectangles representing the various storage and production facilities labeled in handwritten tags. Ninety employees later, CEI’s flagship project remains a go-to example of the kind of work Phillips set out to do when he and his wife moved their young family to her home state of Maine in the mid-seventies. Above his desk is a black-and-white photograph of Suzanne Phillips, a painter, whose abstract expressionist work is displayed in the office along with old family photographs, plants, and shelves of books which Phillips scans like an absent-minded professor as he refers to movements, groundbreaking legislation, and authors that fueled him along the way. He is a generous man, inclined to wonder about you, inclined to smile, and inclined to joke. When winding up to discuss anything theoretical, he would tend to lose steam, ask if he was boring me. For the record, I was not bored for one second.

The first generation son of Albanian immigrants, Phillips was raised primarily on Cape Cod, where his grandfather worked as a fisherman and his father as a doctor. Growing up in the sixties— after the publication of Rachel Carson’s revolutionary Silent Spring and Michael Harrington’s The Other America, in the midst of the civil rights movement and Vietnam War—made an indelible impact on Phillips, who studied literature and philosophy at Boston University and at the University of Strasbourg in France before beginning seminary at the progressively minded Union Theological Seminary in New York City in 1969. Later on he would serve as a delegate to the United Nations’ World Summit on Sustainable Development, join a Maine delegation to Cuba to learn about their health and agriculture system, and complete a study in business management at the Harvard Business School.

Throughout his twenties, Phillips grappled—and still does—with the question, “How does faith in the goodness that is within each of us translate into social and economic justice?” His work in domestic and international economic development at the National Council of Churches and the Interfaith Center for Corporate Responsibility led him to collaborate with grassroots organizations in Harlem, rural Georgia, and Puerto Rico, among other places. “I was inspired by all of this exposure and those early days advocating for inclusion and opportunity of the African American and other minorities at the margins of the economy.” All over the world, he met people who were “doing things instead of talking about things,” he says, and he realized that, “in order to do things you needed capital.”

For Phillips and those he worked with, the shortcomings of the “first-world” capitalist economies of corporate America and the “second-world” communist economies of (at the time) the U.S.S.R. created a need for alternative “third-world” community-based economies that were more equitable, just, and environmentally sustainable. Disparity of wealth and the inaccessibility of capital was a major concern for Phillips then, and continues to be one as gaps between the wealthy and the poor have only widened in recent decades. Just as he continues to create alternative economies, he also seeks alternative political conversations: “Whether you’re right or left or in the middle or anywhere, we’re saying there’s a place where people can come together around something that is of benefit to everyone.”

Initially CEI focused on adding value to the natural resource sector by investing (for example) in facilities to process more fish in-state, or to create new markets that would make it economically viable for local farmers to grow and sell their goods in-state. CEI’s expanded role in access to capital now reaches into different but connected sectors, such as renewable energy, sustainable forestry, affordable housing, eco-tourism, and real estate development, to increase deal flow in every direction. They put special programs into place to support women and new Mainers in business, and to invest in affordable healthcare, child care, and residential facilities that serve troubled youth and populations at risk.

The range and scope of CEI’s influence is incredible—from offering microloans of just a few thousand dollars, to multimillion commercial enterprises, to providing business counseling to startup entrepreneurs, to investing in projects like the anaerobic digestion power plant in Brunswick, in which bacteria converts bio-waste into bio-gas with the capability to power turbines to create electricity. Anyone who lives in Maine is familiar with hundreds of businesses that CEI has directly impacted. To name a few: Maine Community Health Options, which provides healthcare for about 60,000 Mainers; Gelato Fiasco, which is turning up in grocery stores around the country; the Blue Ox Malthouse in Lisbon Falls, which will be the first provider of Maine-made malt for the state’s growing microbrewery industry; and Sarah’s Cafe in Wiscasset, which is just down the street from Phillips’s office, and where Phillips and his colleagues regularly eat lunch. In the fall of this year, CEI will consolidate its Portland and Wiscasset offices into newly built headquarters in downtown Brunswick that will have a zero carbon footprint.

What started out as a conversation about Ron Phillips’s life turned into a conversation about Maine businesses, and about the nitty-gritty work of actualizing justice through economic means. I suppose it was inevitable: these people and these causes have occupied Phillips for 38 years. It’s a little bit as if he came home from the meeting in Boothbay Harbor, got to work, and has hardly lifted his head up since. With his colleagues at CEI, funding partners, and Maine’s socially motivated entrepreneurs and networks, he’s tirelessly solved problem after problem. He’s grown CEI to meet complex needs and has received national recognition while doing it. Ron Phillips is at once a practitioner and a visionary, and he will be missed when he steps down from his role as president and CEO next summer. When I ask Phillips what he’s looking forward to next, he says, “I’m looking forward to going home,” by which he means to his house in Waldoboro, to his wife of 50 years. After that, we’ll see. New building aside, Coastal Enterprises, Inc., isn’t going anywhere.