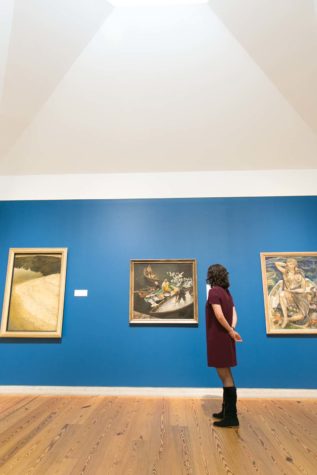 Diana Greenwold looking at a few of her favorite paintings at the Portland Museum of Art. 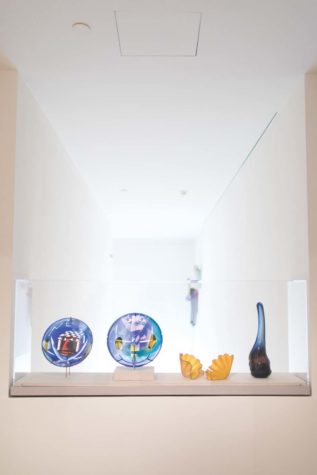 Some of Greenwold’s favorite glass pieces are displayed in a case on the second floor of the PMA’s Payson Building: two etched, sandblasted bowls by German artist Ann Wolff; Radiant Persian Pair by Dale Chihuly; Untitled by Marvin Lipofsky. 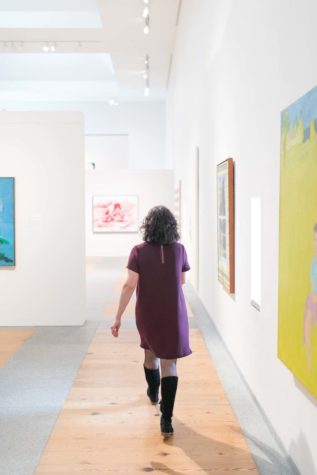 Greenwold gives a visitor a tour of her favorite works in the Payson Building, including Adventures of Huckleberry Finn—Asleep on the Raft (after Mark Twain) by Tim Rollins and K.O.S., on the far wall. 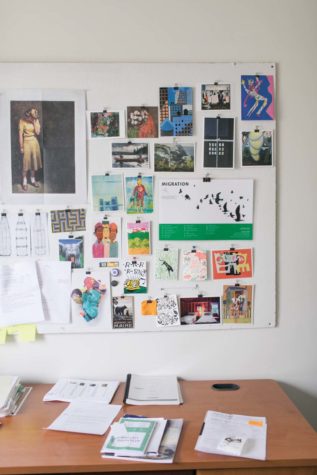 The bulletin board in Greenwold’s office offers colorful inspiration.

Art made in the United States is in the care of associate curator Diana Greenwold.

Elementary-school kids typically dream about being doctors or firefighters or pro athletes, but Diana Greenwold knew before she reached middle school that she wanted to be a museum curator. Like many children who grew up in Washington, D.C., Greenwold and her two siblings spent a lot of time in museums, most of which are free of charge. “There’s something about being able to pop into a Smithsonian museum whenever you feel like it that I think my parents identified early on as a really exciting opportunity for all of us,” she says. Greenwold had a childhood friend whose father, the director of special exhibitions at the National Gallery of Art, took them for a behind-the-scenes tour of an exhibit featuring objects from the Olmec, an early civilization in what is now Mexico, famous for its giant carved stone heads. “I remember him talking about the back and forth of how these enormous stone sculptures got from Mexico to Washington, and thinking, ‘This is a thing you can do? I want to do this.’”

As associate curator of American art at the Portland Museum of Art (PMA), Greenwold now spends a fair amount of time determining where pieces of art should go and how they get there. At Yale, where she studied art history, she became involved with the Yale Center for British Art as a tour guide. “That really cemented my interest in following this as a career,” she says. After graduation, she interned at the Smithsonian before moving to New York City and joining a prestigious museum exhibition design firm. Graduate school took her to Berkeley; she worked on her PhD there for four years, then returned to the East Coast on fellowships in New York and Boston to write her dissertation. Greenwold was a fellow at the Metropolitan Museum of Art and had just finished writing when she saw a posting for the PMA. After several years of experience at larger museums, she appreciates that the smaller scale of the PMA means she gets to have her hands in a variety of projects. “I really fell in love with the institution, so I have been here ever since,” she says.

Greenwold joined the PMA staff as a curatorial fellow in December 2014, when the museum was two years into its five-year “Your Museum, Reimagined” project. “There had certainly been a good deal of planning that happened before I got here, but the three of us who are the curatorial team—Andrew Eschelbacher, Jessica May, and I—had a lot of fascinating conversations about, ‘What are the stories we’re telling here? How are we going to tell them? What are the objects that we have at our disposal to do that?’” Greenwold says. “I came specifically with the mandate to integrate decorative arts more holistically into the collection, but also taking more leadership over the American art program and figuring out where the intersections were between the two.”

About 6,000 of the 18,000 items in the PMA’s permanent collection are considered decorative art—ceramics, glass, silver, textiles, and furniture— pieces that are both finely crafted and functional. “Like many similar institutions, the PMA was founded in the late nineteenth century largely through charitable donations from well-to- do families in the region,” Greenwold says. These bequests include a significant number of glass pieces designed for household use, such as pitchers, bowls, and vases, made in Portland, once a major center of glass production. “From 1863 to 1873 the Portland Glass Company made five million objects in pressed glass,” she says. In galleries focusing on the PMA’s collection, decorative objects now share space with fine arts pieces—a transferware pitcher patterned with signal flags flown from the Portland Observatory and an elaborate inlaid wood sideboard are displayed on the same floor as a painting by John Singer Sargent and a fantastical sculpture by Portland artist Lauren Fensterstock. The integration reflects a prime tenet of the reimagining project: installing art from the PMA’s collection in new ways. “That was a big thing that I jumped right into when I got here—working from the ground up on the permanent collection galleries,” says Greenwold.

Writing is also a significant aspect of Greenwold’s work. One of her first projects was to co-author the PMA’s first-ever catalogue of its collection; she also wrote the catalogue essay for the recent Hans Hofmann: Works on Paper exhibit, for which she was the in-house curator. Interviewing living artists like Duncan Hewitt, a sculptor from Hollis, for the 2016 exhibit Duncan Hewitt: Turning Strange was a new experience for Greenwold. “I was sort of a dead person researcher before this,” she says, adding that she was concerned about interpreting his pieces differently than he intended. “Duncan initiated me into the world of living artists and showed me that they can be delightful, and not that scary.”

Greenwold is working on several new exhibitions, including one opening on September 10 called Model Citizens: Art and Identity in the United States, 1770-1830. It uses work from the PMA’s permanent collection to “look at colonial and early federal questions about identity and self-expression,” she explains. The exhibition will include traditional painted portraits as well as needlework samplers and paper silhouettes. “It’s both about that very formal notion of refined portraiture, but also about how groups that we don’t often hear about—young girls, women—chose to represent themselves at that moment in time,” Greenwold says. “We’re going to bring out some of our samplers, which I think are really gems in our decorative arts collection.”

An exhibit focusing on the founding years of the Haystack Mountain School of Crafts—1950 to 1969—is in the works for 2019. This will be her first large-scale exhibition, and will feature about 80 objects, “everything from glass to ceramics to fiber to metalwork,” including work by celebrated glass artist Dale Chihuly. Greenwold is cocurating the exhibit with independent curator Rachel Arauz, and says that new Haystack director Paul Sacaridiz has been a helpful resource. A large part of her current work on the project is tracking down the pieces that will be featured. “I’m in the midst of this kind of stressful but quite fun job of figuring out where all the objects that we want to go in the show are—in public institutions or with private lenders—and going through the process of asking very nicely if we can have them for a while,” she says.

The PMA has a significant collection of works by the celebrated artist Winslow Homer, and the museum also owns the artist’s former studio at Prouts Neck, which opened to the public in 2012. “Homer is obviously a big part of my job as the American art person here,” she says. “I go there a lot, and every time it feels different and kind of magical.” The trips to Prouts Neck are an example of the variety and depth of work Greenwold loves in an environment she has embraced. “I think I’ve gotten a ton of opportunities here to really make an imprint in a way that I feel really, really excited about, and so pleased that the PMA lets me do.” 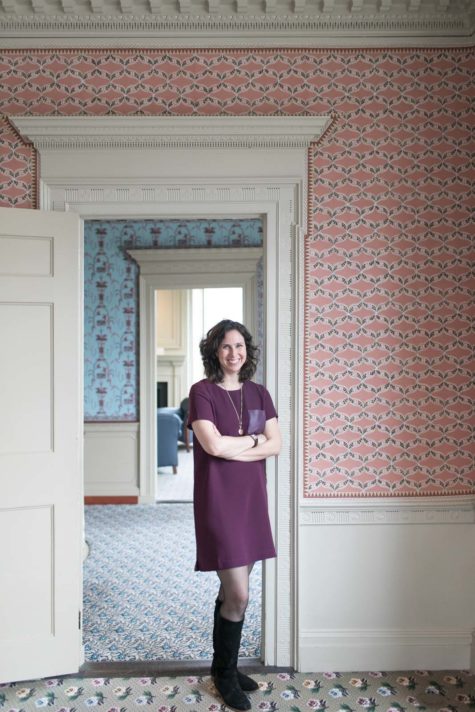 Associate curator of American art Diana Greenwold in the Dr. Alfred Osher Reading Room at the Portland Museum of Art. 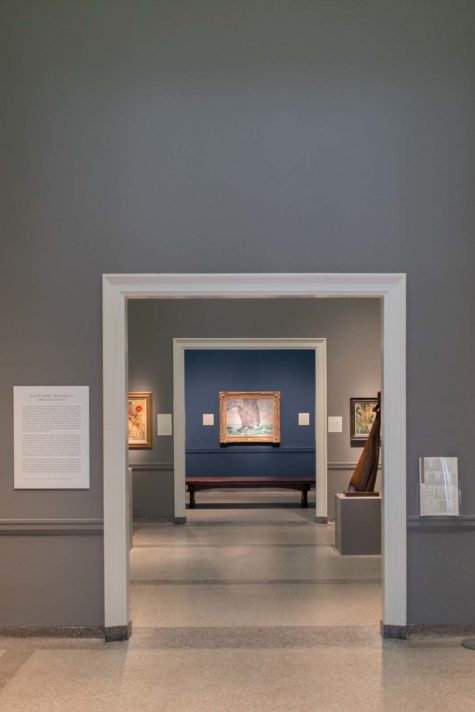