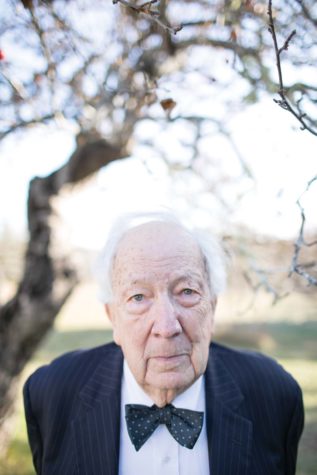 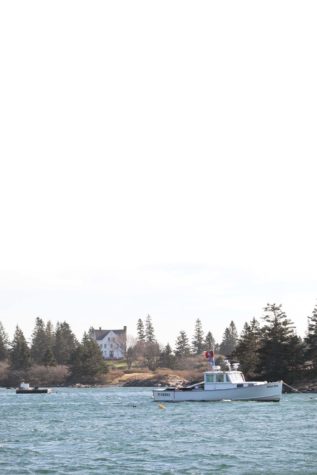 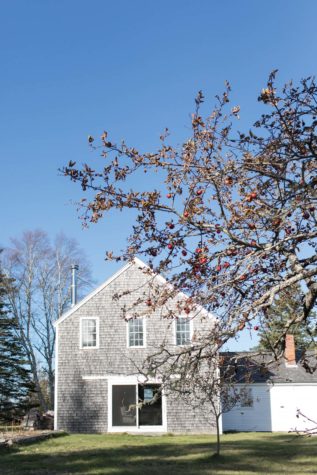 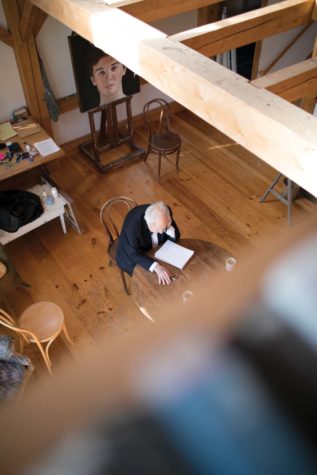 In front a portrait he painted, Wulp reads through one of his plays that he recently uncovered in his attic. 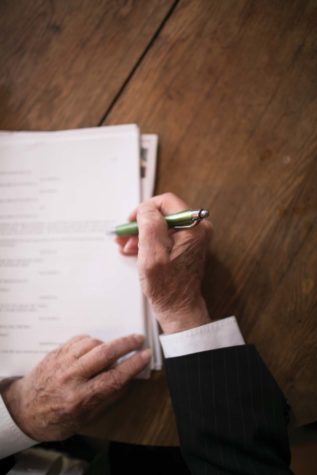 The Reinventions of John Wulp

I first met the protean artist John Wulp two decades ago, after he had begun directing student plays on North Haven Island. Wulp drew astonishing performances out of his young cast members, which misted the eyes of hardened lobstermen and boatbuilders who watched their children perform at seemingly impossible levels of intensity. I wondered how such an accomplished Broadway playwright and director had washed ashore on a remote Maine island. Little did I know that Wulp, who had been metaphorically shipwrecked on nearby Vinalhaven Island and then proceeded to become the toast of both communities, would need to weather many more triumphs and disasters during the following decades.

Wulp first landed on Vinalhaven a half- dozen years after winning a Tony award in 1978 for his stunning Broadway production of Dracula. The production featured, among others, Edward Gorey, who designed the sets and costumes and also won a Tony for his work on the show. “Dracula was an enormous success,” Wulp recalls, “and I thought everything I did would make fabulous amounts of money. But over the next four years everything I did lost fabulous amounts of money.” A few years after Dracula’s successful three-year run on Broadway, Wulp and a friend mounted a sailing expedition to visit Great Spruce Head Island in northern Penobscot Bay, where Fairfield Porter, an artist Wulp admired, painted many of his dreamy, bucolic landscapes. The pair did not get to Great Spruce Head but dropped anchor in Pulpit Harbor on North Haven, where Wulp immediately said to himself, “Oh my god, I am going to live here.”

While staying at the Pulpit Harbor Inn, run by Barney and Christie Hallowell, both teachers at the island school, Wulp made a reservation to return to North Haven to find a house to buy. With an island real estate agent, Wulp scoured North Haven’s properties, but he could not find what he was looking for. On the next-to-last day before he was to return to New York, the real estate agent arranged for Wulp to look at houses on Vinalhaven. There he saw an abandoned, weathered Cape on Poor Farm Road, on a lonely, isolated part of the neighboring island. “It was exactly the house I had in my head,” Wulp says. He closed on the property in the spring of 1985. With no plumbing or wiring and with plaster crumbling around him, Wulp spent the next six summers slowly and meticulously restoring the farmhouse and the “beautiful old ruined orchard” in the adjacent meadow.

By 1992 Wulp had completed the repairs on his house and, by his own admission, had worn out his welcome in New York. He decided to move to Vinalhaven year-round. “I had no money,” Wulp says, “so to support myself I worked at the lobster plant packing frozen lobsters at night and worked as a breakfast cook at a local restaurant.” Then he adds, almost as an aside, “That’s when I seriously started to paint again.”

In the past, whenever Wulp’s theater career had stalled or his productions had ended in disaster, he would turn his restless creative energy to a completely different artistic medium. Wulp took up photography in the early 1960s and began organizing photo shoots with various artistic troupes, including the Merce Cunningham Dance Company, the Paper Bag Players, and the Living Theatre. In addition, when he was not consumed by the theater world, Wulp began painting watercolors and later moved to acrylics. Wulp painted stunningly quiet landscapes and virtuosic portraits, which he had no trouble selling, and he briefly considered becoming a professional portrait painter. But he demurred, he tells me, “because I wanted to make paintings that were more deeply felt and personal.”

While struggling to make ends meet and make a new life for himself on Vinalhaven, Wulp painted a series of an apple tree on the island as it bloomed, fruited, and fell quiet, which he named Four Seasons. Several of these are now in the collection of the Farnsworth Art Museum in Rockland. In 1994 Wulp ran into Barney Hallowell again, who had since become the principal at the North Haven Community School. The two quickly hatched a plan for Wulp to help start a theater program at the school. “It was like a life support,” says Wulp. “I wanted to work with kids to see what we could make with the materials of their lives.” The kids in the lower grades were immediately interested, and they made up a play they titled The Enchanted Ferry Boat, which islanders loved. “Then the kids in the upper grades got interested,” recalls Wulp.

With older students in mind, Wulp proposed to mount an ambitious production of Oscar Wilde’s The Importance of Being Earnest with four high school student leads—an exceptionally challenging play to pull off because the puns in the dialogue require split-second timing—and the students turned in brilliant performances. With this success as a springboard, Wulp mounted new productions year after year, including Thornton Wilder plays, William Shakespeare’s A Midsummer Night’s Dream and The Tempest, a charming adaptation of The Wind in the Willows, Gilbert and Sullivan’s H.M.S. Pinafore, and a play Wulp had first encountered in the 1960s called Red Eye of Love, which Wulp describes as “a crazy, cockeyed history of America I thought was hilariously funny.”

The show that earned Wulp his widest audiences in Maine, however, was his production of Islands in 2001. It was based on life on North Haven, population 350. Wulp recruited Cindy Bullens (now Cidny Bullens), a Grammy-nominated musician who had lived part-time on North Haven and had tragically lost an 11-year-old daughter to cancer in 1996, to help write the songs. Wulp’s idea was to talk with groups of kids and then make a musical out of those talks. He recalls one teenager complaining about island life, comparing it to having “six mothers and 350 babysitters.” He and Bullens looked at each other and knew they had a title for a song, which they fleshed out with music and lyrics to become an integral part of the show.

The initial production of Islands was delayed for a year after Wulp had a heart attack and underwent quintuple bypass surgery. A year later, after a sold-out local run on North Haven, Wulp, through his large network of theater contacts, arranged to bring this wildly successful musical for a reprise on Broadway. The ambitious effort was nearly derailed again, this time by the terrorist attack on the World Trade Center, when the parents of some cast members decided it was too risky to allow their children to participate. Wulp and the islanders, however, decided the show must go on, minus only a few of the youngest of a cast of 50-plus local residents. After the success of Islands, the community rallied around Wulp’s original dream of acquiring and renovating a large rambling building that had been a store and post office at the head of the ferry landing for a theater and community center.

After Waterman’s Community Center opened, Wulp spent the next three years producing great community theater. But in 2005 the North Haven School and Waterman’s Center parted company with Wulp. “We were all worn out,” Wulp says, and adds, “The material was difficult, what I was asking them to do was difficult.” The locally popular shows were expensive to mount, and although Wulp says he raised most of the money himself, the financial risks upset some board members of the Waterman’s Center.

Shipwrecked yet again and nearing his 80th birthday, Wulp was adrift. “I worked for 12 years and had nothing to show for it,” he says. Wulp sold his beloved house to a summer couple, subject to a life tenancy in the attached barn, and began painting again to support himself. He also suffered several minor strokes, which further isolated him and strained the frail bonds of community support that had often sustained him.

Then something almost miraculous happened. In 2015 the Walker Art Center in Minneapolis was in the midst of planning an exhibition on modern dance and learned that Wulp had photographed Merce Cunningham’s renowned dance troupe. After a curator visited Vinalhaven to see Wulp’s photography, her visit attracted the attention of the New York Public Library for the Performing Arts, which purchased Wulp’s entire collection. But the real gift of that day appeared while Wulp was sifting through boxes in his attic to find the 40-year-old Cunningham negatives. He came across a file of four plays he had written when he was getting his start in the theater. One of them, The Saintliness of Margery Kempe, was a comedy he had written in the early 1950s while he was in the Marine Corps. The trip to the attic seemed to inspire another manic burst of creativity from Wulp, who turned his attention to writing poetry. Beginning in the spring of 2016 and for the next four months Wulp composed over 200 poems, which he read at Vinalhaven’s theater and then published in 2017 in beautiful book form, titled Cormorant Time.

Wulp also sent his recently discovered original plays out to theater directors in New York, attracting the attention of one of Broadway’s leading directors, Austin Pendleton, who hopes to stage Wulp’s play The Saintliness of Margery Kempe this year, around the time Wulp turns 90. And if that were not enough, there is interest in mounting a musical version of Red Eye of Love in London, a play that had a long run off Broadway in 1961 and that Wulp subsequently rewrote with Arnold Weinstein, the play’s original author.

“I always wanted a chance to relive my life and do it better,” Wulp says, “and here I am doing it.” Then, the ever-imperious theater director adds, “You do it over and over again until you get it right.” 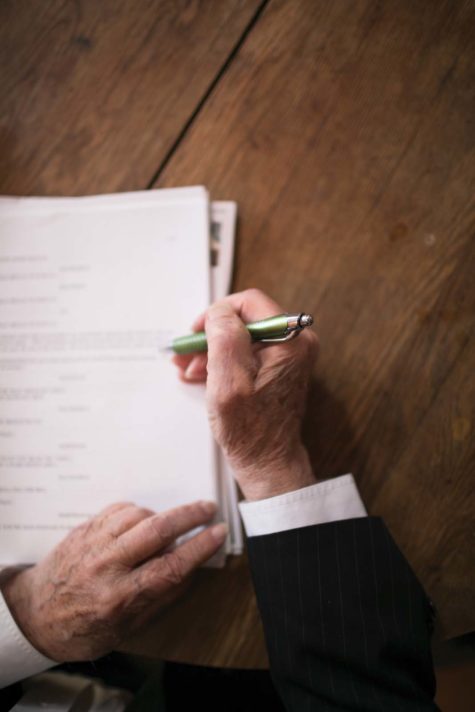 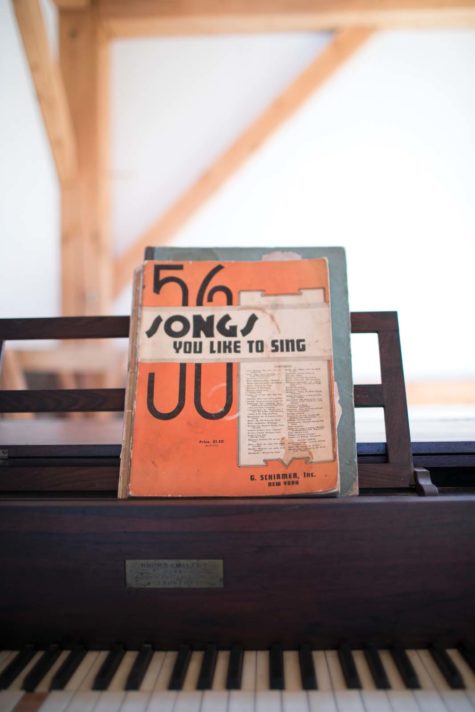 The piano in Wulp’s studio has helped him write lyrics for several of his musicals. 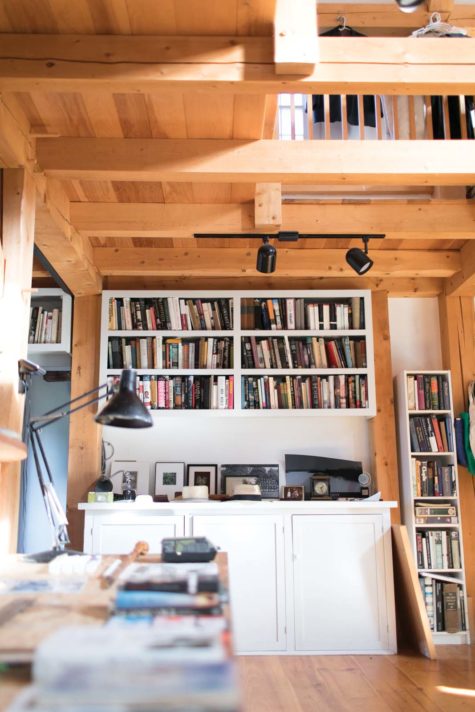 Wulp’s library spills out of its bookcases. 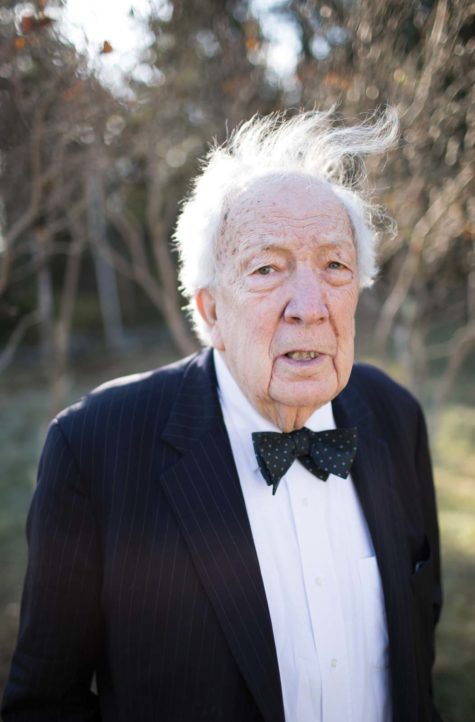 Wulp, a playwright, director, painter, photographer, and poet, is a man for all seasons.