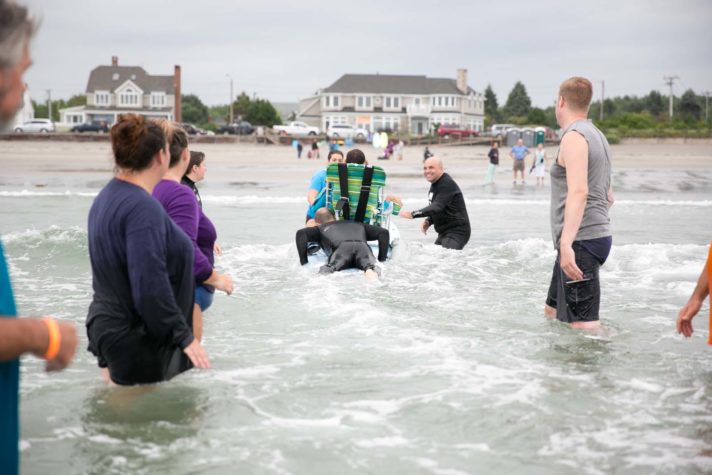 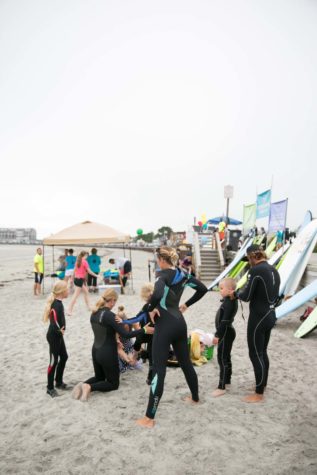 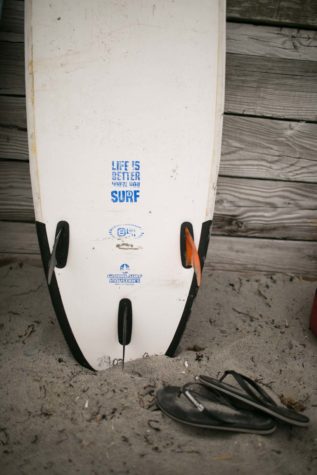 Special Surfers often relies on donated equipment for the program. 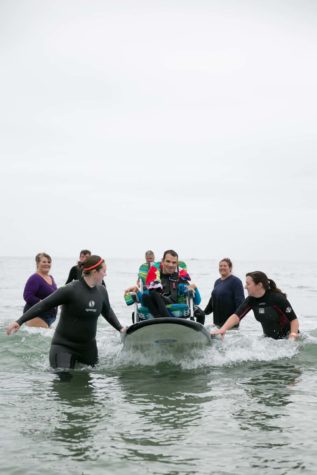 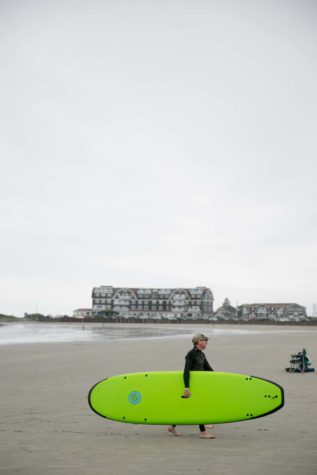 Stand-up paddle boards are the most versatile boards in the program. Many SUPs are donated, including several by Eric and Kathleen Diana. They gave two boards to honor the memory of murder victims Wendy Boudreau of Saco and Josephine “Joey” Gay of Newtown, Connecticut. 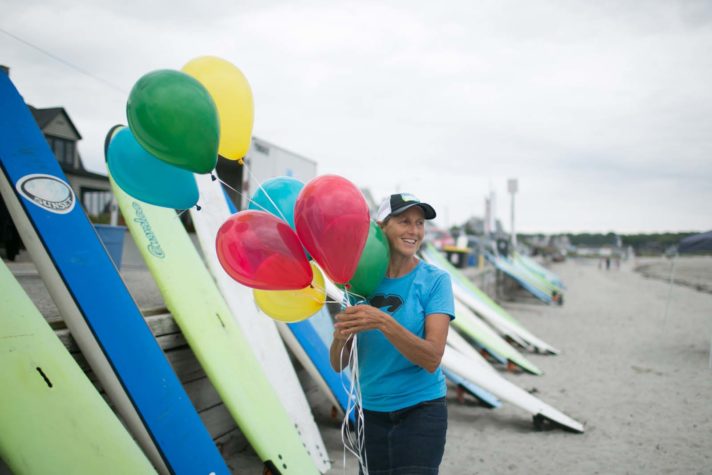 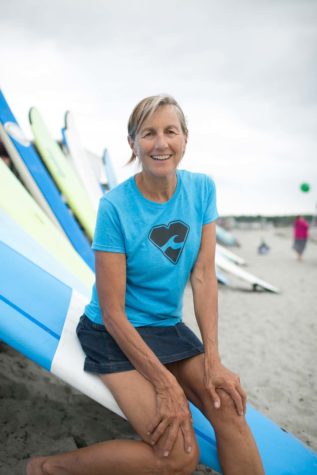 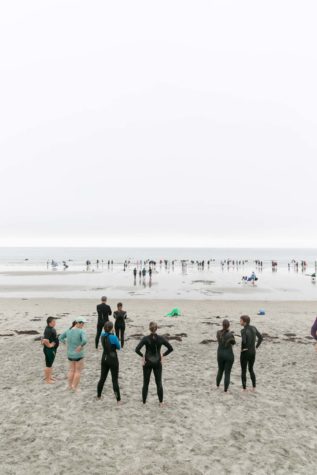 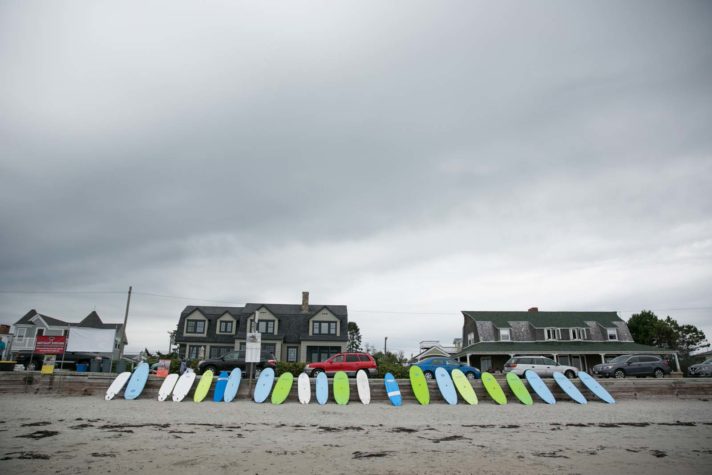 Catching waves and breaking down barriers in Kennebunk

We can feel the buzz of excitement before we see the surf. Despite the light drizzle, dozens of cars line Beach Avenue in Kennebunk. Volunteers in bright shirts mill about on the sidewalk, directing people to the pop-up tents and registration tables nearby. Down in the  gently rolling waves, rows of wetsuited athletes are already on their boards. Sleek and joyful as seals, they glide onto the crescent sliver of shore, guided by the hands of numerous volunteers. This is Special Surfers Night.

The surfers are indeed special: their efforts elicit delight from all who are watching. Spectators whoop and cheer with every successful ride. This event, held at Gooch’s Beach on the third Tuesday of the month in June, July, and August, began in 2003. “We took three kids out the first year, and the next year we started expanding the program right away,” says Nanci Boutet, executive director of Special Surfers. The event can have as many as 95 participants and 230 volunteers on a given night. “We have a waiting list almost as soon as signup begins,” she says.

Born in Manchester, New Hampshire, Boutet moved briefly to California as a teenager before landing in Maine, where she met her husband at the age of 17. Her love of wave riding came later in life. “Our son wanted a surfboard for his middle school graduation, and when he got into it, we got into it,” says Boutet, who founded Aquaholics Surf Shop in a renovated Kennebunk Lower Village church in 2002.

Special Surfers Night began as a suggestion from special education teacher Maureen Dow, who had been working with kids on the autism spectrum. “Surfing for special needs kids was kind of a new concept at the time,” says Boutet. “It’s great for these kids because it really does get them in a place where they feel comfortable.”

Boutet, who sold Aquaholics in 2015, is a bit of a whirling dervish. Racing across the beach from one volunteer group to the next, she calls out instructions at lightning speed, doling out hugs as she goes along. Between embraces, she tells the story behind the brightly painted surfboard that is leaning against a rock wall. Volunteers Eric and Kathleen Diana donated it in honor of seven-year-old Josephine “Joey” Gay, a first grader with autism who died in  the shooting at Sandy Hook Elementary school in Newtown, Connecticut, in 2012. Their children were friends with Joey. “Despite that tragedy, they wanted her to be remembered in a happy way,” says Boutet. Donated equipment is vital to the program, which provides participants with boards and wetsuits. “When we owned Aquaholics, we used to use every bit of equipment we had,” says Boutet. “We have never charged for this program. We beg, borrow, and steal surfboards from anywhere we can get them.”

Special Surfers has expanded beyond children on the autism spectrum. It welcomes individuals of all ages, with conditions as diverse as Down syndrome and cerebral palsy. “A lot of the kids have multiple diagnoses, and some of the kids, you would never know that they had any kind of diagnosis unless you spent a few minutes with them,” says Boutet. Families drive from as far away as Vermont and Toronto, Ontario, to take part. “Our kids look forward to this,” says Boutet. “If we get thunder and lightning, that’s the only thing that holds us back. We do it in rain, drizzle. Nobody even notices. You’re already getting
wet.”

Why do the Special Surfers find this pastime so appealing? “It demands their attention on every level,” says Boutet. “There’s the movement of the water, the movement of the board, their focus on being balanced, everything moving so fast…I think that is kind of a relief for them: to be tunnel-vision, paying attention, enjoying and watching things happening all around them.”

On the northern part of Gooch’s, a smaller group of athletes has gathered for the Special Ops program. These individuals are unable to stand upright due to conditions like muscular dystrophy and other muscular and nervous system issues. Although most use wheelchairs and are familiar with being in a seated position, this experience is different. Wearing wetsuits, they are strapped into lightweight chairs attached to paddleboards. Each Special Ops participant is assisted by at least six volunteers, instead of the traditional two or three. Like a receiving line at a wedding, the board is sent from one set of hands to the next, in what is known as “the gauntlet.”

Brian Binette is a Special Ops athlete. Born with cerebral palsy, he navigates the non water world with the help of a motorized wheelchair, and communicates using a computerized device. As his board traverses the gauntlet and the raindrops slide down his cheeks, 42-year-old Binette breaks into a broad grin. “He wanted to come tonight—he looks forward to it,” says his mother, Pat, who worked as a nurse at Southern Maine Medical Center for 45 years. “And we like to watch him be happy.”

“He wrote a thank-you note to Nanci because he enjoys this so much,” says his father, Bernie. Brian, who attended the University of New England before transferring to the University of Southern Maine and completing his associate’s degree, uses an eye-tracking device that enables him to write by looking at letters. This is a painstaking process: getting his college degree took him six years. “Many things take him longer than other people,” says his father. Perhaps this is why the ease of cruising the waves brings Brian such satisfaction. “He keeps smiling all day,” says Bernie, a former 35-year educator and principal in the Biddeford school system. As the Special Ops volunteers turn Brian’s board to give him another ride, Bernie crosses the sand to greet his other son, Jason, and the grandkids, Hailey and Chase. They have driven up from Connecticut to take part.

Like the participants, the teaching and lifeguarding volunteers often come from great distances. Boutet estimates that there have been more than 2,000 volunteers (also known as “Heroes”) since the program began. “Once you do it, you’re pretty hooked,” says Boutet. One volunteer, Lara Raymond, who has been a member of the Australian Surf Life Saving community since she was ten years old, met Boutet while surfing in Peru. “It’s not just about the surfing,” says Raymond. “It’s about helping people do something they might not be able to do otherwise—and supporting Nanci in this huge effort.”

The rain slows, almost imperceptibly, and the frenzy of beach activity begins to ebb.  After a few hours of intense concentration, the special surfers are slowing down. A few have stripped off their wetsuits and returned their boards. A contented calm suffuses the dispersing crowd. Boutet anticipates that the Special Surfers program will continue for many years to come. “I think a lot of people come into it not knowing what to expect,” says Boutet. “When you connect one-on-one with these kids, you learn so much: you learn so much about yourself. You learn so much about the world.” 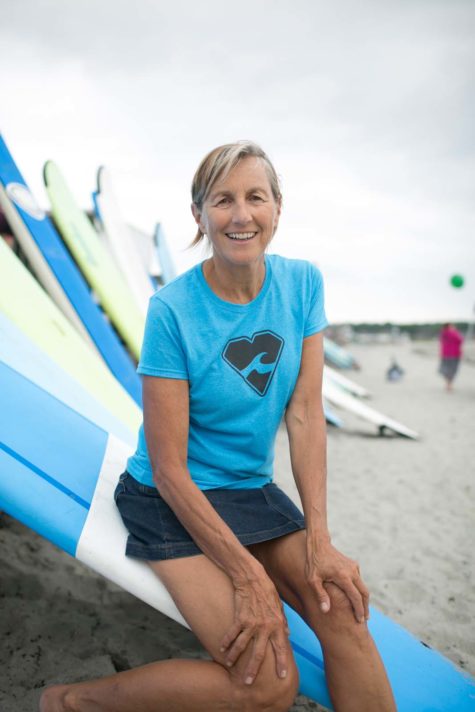 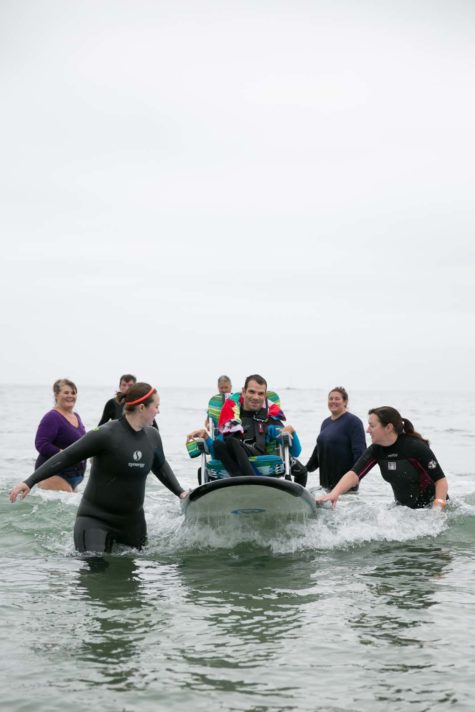 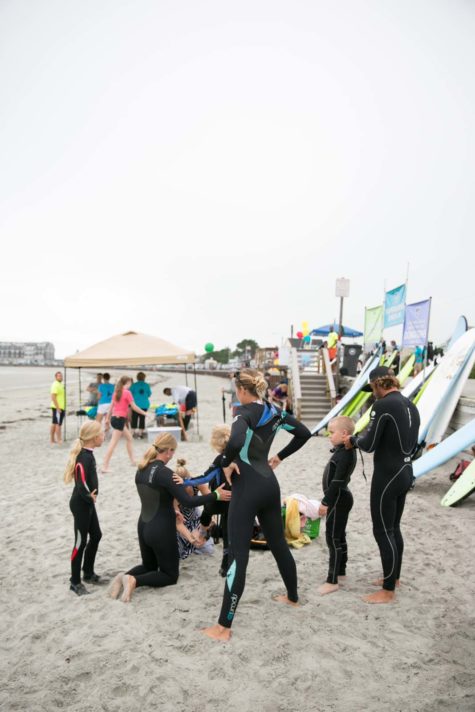