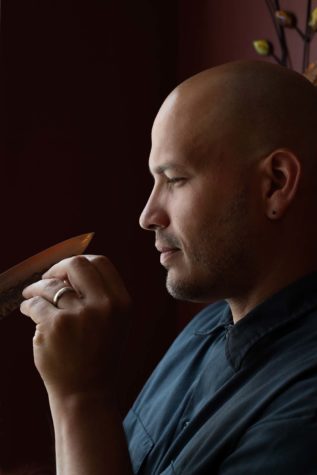 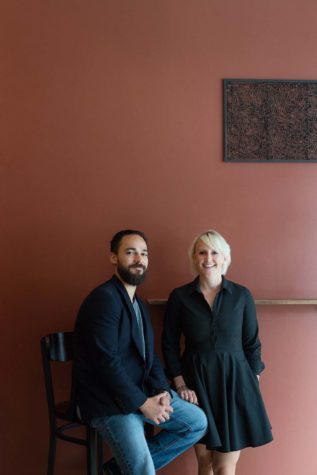 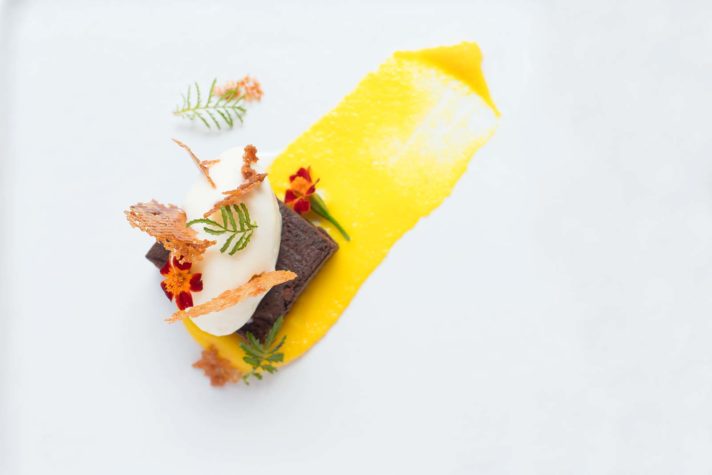 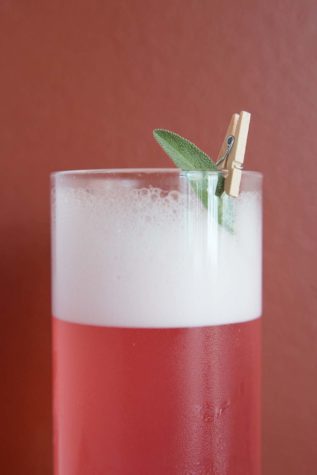 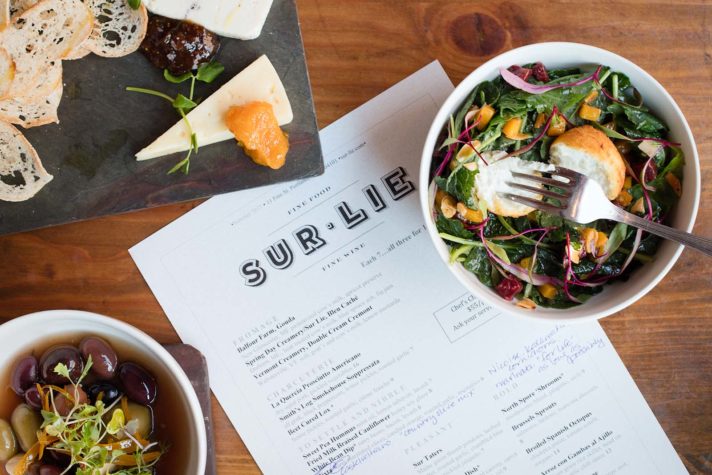 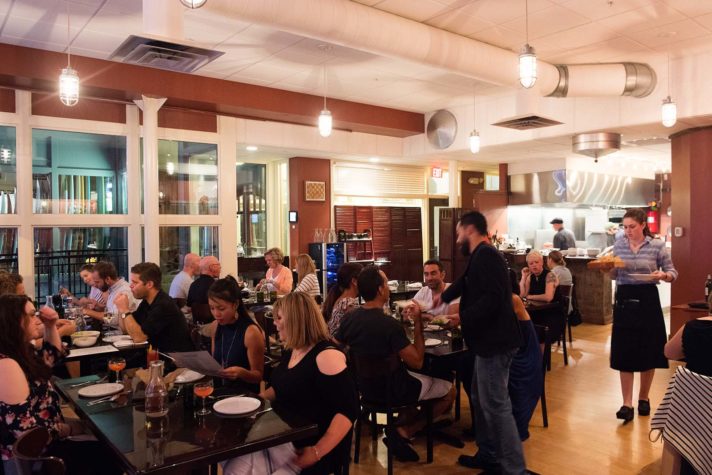 An unwavering commitment to outstanding food and the community

Emil Rivera, chef at Sur Lie, is a self-professed nerd. He needs to know the “why” of everything, from cycling to physics to food science. “I geek out on the science of how things work,” Rivera tells me. “I need to learn something new every day.” He urges his kitchen staff to think the same way. “Know your stuff,” is his advice to the cooks, using a slightly different “s” word. “Don’t just follow a recipe. Learn it, understand all the steps,” Rivera tells them. “The recipe is just a template.” I can almost see the gears turning in his mind as we talk. His inquisitive approach has led the chef to cook the way he does today—boldly, bravely, and with daring creativity.

Co-owner Krista Cole describes Sur Lie as American contemporary cuisine, a catchall that encompasses numerous influences, like America itself. The menu is tapas-style, but not Spanish. This is small-plate dining, designed for sharing, and if you think you don’t care for that style, I urge you to reconsider. The offerings at Sur Lie feel anything but small. Portions vary in size, but big flavors carry the day and sharing means you get to taste them all. Rivera draws from his previous influences and experience, combining them with top-notch, fresh Maine ingredients.

He calls himself a “Puerto Mainer,” referring to his childhood and his current home. He attended cooking school in Puerto Rico, but soon became bored with it, preferring to continue his education in restaurants. He worked under Austrian and French chefs on the island, learning the ways of classic technique in formal, fine-dining atmospheres. A stint in Washington, D.C., with James Beard award winner and internationally recognized chef José Andrés, provided another dimension and immeasurable inspiration. “Working there was an explosion of information. We had resources from around the world to teach us,” he says. “A lot of what I do here is riffing on what I learned at the Andrés group.” Sur Lie’s menu is organized not by traditional categories, but by taste and texture: Crisp, Pleasant, Bold. You might begin with something from the “To Settle and Nibble” category, the most apt description I’ve seen on a menu. Mixta, a bowl of warm, marinated olives topped with thin strips of candied orange peel, is a fine companion to a cocktail or glass of wine while you peruse the other offerings. I ask Rivera how long the olives marinate in the aromatics and flavorful oil, and he answers, “for life.” He is partial to hyperbole like this, but it works for him. When describing a dish, Rivera doesn’t omit a single detail, revealing the complex techniques that go into each one. Rivera explains the evolution of a perennial favorite called That Carrot Dish. “We’ve always had a peas and carrot dish on the menu. I just keep playing with it and now this is purest version of the dish,” he says. It begins with a duck egg from Whatley Farm in Topsham, fried sunny-side-up in a small iron skillet. The organic carrots are first salt-roasted and then broiled with butter before serving. Carrot “caramel” is made by reducing carrot coulis until it’s unctuous and faintly sweet. The peas appear simply as leafy sprouts on top. The final touch is a drizzle of blue spruce ash oil. “Knowing your stuff, learning the technique, you can always use it as a trampoline for making something else,” he says.

The blue spruce ash is a Rivera signature ingredient. When he moved to Maine, the inquisitive chef educated himself about his new home, digging into its natural history and traditions. He discovered the use of pine, an abundant resource, as an ingredient in cocktails as far back as the 1850s. It turns out his backyard in Brunswick is full of blue spruce, and in typical Rivera fashion, he asked himself, “Why not?” “Now it’s part of our language, a condiment since day one,” he says. “Whenever I burn the spruce, it smells like Christmas in here, no matter what time of year it is.” The ash even found its way into a cheese he helped develop with Spring Day Creamery in Durham. Bleu Cache is part of a cheese and charcuterie platter created with all Maine products, including Balfour Farms gouda, beet-cured lox, pickled fiddleheads, tiny radish seed pods, and crostini made with bread from Hootenanny bakery in Damariscotta. I wonder aloud how Rivera established relationships with so many producers, and of course, it all comes down to more research. Not long after his arrival in Maine, he discovered a list of farms, cheesemakers, and other resources on the menu of another restaurant. With that list in hand, he visited farmers’ markets, as well as the Common Ground Country Fair, seeking out the people whose food he had already tasted. “I introduced myself and said, ‘I want to carry your product,’” he tells me. “It was a lot of legwork. I was so persistent.” He succeeded in finding the highest quality ingredients the state offers and making friends in the process. He pulls out his phone to show me photos of his young daughter, Divi, playing at Stonecipher Farm with owner Ian Jerolmack’s kids. “The farmers are all friends now,” Rivera says. “When they come eat here, they see how I showcase their product, how I respect it.”

With the restaurant approaching its third anniversary, Cole and partner Antonio Alviar are proud of Rivera and how they’ve worked together, strengthening Sur Lie’s reputation for both innovative cuisine and a commitment to the community. She juggles a dual career in nursing and the restaurant business; caretaking is very much a part of who she is. They’ve made changes to the restaurant’s schedule, cutting out lunch and brunch, to allow for a better lifestyle for the staff. “We created a family feel right off the bat,” says Alviar. Recently, the couple hosted some of Portland’s finest chefs for an all-star dinner at Sur Lie benefiting Maine Children’s Cancer Program. “Charitable activities have always been part of our plan,” Cole says. “All three of us are absolutely on the same page about supporting the local community.” Participation in such annual fundraising events as Easterseals Maine’s Toast on the Coast and the Kennebunkport Festival is important to everyone at Sur Lie. Rivera has a lot of enthusiasm for the festival, and looks forward to it every year, cooking an Art of Dining dinner in a private home and participating in the Grand Tasting Party, with Divi by his side.

While Cole had little previous restaurant experience, Alviar describes her as “the backbone of this place.” She earned Maine Restaurant Association’s Rising Star award in 2016, recognizing newcomers to the industry and their early achievements. Alviar does have an extensive restaurant background, including valuable time spent with Michelle and Steve Corry at Five Fifty-Five. It was Steve Corry who suggested the couple should return to Maine from Colorado after living and working in Denver for several years. “We had talked about our own place, joked about it,” he says. “When we came back to Maine for visits, we could see that Portland was coming into its own.” They knew they wanted a place with an emphasis on wine and small plate dining, and the timing seemed right. “We were seeing restaurants like what we had in mind in other parts of the country,” Alviar continues. “We wanted to create a new platform, not attached to any one ethnicity. That idea has been beneficial to us.”

They posted an ad on Craigslist seeking a head chef for a tapas-style restaurant, and Rivera’s wife, Kathryn, urged him to answer it. When he cooked for Cole and Alviar at his in-laws’ home in Brunswick, “we clicked, like we’ve always been best friends,” says Cole. “We were trying to play it cool and calm, but we were so blown away by Emil. We loved his family. They’re as crazy as we are.” Or it may have been Rivera’s addictive brussels sprouts that sealed the deal. The dish has remained on the menu since the start, thanks to its popularity.

The atmosphere at Sur Lie is unpretentious, a reflection of the owners’ personality and the friendly staff. But service is highly professional, an important component in a place where the menu is untraditional and many ingredients may be unfamiliar to diners. A nonalcoholic aperitif arrives at the table as you’re seated, a few sips of something fizzy and seasonal, offering a small taste of what’s to come. Servers are knowledgeable and helpful, always ready to explain the menu or answer questions about wine. “We like wines from unique vineyards with cool stories or family history,” Alviar says. “Our goal is to showcase these wines without breaking the bank.” But there’s other criteria that informs his wine list: will it go well with Rivera’s food? “By default, we have an Old World palate,” he says, offering primarily Spanish and Italian wines that are a good match for the chef ’s work. Cocktails are also created with the menu in mind, changing with the seasons as often as Rivera does. Bar manager Bob Herczeg brainstorms behind the bar, conjuring up such original drinks such as the Horticulture Club Fizz, featuring Sweetgrass Winery and Distillery’s Cranberry Gin, or the Staring at the Sea, spiced with Coastal Root Garam Masala Bitters. The bar area is busy on a Saturday afternoon, a mix of couples and friends in search of a well-mixed drink, a well-chosen glass of wine, and a bite to eat.

“We all agree that Sur Lie needs to be a reflection of the community,” says Cole. “We have to have the vision to evolve and make
a constant effort to stay relevant.” Rivera concurs: “We’re all 100 percent committed to this restaurant. Everyone contributes to the Sur Lie story. We’ve made a million changes since we first opened. I keep pulling from my big trunk of ideas. If you want something different, you come to Sur Lie.”