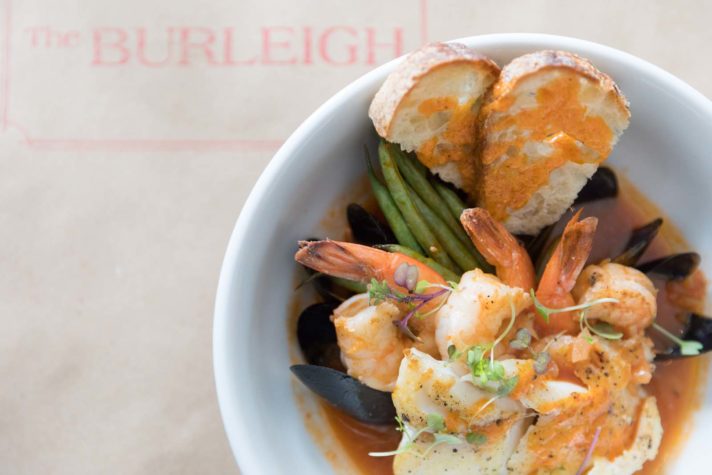 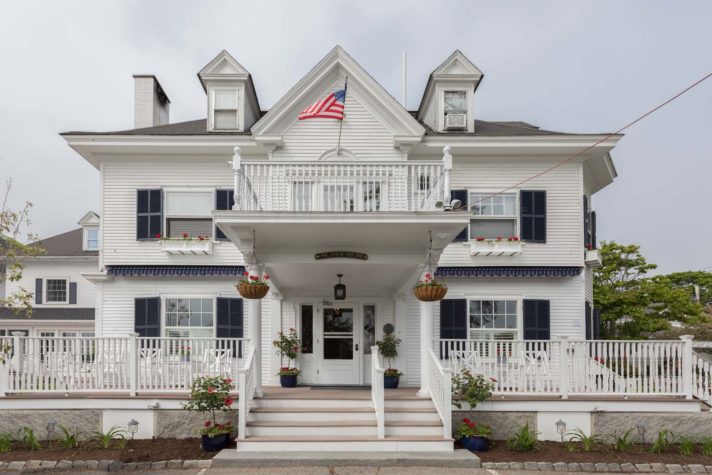 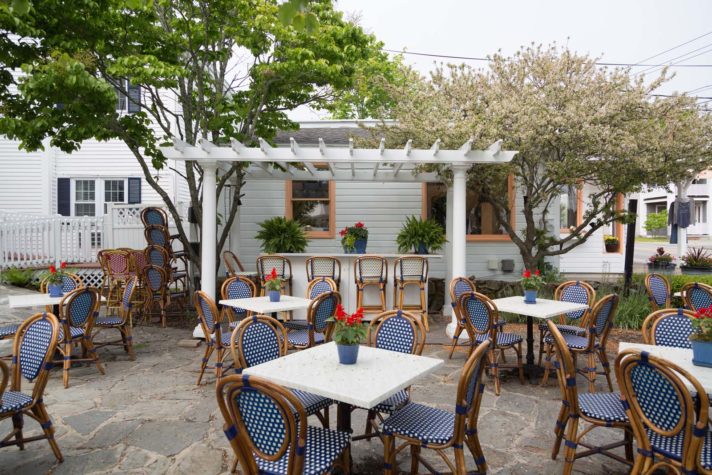 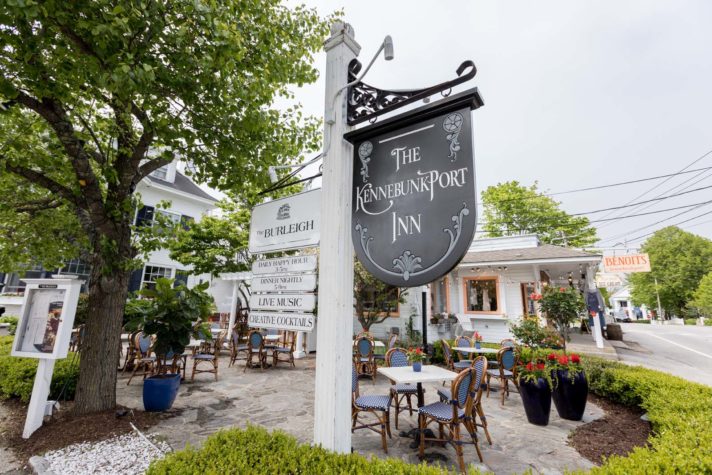 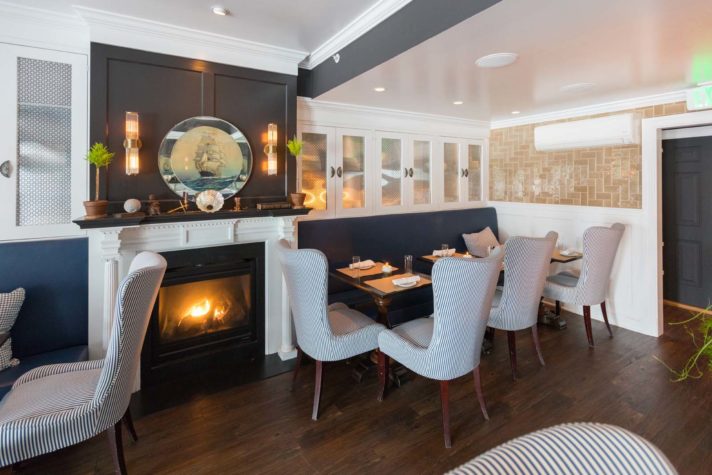 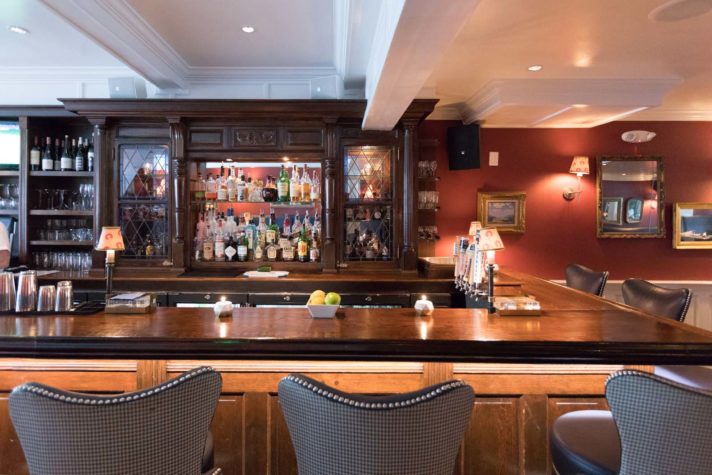 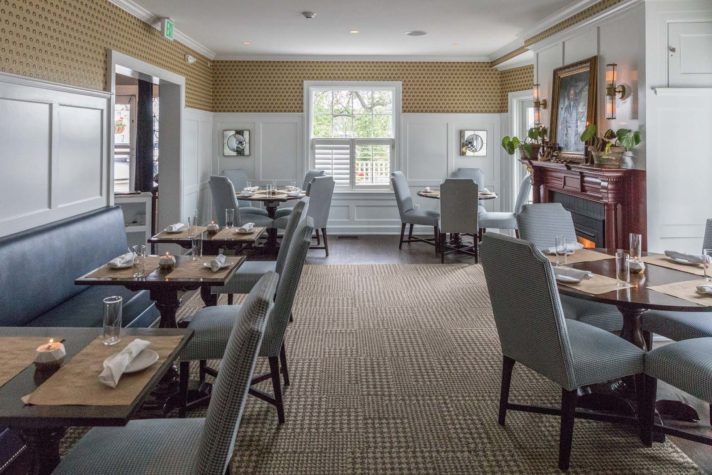 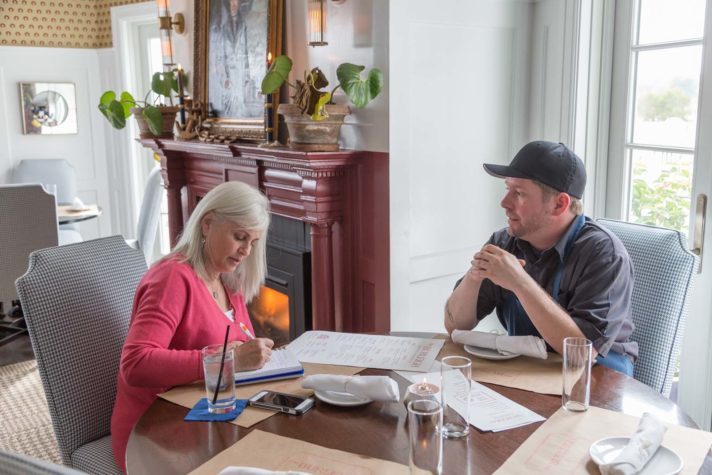 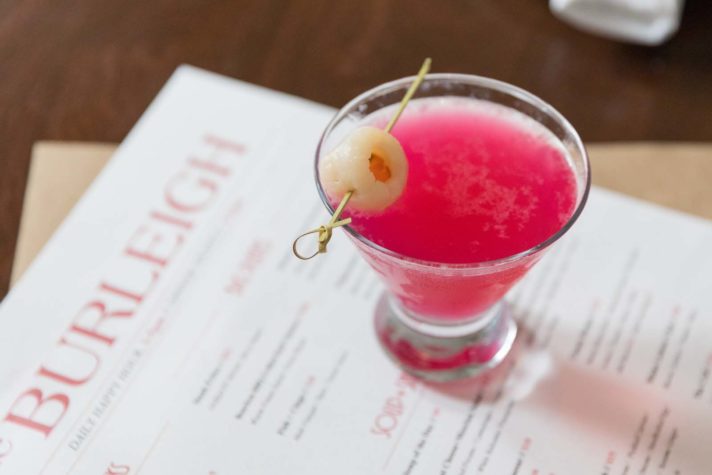 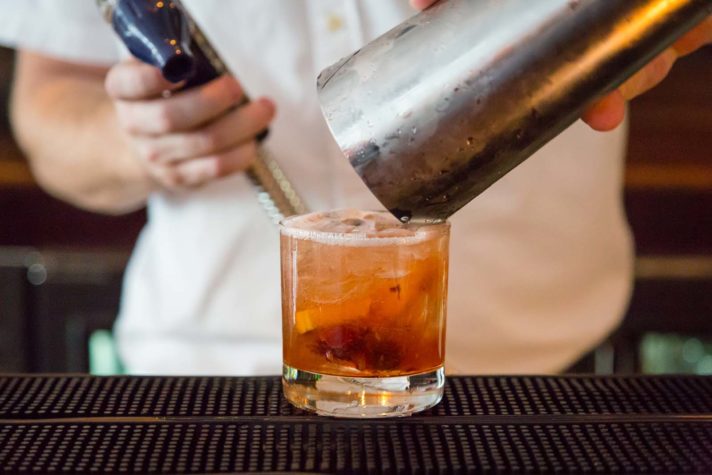 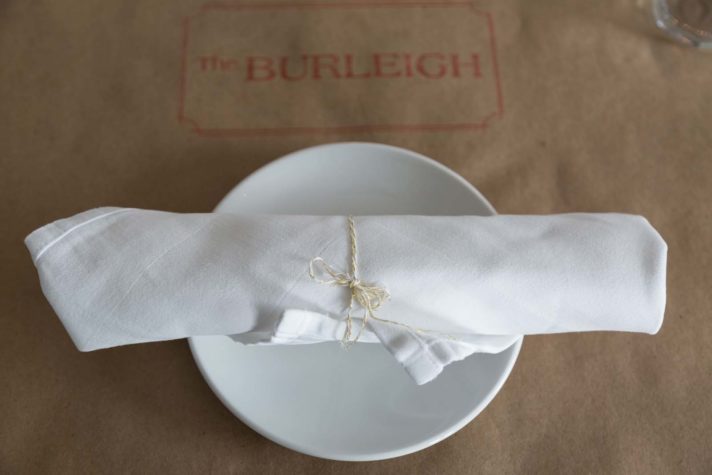 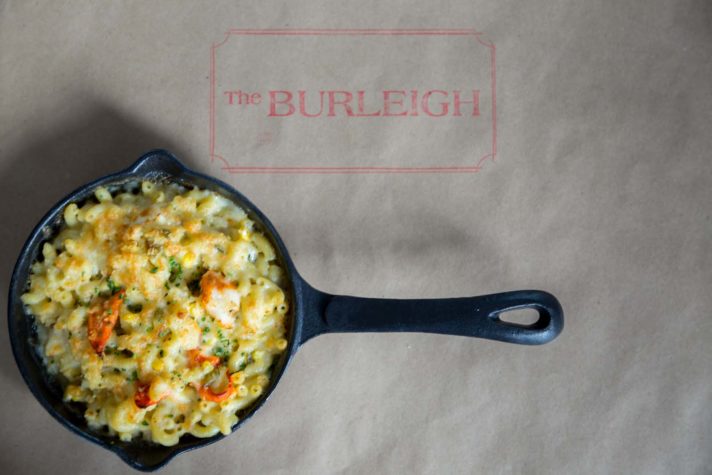 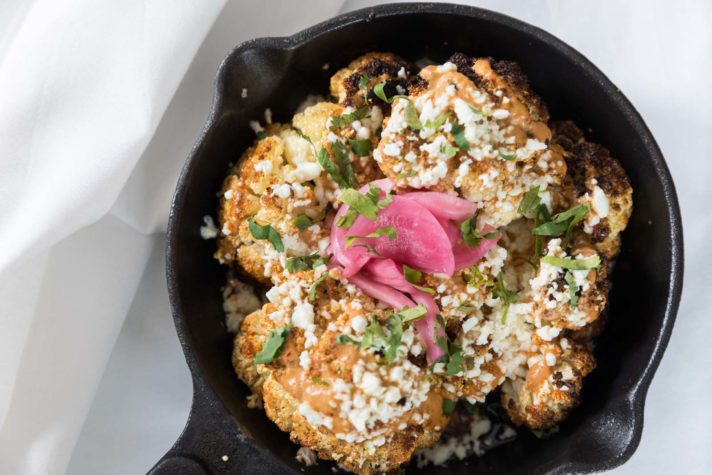 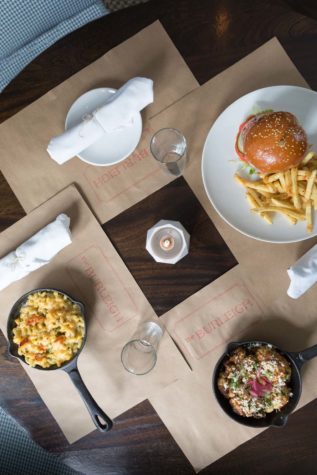 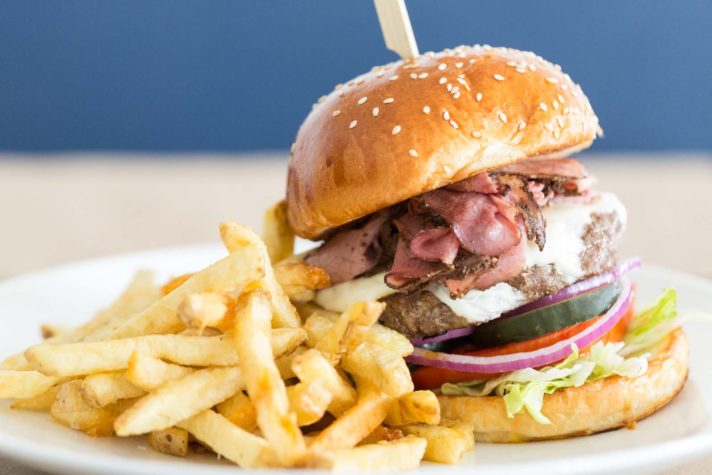 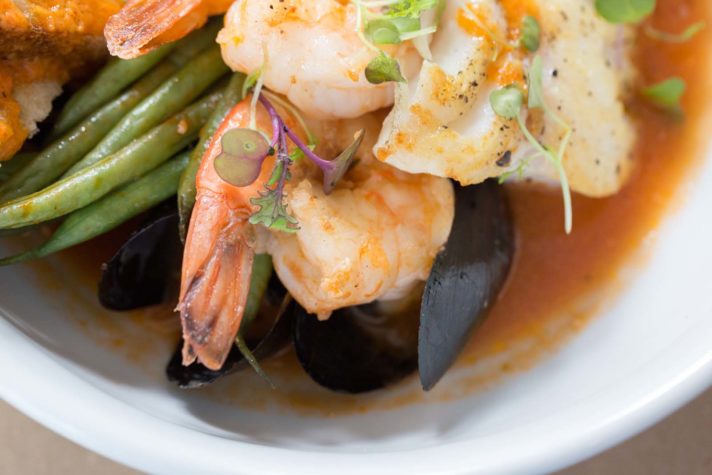 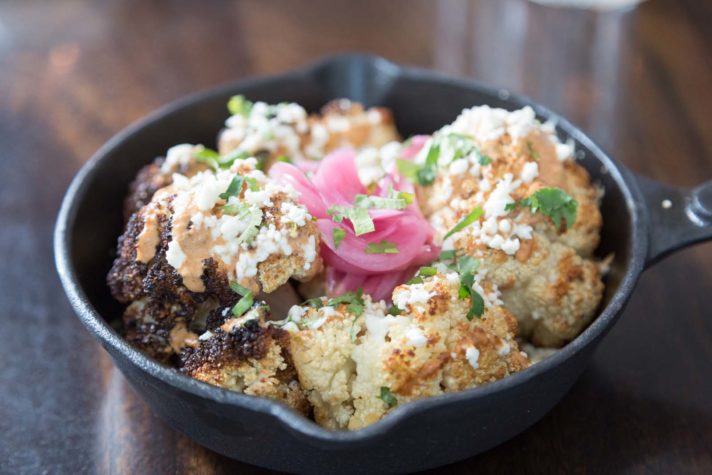 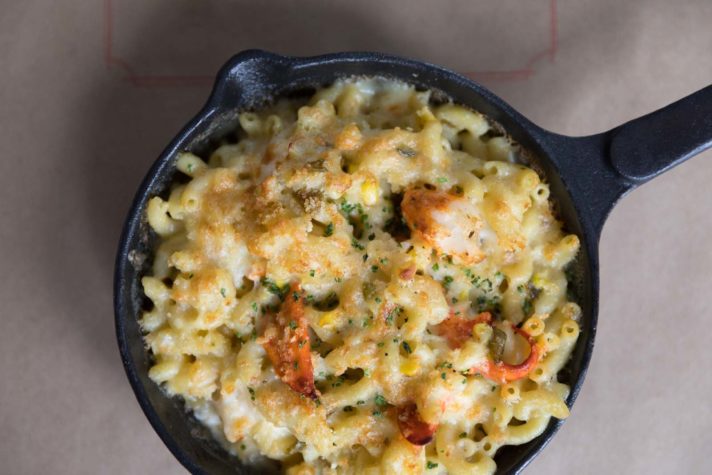 The Burleigh at the Kennebunkport Inn

In the late 1890s Burleigh S. Thompson built a Federal-style home on the Kennebunk River. One can easily imagine the pride this coffee and tea merchant felt in his grand home that boasted four open fireplaces, a library, and elegant, traditional details. The town has grown up around the property, and the beautiful home is now the Kennebunkport Inn, part of the Kennebunkport Resort Collection (KRC). The inn’s restaurant is now called the Burleigh, a nod to its historic past and original owner. The team accomplished the reboot in just four days, bringing in new menus for food and cocktails, as well as refreshing the decor. Louise Hurlbutt of Hurlbutt Designs originally designed this handsome space, but designer Krista Stokes of Favela Chic made some changes, updating the look. Pulling from Kennebunkport’s maritime history, deep red walls, stylish new wallpaper, and bright white paneling and trim all add up to a subtle, nautical-chic style and feel. There are three distinct areas: the parlor, the pub, and down a short breezeway, the restaurant. Each has a slightly different ambiance, but all are comfortable and welcoming with generous upholstered chairs. Even the bar stools are incredibly cushy. Outside, a big deck complete with a stone fireplace beckons on a sunny day.

“The Kennebunkport Inn is open year-round, and it needed a new food and beverage concept,” says Rachel Pelkey, marketing manager for KRC. A casual pub concept that was in place throughout the winter proved popular, so the evolution to the Burleigh came about naturally. “People loved it. The changeover happened organically,” Pelkey says. “So many people were involved, but we all had the same idea in mind. It was just a matter of making sure all the puzzle pieces fell into place.” Two big pieces of that puzzle are executive chef John Shaw and chef de cuisine Eric Murdough. Shaw, a Kennebunkport native, has been with KRC for six seasons, mostly at the seasonal Tides Beach Club. This is actually his second time around in this kitchen; he previously worked here for six years when it was the Port Tavern and Grill. Shaw jumped at the chance to take on duties at the Burleigh, even though it will mean not spending the winter snowboarding and cooking in Colorado, as he had been doing. He and general manager Justin Grimes helped shape the Burleigh’s concept. “My style of cooking was definitely a factor,” Shaw tells me. Classic pub food with an upscale twist dominates the menu, with an emphasis on seafood. “There are also global influences,” he says, “including tacos, gochujang barbecue chicken wings, and English fish and chips. The menu is a reflection of all my cooking experiences and travel.” A dish of Mexican street cauliflower is a delicious example, the roasted cauliflower showered with cotija cheese, lime, pickled red onions, and ancho chile crema, a play on elote, Mexican street corn. “Cauliflower is the new Brussels sprouts,” says Shaw. “When the word got out that I was coming back, people started requesting menu items that had been on the menu years ago.” His signature item, the blue cheese Maine mussels with bacon, caramelized onions, and a touch of cream, is as popular as ever. The smoked salmon dip is another old favorite, especially with a cocktail at the bar. New to the menu is a decadent dish of lobster mac and cheese made with Pineland Farms cheddar and presented in an iron skillet. The addition of charred poblano peppers and fresh corn make it a standout. A selection of sandwiches has been added as well, including Shaw’s decadent Burleigh burger, two patties of Maine-raised beef topped with pastrami. The hand-cut fries served with it are hot and crisp. The Fisherman’s Stew, one of the “Big Plates,” is terrific, a cross between cioppino and bouillabaisse. A large piece of pan-seared cod is surrounded with shrimp and mussels, all in a light saffron-tomato broth. Toast with a red pepper rouille adds a little kick and is perfect for sopping up the flavorful broth.

At the long mahogany bar, bartender Dustin Fournier is mixing up drinks for us. Restaurant manager Noelle Croce has developed the new cocktail menu that complements Shaw’s dishes. The names of the drinks are inspired by the town’s history, including the Billows, a gin and prosecco combination with blueberry-lavender shrub. The signature cocktail is the Riverhouse Old Fashioned, a savory blend of bacon-infused rye, Angostura bitters, Luxardo cherries, and garnished with candied bacon. Beer drinkers can choose from five taps of local brews, including Banded Horn and Baxter Brewing Co.

On the final evening of last week’s Kennebunkport Festival, I took a seat on the deck that overlooks the Kennebunk River. It was happy hour and the place was bustling, with groups of guests enjoying the sunny weather and a cool drink. This time of day is always popular at the Kennebunkport Inn, with drink and food specials daily. I ordered a glass of rosé and settled in, waiting for friends. If Burleigh S. Thompson could see the inn today, I think he’d approve. 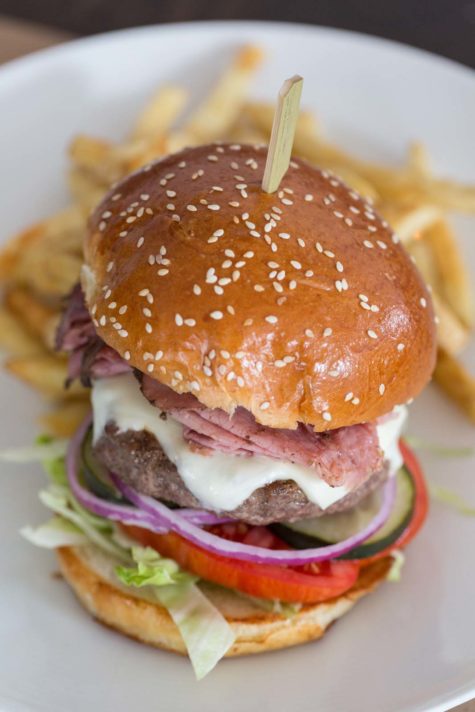 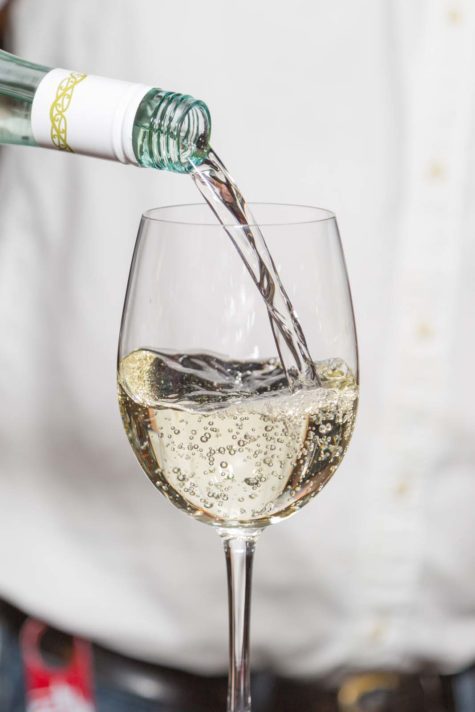