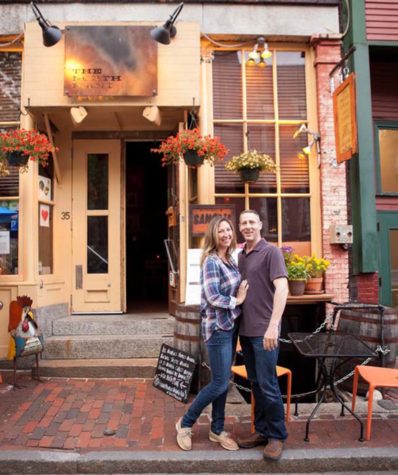 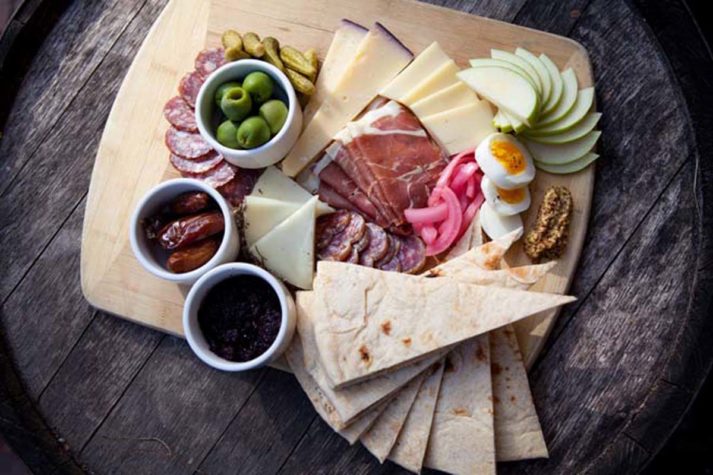 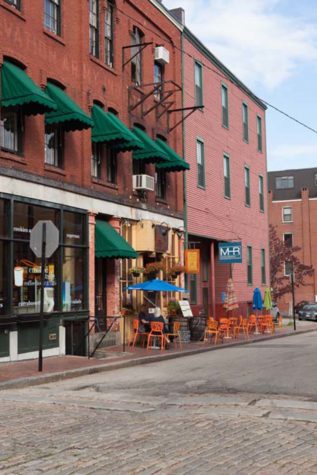 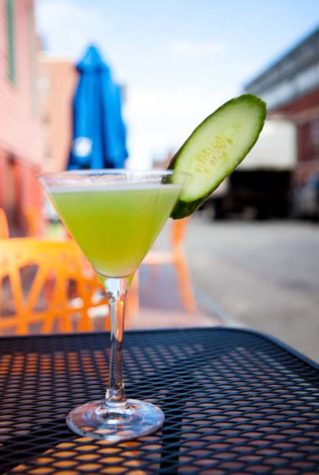 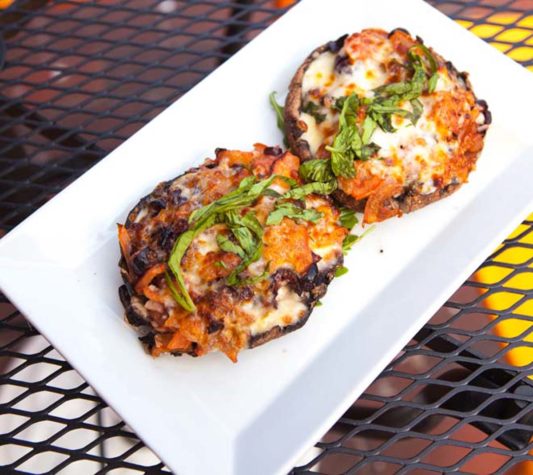 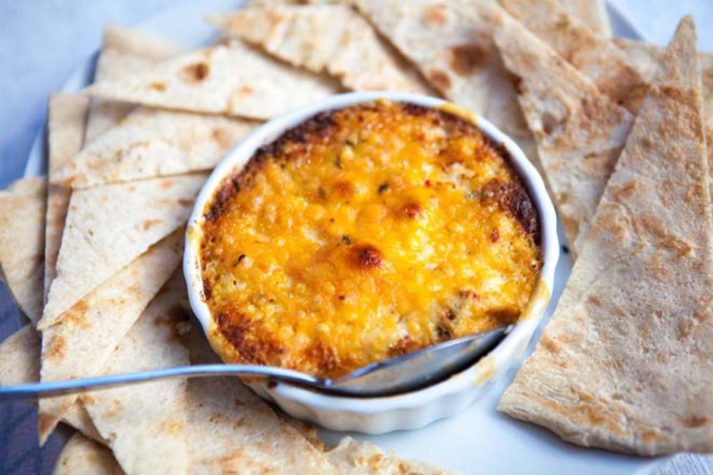 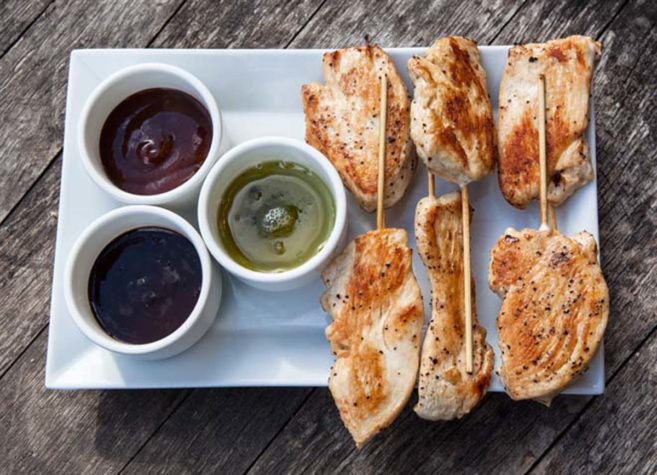 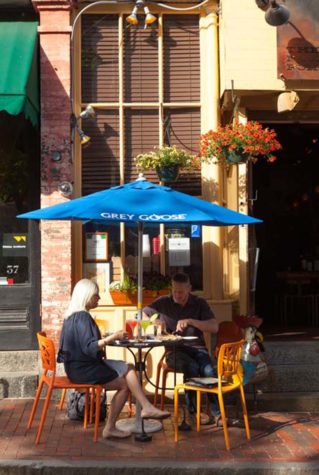 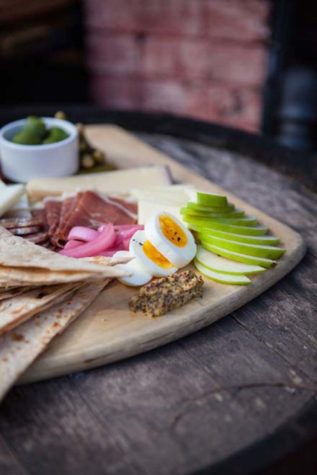 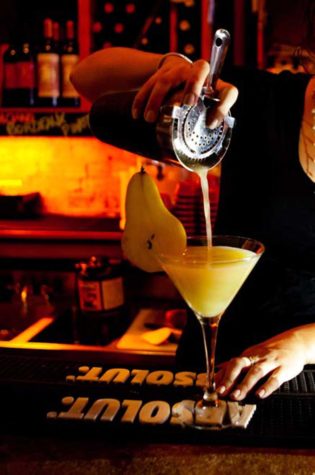 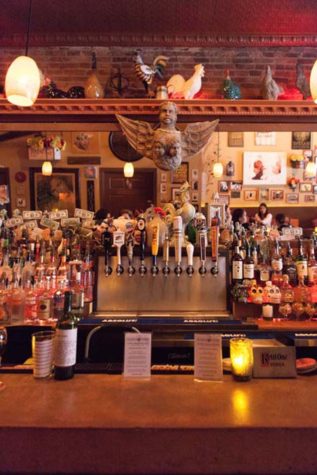 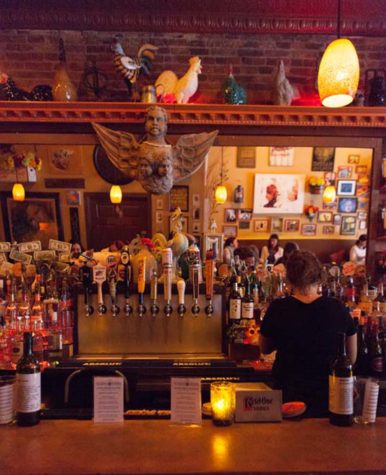 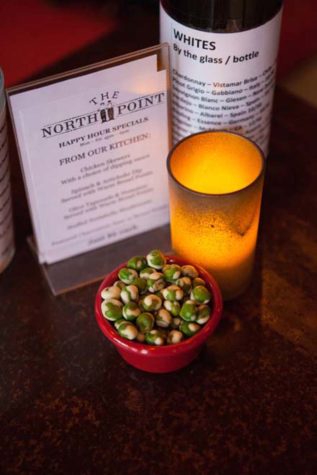 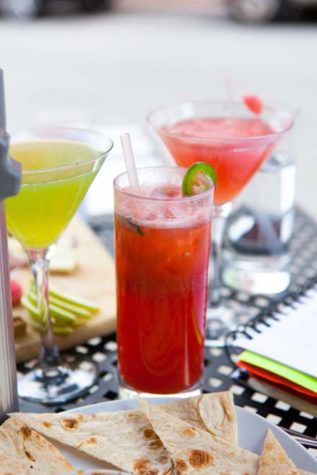 “You can judge with one sip, but it’s better to be sure.” This is just one example of “the wisdom and bad advice” you’ll find on the chalkboard outside the North Point every single day. Owner Dan Talmatch has fun coming up with the sayings, and it’s a good reflection of the lighthearted way he has with the place. “We’re a simple, happy place,” he says. “We’re not trying to be trendy, just warm and friendly.”

Talmatch and I are sitting at one of the outdoor tables on the sidewalk in front of the North Point. It’s still a little cool to be outdoors today, but we’re so happy for the fresh air and charming setting that the temperature doesn’t matter. The place is on a fairly quiet side street in the heart of the Old Port and has the feel of a Parisian sidewalk cafe, with several tables and bright orange chairs setting a happy tone and lots of potted flowers and greenery.

It’s only moments before manager Matt Lambert brings us cocktails to taste. The bestselling Cucumber Gin Martini looks delicious and one sip confirms that. I can’t imagine anything better on a hot summer evening, until I have a taste of of the Watermelon Martini, garnished playfully with a sour watermelon candy. Thankfully the drink is not overly sweet, just cool and refreshing. It’s a new creation for summer, as is the Jala-berry, a spicy-sweet concoction of strawberry puree, muddled jalapeno, lime, and tequila. The wine list isn’t extensive, but it contains all the favorites and a few surprises. Some lighter additions, such as vinho verde, are being added for the summer. As the sun starts to set, Talmatch tells me the story behind the North Point.

The little wine bar/restaurant opened in February of 2013, born out of a desire for Dan and Noah Talmatch, two brothers, who wanted to go into business together. Their brother Ezra had recently passed away, and they realized they wanted to spend more time together. Dan had been working in technology, but “Ezra’s passing created a whole new reason to find something else to do and make the most of time together with my brother.” Noah Talmatch (who also owns Timber steakhouse, which the duo also established) was the one with restaurant experience and he suggested the pair come to Portland. They discussed a concept at length and settled on the simplicity of “Fine Food and Drink with Old-Fashioned Friendly Service.”

The pair built out the interior of the former hair salon, making it cozy and inviting. Original artwork, much of it created by their late brother Ezra, is hung on the walls, bringing color to the neutral tones. There’s a big corner seating area built into the front window, a much-coveted spot in the winter months. Lighting is low and intimate over the long, cushioned bench against the wall. The vibe is warm and easy-going, what Dan calls “an adult bar.” There are no televisions, just great background music and an atmosphere that encourages conversation. This could be why many consider The North Point the perfect date place, for that first meeting and beyond. In fact, Dan met his wife Kelly here, the very first month they were open.

The menu is accessible and appealing, offering many plates that are good for sharing among friends. There’s a long list of charcuterie and cheese to choose from for customizing a platter. Found under the “Lite Bites” section is a beautiful, fabulous spinach and artichoke dip containing four types of cheeses. It’s served with an Iraqi flatbread, delivered to the restaurant almost daily by Ahmed Abbas of Ameera Bakery on Forest Avenue. The delicious, pita-like bread is found on many of the North Point’s plates and is the base for all the sandwiches, such as the Cubano, the cheesesteak, or the Ultimate Grilled cheese with tomato and bacon.

The popularity of the North Point is uncontested, but happy hour seems to be a favorite time for many. There are food and drink specials nearly every day, including $6 mojitos on Tuesdays. On Mondays, perhaps when it’s most necessary, every bottle of wine is half price after 6 p.m. The Talmatch brothers are doing it right and have created exactly what they wanted–an uncomplicated, welcoming spot for fine food and drink.