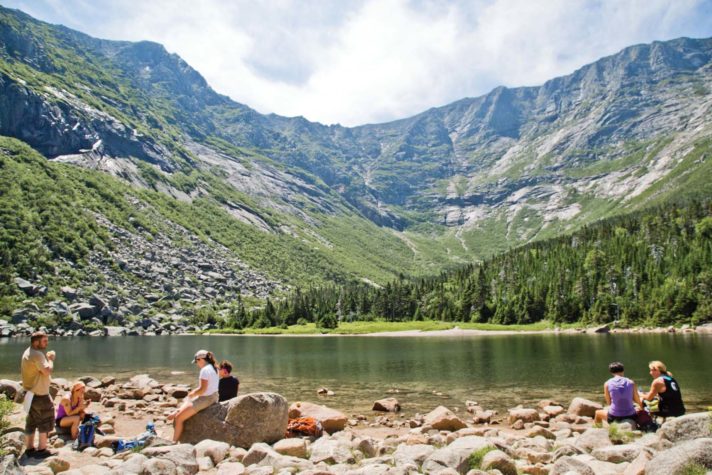 Hiking the same trails with the same views can get stale, even in Maine. Take this list, and run, or hike, with it to find a new summertime favorite.

When my boyfriend and I boarded the pontoon boat taking us across Moosehead Lake to Mount Kineo, the weather was fine. But by the time we arrived ten minutes later, rain was steadily falling. After hiding out at the island’s golf club for an hour or so, the rain reduced to a light sprinkle, and we decided to hit the trail. We were less than halfway up when it started to pour again. We laughed as we made our way slowly up the mud-slicked trails while the rain showered onto the canopy of leaves above us. The pathway up offered views of what was below, but the rickety fire tower at the top allowed us to fully take in Moosehead Lake and the surrounding land. By the time we were standing on the structure at the summit, the clouds had cleared and the sun was shining over the beautiful 360-degree view of lake and forest. —Kate Gardner

In Camden Hills State Park, Maiden Cliff is a moderate hike covering a two-mile loop. The trail initially follows alongside a brook, and where the two separate marks the start of a sharper incline. The footpath eventually comes to a plateau and open ledges, leading to views of Megunticook Lake 800 feet up. In 1864, an 11-year-old girl named Elenora French fell off the edge when a gust of wind blew her hat away. A white steel cross now rests in her remembrance at the top of the aptly named Maiden Cliff. —Emma Simard

While not as well known as other mountains on this list, Morse Mountain is my favorite hiking spot in Maine. It’s a one-of-a-kind place—even the dirt-road entrance is easy to miss if you don’t know what you’re looking for. The small shack in the gravel parking lot occasionally has a summertime attendant. Starting at a slow incline, the unassuming trail works its way downhill and across a marsh, eventually leading to a small wooden bridge that crosses a tidal stream. That’s the easy part.

The trail incline soon increases—still easily walkable but steeper. A colossal rock lines the right side of the path on your way up, inviting you to climb to the top of it. As you continue along Morse Mountain’s winding trail, you’ll eventually find yourself at a fork. On your right, there’s the lookout. On your left, there’s the beach. I usually start with the lookout because it is only a short distance from the fork. For the lookout, you’ll have to maneuver the footpath around a house to reach a granite bench atop the mountain. The view includes small rivers bending through the marsh to meet the ocean, and the sloping mountaintop rocks are great for soaking up the summer sun.

Back at the fork in the road and to the left, the trail to the beach begins. The path is winding and lined with old cracking pavement and small woodland creatures, ready to elicit a warning if you step too closely to their homes. Eventually, the ocean peeks out from behind sizeable boulders, the dirt turns into sand, and the path gives way to the beach. The beach is expansive, dotted with seashells and sand dollars, and is usually only populated by the few souls who like a reward at the end of their hikes.

For me, this place holds countless memories, and there’s always room to add a few more. Morse Mountain isn’t just a hike; it’s a means to co-exist with nature and leave the rest behind. —Emma Simard

The Atlantic coastline is visible from atop Mount Agamenticus, including views of the Isles of Shoals, Cape Neddick, York Harbor, and the Kennebunks. Looking toward the west offers breathtaking views of the White Mountains on clear days. The summit is accessible by car, but there are a variety of trails as well, including Turtle Loop a 2.2-mile trail with informational boards along the way that explain weather systems, local geology, and wildlife. Bear Loop, a 3.2-mile trail that’s just a bit more difficult than the moderate Turtle Loop, follows old roads. The Big A Trail allows for wheelchair and stroller access. —Sarah Prak

As a not-so-avid hiker, I think Beehive Trail looks like Everest. Standing at the trail entrance on a visit to Acadia National Park last year, the overall height wasn’t what concerned me—I could see the top from the ground—it was the steepness. As I began the ascent, I noticed the rungs in the side of the mountain and began to panic. One wrong move or slipped hand and I could fall. After a few deep breaths (and held breath at some points), I made it to the top. I was exhilarated. Then I took in the view. The thrill of the climb was nothing compared to the ocean spilling out around me. The vast blue spread out as far as I could see, and I knew the view was more than worth the fear I had experienced on the way up. —Kate Gardner

Located in western Maine, Tumbledown Mountain has something for everyone. With two trailheads, the hike can be completed with varying levels of difficulty. Loop Trail is the most rugged route, requiring climbers to pass through a gap in some large boulders—it is not recommended for children or animals. Just below the summit sits Tumbledown’s most unique feature: a pond. At nearly 3,000-feet above sea level, this treetop oasis welcomes all hikers who complete the trek. —Emma Simard

As Maine’s highest mountain at 5,267 feet, Mount Katahdin attracts climbers from all over the world. Its name is derived from an Abenaki word meaning “main mountain,” which holds true for Maine’s crowning jewel; the views along the way and at the summit are mesmerizing. Reservations are required to secure a parking spot. Parking reservations are only held until 7 a.m., so expect to arrive at Baxter State Park early and wait in a line of cars. Campsites and cabins are also available in the state park if you don’t want to drive in on the day of your hike. —Emma Simard

Located just west of Freeport, Bradbury Mountain in Pownal is great for a variety of activities in addition to hiking. It is the only state park in southern Maine with mixed-use trails, where horseback riders and mountain bikers share the trails with those on foot. There are also numerous campsites throughout the park. Although Bradbury Mountain is less than 500 feet high, Casco Bay and the Portland skyline are visible from the top. The summit is also a popular spot to view the annual migration of several hawk species. —Kate Gardner 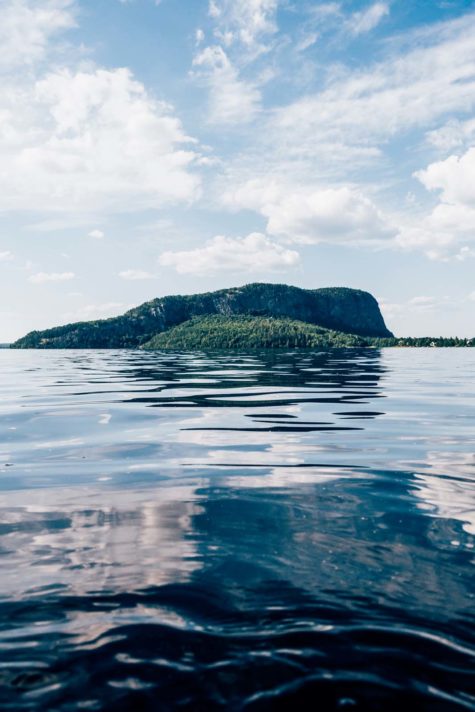