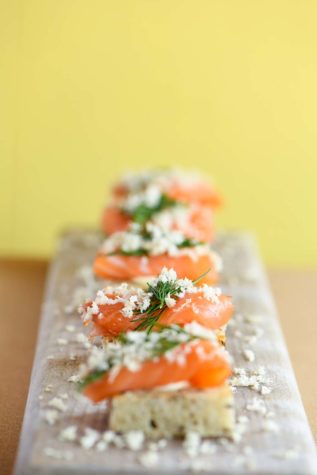 Chef and co-owner Ben Hasty’s house-smoked salmon is one of Thistle Pig’s “Classics”: six dishes that are always on the menu, identified on wooden planks in the dining room. 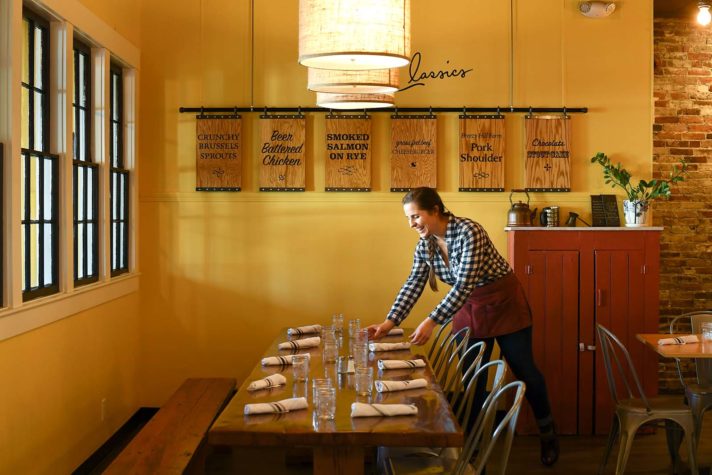 Server Staci Short is the restaurant’s longest-tenured front-of-the house employee. “She is my most trusted and loyal person I work with other than Ben,” says co-owner Jen Fecteau. 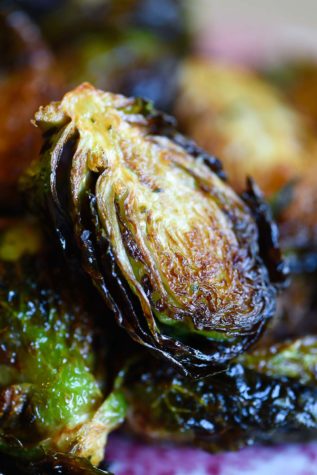 Fried Brussels sprouts are served with a cool, ginger-chile vinaigrette. 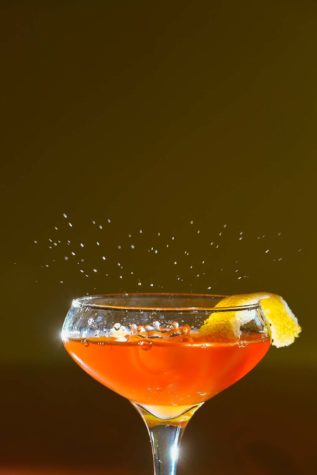 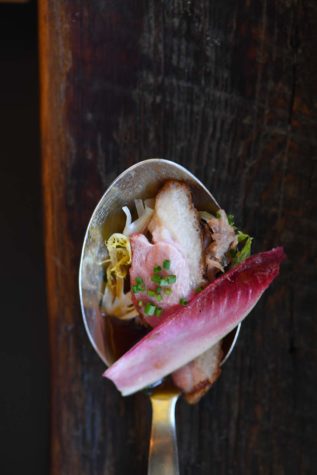 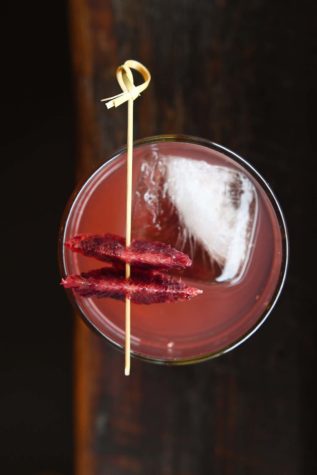 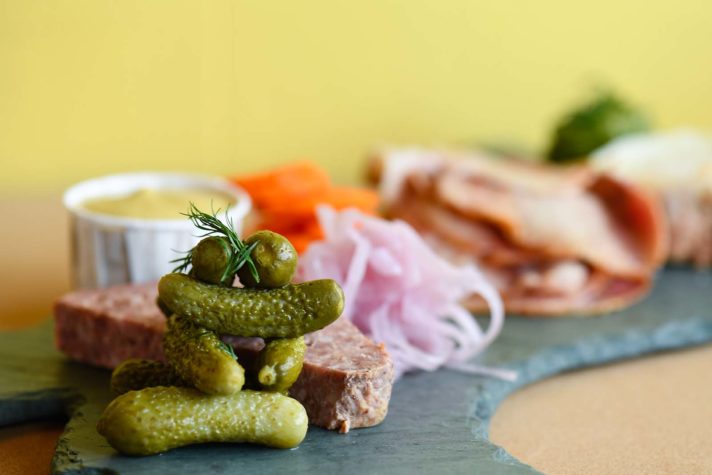 The meat elements of the charcuterie board—country pâté, smoked ham, and pork rillettes—are all made with pork from Breezy Hill Farm in South Berwick, owned by Hasty’s family. 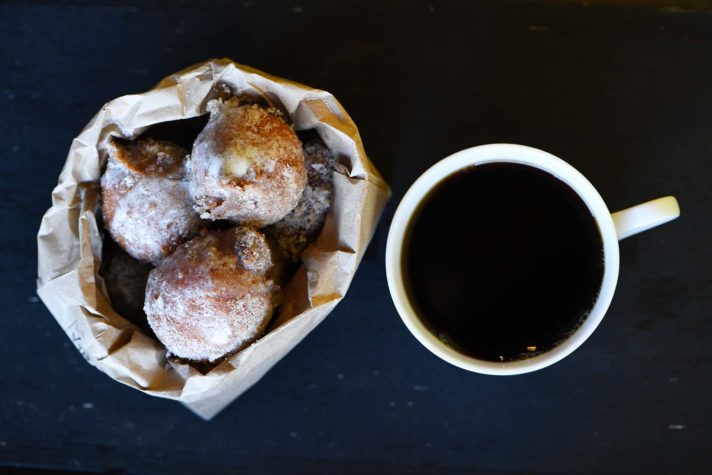 Fecteau’s desserts include hot, made-to-order doughnuts with cinnamon sugar and a creamy glaze. 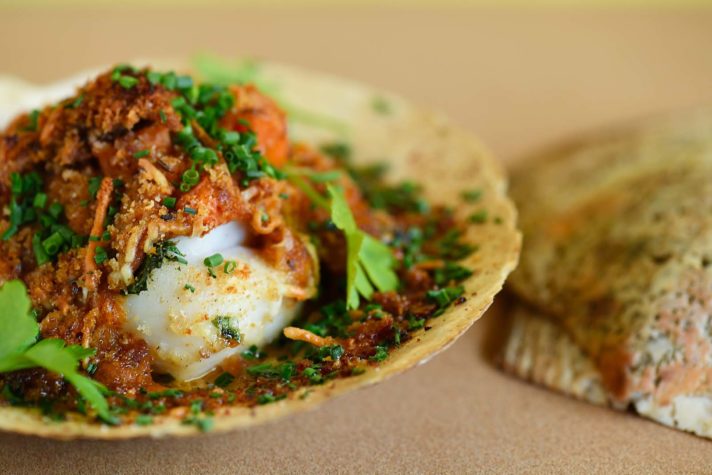 A savory start of baked scallops with bacon, breadcrumb, and braised vegetable topping. 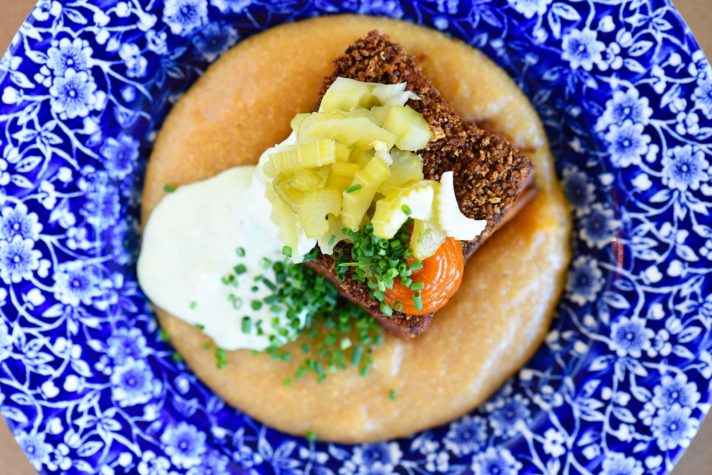 One of Hasty’s signature dishes is slow-cooked pork shoulder with buffalo sauce and chunky blue cheese dressing on a bed of creamy grits accented with pickled celery. 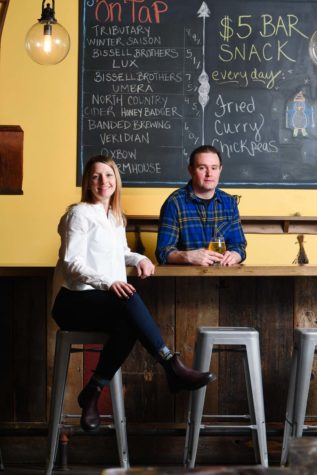 Five years in, the South Berwick restaurant is where Jen Fecteau and Ben Hasty hang their hats, and their hearts

Thistle Pig is the kind of restaurant that inspires people to think how much fun it would be to go into the business. On a Monday night in late winter, the storefront space on South Berwick’s Main Street is nearly full of what seem to be regulars, a number of them happily tucking in to the Moo and Brew Monday special: a grass-fed cheeseburger and one of five local draft beers for a reasonable $13. As she takes our drink orders, our cheerful server admits that it’s just her third shift here, but she’s been a Thistle Pig customer and loves the place, so it was an easy decision to take the job. Seated near a short hallway that leads to the kitchen, I hear the sounds of kitchen crew members enjoying their work over the restaurant’s Grateful Dead soundtrack, played loud enough to identify it but not to distract from conversation. With 56 seats between the dining room and adjacent bar, the look of Thistle Pig is minimalist yet warm, with two exposed brick walls and others painted butterscotch yellow, round pendant lights, and Tolix-style metal chairs and barstools. On one wall, a row of wooden planks suspended from a wrought-iron bar identifies “The Classics,” six dishes that are always on the menu, which otherwise changes every two months.

May 30 marks five years since co-owners Ben Hasty and Jen Fecteau opened Thistle Pig, a move that brought Hasty even closer to home than his three previous years as the chef at When Pigs Fly in Kittery. Having spent a good chunk of his career in high-end restaurants and hotels, Hasty’s homecoming was deliberate. A native of South Berwick, where his family has been farming for several generations, he grew up helping his dad on Breezy Hill Farm, now a supplier of pork products to top restaurants around the state. As a student at Atlantic Culinary Academy in Dover, New Hampshire, Hasty did his externship at the French Laundry in Napa Valley, and subsequently worked with chefs Mark Gaier and Clark Frasier at the now-closed Arrows in Cape Neddick; he also helped to open their restaurant M.C. Perkins Cove in Ogunquit. He was sous chef under Rob Evans at Hugo’s when Evans won a James Beard Award for Best Chef: Northeast in 2009. A year later, Hasty took a position as chef de cuisine at Boston’s Brasserie JO, the celebrated French eatery that closed last October after 20 years. His cooking at Thistle Pig shows not only a high level of technical skill but also the influence of the African, South American, and Nepalese cooks who worked alongside him in the enormous kitchen at Brasserie JO. “They would take a chicken, a couple of spices, and an onion, and it would be lights-out good,” Hasty says. But it was When Pigs Fly—known for its pizza, but also for Hasty’s excellent charcuterie made from Breezy Hill Farm pork—that firmly established him back home in southern Maine. “I had a lot of different options, but at the end of the day I’m a farm kid,” he says. “I live on the family land in the house my dad grew up in, through the woods from the house I grew up in.”

At Thistle Pig, the charcuterie board is a stunner, comprising a slab of meaty country pâté, a pile of smoky ham, and a little crock of lush pork rillettes, accompanied by sinus-clearing Dijon mustard, tangy pickled carrot coins, and gherkins. Another starter, Maine scallops baked in a shell with bacon and a crumb topping with braised vegetables, demonstrates that Hasty is as adept with seafood as he is with meat. With our apps, my dining companion and I sip two well-balanced cocktails: Get the Nurse, a citrus-forward blend of Benedictine, pisco, lemon, and bitters, and an Old Fashioned mellowed and made more interesting with a base of burnt sugar. The cocktails, wine list, and desserts are all Fecteau’s domain, as is the management of the dining room, which she does with accomplished and easy grace.

We can’t resist ordering the entree special, a rib-eye steak, also from Breezy Hill Farm. “I have solo buying power for the couple of cows my dad raises a year,” Hasty says. “I know their names; I write them on a big chalkboard in the kitchen.” (The beef for the burgers comes from those cows, too, a fact that makes the Monday “Moo and Brew” price seem even more reasonable.) The substantial rib eye, medium-rare and sliced off the bone, arrives on a generous pillow of mashed potatoes and braised root vegetables, blanketed with jus. It’s an example of both why sourcing matters and Hasty’s skill: the meat is fork-tender, the potatoes creamy, and the seasonings perfect. The whole assemblage is presented as it might be at home, its rustic charm enhanced by the vintage blue and white plate. The duck is another dish that appears to be earthy and uncomplicated yet has layers of flavor and texture due to classical techniques. Slices of crispy-skinned breast are napped with a dark, barely sweet orange-caramel sauce, while the confit leg is tossed with frisée and hard-cooked egg. Given the origins of this preparation, a glass of rose from Domaine Le Grand Rouviere in Provence is an ideal match. Far less traditional is Hasty’s signature slow-cooked pork shoulder. Pressed into a fat square on a bed of creamy grits, the pork is covered in spicy buffalo sauce and chunky blue cheese dressing accented with thinly sliced pickled celery—an unusual combination that somehow works deliciously. It’s one of Hasty’s “classics” promoted on the wall, as are the hot fried Brussels sprouts we spear with our forks again and again, dipping them into a dish of cool ginger-chile vinaigrette.

Having read more long-winded and overly complex menu descriptions than I can count, I admire Hasty’s directness. The duck, for instance, is described as “Orange Glazed Duck Breast–Duck Confit and Frisée Salad,” which is both succinct and enticing. “I don’t use fancy words,” Hasty says. “Let’s say there’s pot roast on the menu. If you care, I can tell you that I buy whole animals, and that’s where the beef comes from. It’s served with potatoes that are a nod to potatoes Robuchon”— the uber-creamy and light mashed potatoes made famous by French chef Joël Robuchon. “If you’re interested, there’s a story to every step and every ingredient. If not, it’s just pot roast.” The keep-it-simple philosophy equally applies to the dessert menu. While chocolate stout cake with vanilla bean frosting is one of the Thistle Pig standards, we’re drawn to the maple crème brûlée and Maine potato doughnuts. The brûlée is an exceptional rendition of the ubiquitous sweet, its caramelized sugar lid sturdy enough that it takes a couple of raps with a spoon to break through to the creamy, maplescented custard. The doughnut holes, sweetly presented in a rolled-down paper sack, are piping hot from the fryer, dredged in cinnamon sugar, and drizzled with a confectioners’ sugar glaze.

The apparent simplicity of those doughnuts gets me thinking I could make them at home, but it’s not as easy as it looks. Similarly, the relaxed, convivial atmosphere of Thistle Pig and the familiar nature of the food make running a thriving restaurant look easy, but of course it’s not. “We’re dug in, and we’re happy,” says Hasty. “We put the bones up, but it’s the experience we get from everybody that makes it a success.” As I scoop up a final bite of crème brûlée, I can’t help but feel a teensy bit envious of the people around us, who live close enough to Thistle Pig to make Moo and Brew Monday a regular thing. Hasty could be racking up accolades anywhere in the world, but it’s clear he’s home to stay. I hope they know how lucky they are. 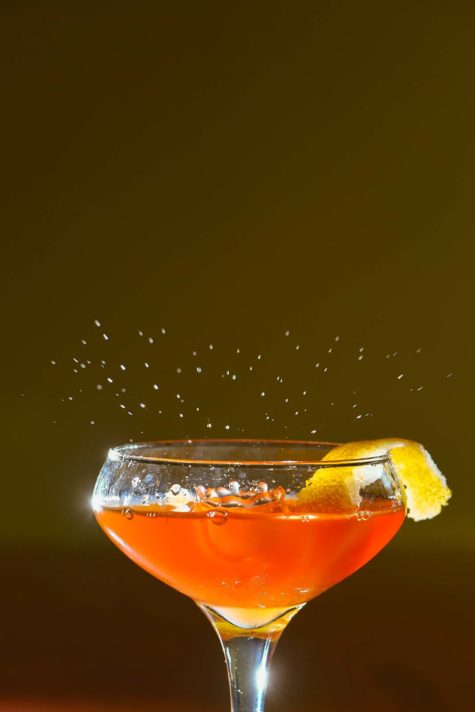 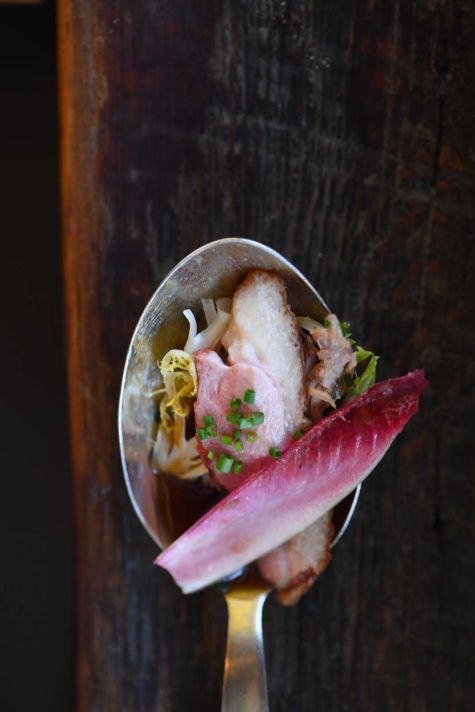 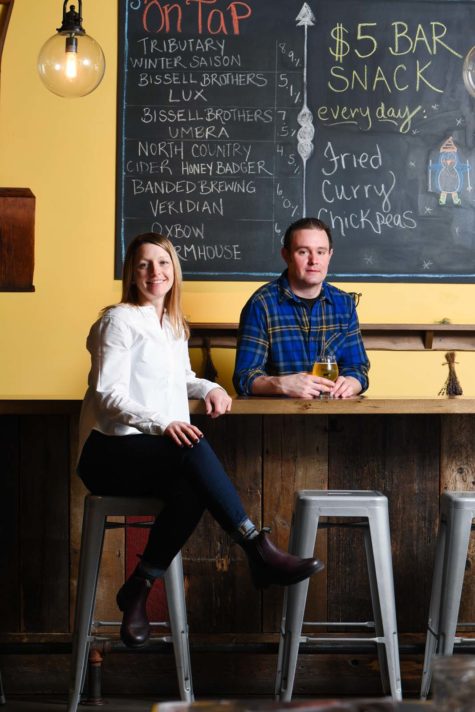