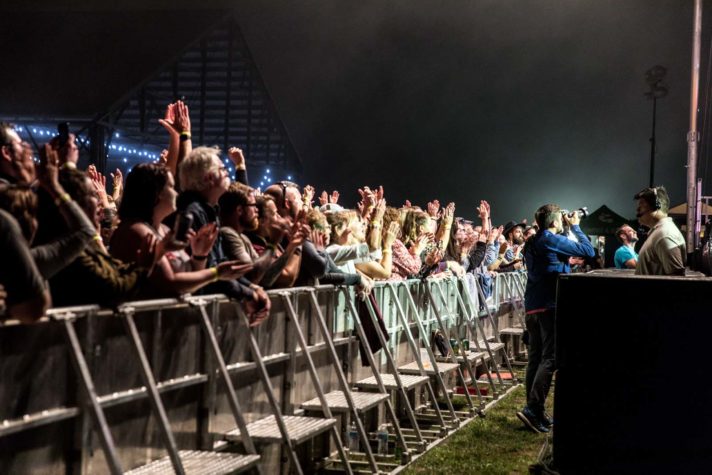 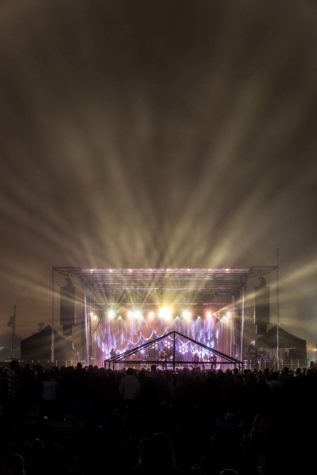 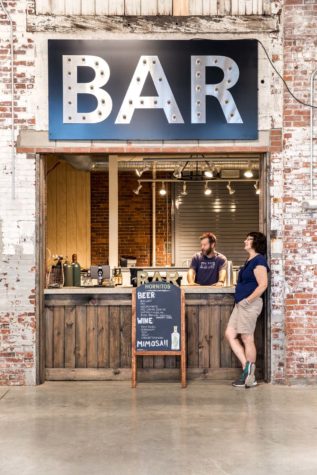 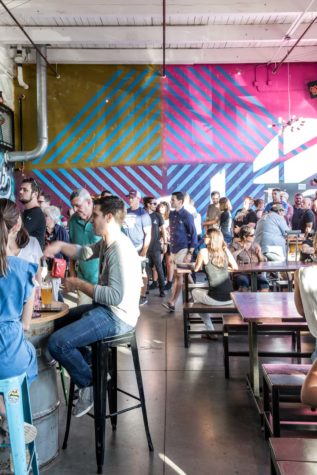 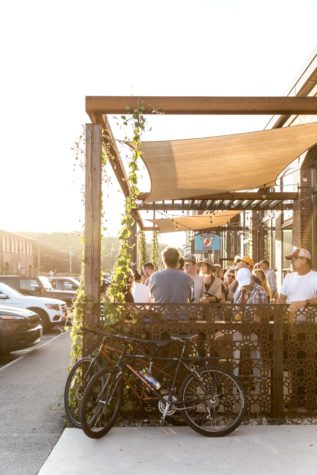 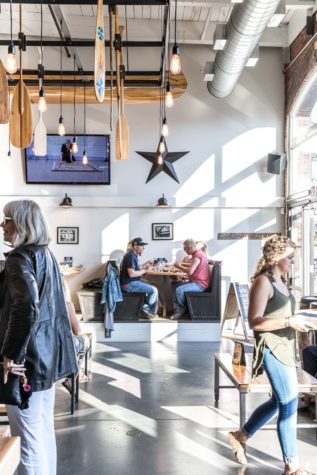 Until a few years ago, visitors driving into Portland on I-295 North may have barely noticed the derelict brick buildings and mysterious steel-frame structure on the piece of land jutting out into the Fore River. Most people probably assumed, as I did, that the desolate spot, Thompson’s Point, was just another urban wasteland, too far off the bustling Portland peninsula to merit attention. Once the southern terminus of the Cumberland and Oxford Canal, which carried lumber and other products from the Sebago Lake region to Portland, and later a railroad yard, Thompson’s Point had become an eyesore by the early 2000s. The two long brick buildings used for train car repair in the railroads’ heyday sat empty and damaged, surrounded by various pieces of industrial junk. Today, Thompson’s Point has emerged from the scrap heap to become a vital piece of the city’s entertainment landscape, especially in the summer, when concertgoers set up chairs on a broad swath of lawn ringed by food trucks, and listen to national acts such as Wilco, Brandi Carlile, and Alabama Shakes, while watching the sun set over the river. The restored brick buildings are home to a brewery, a distillery, and a winery tasting room, as well as event spaces and a tiny, strange museum. More is on the horizon.

The plans for Thompson’s Point were initially more ambitious, perhaps too much so. Beginning in 2009, a group of local investors proposed that the buildings be demolished and everything swept clean to make way for the Forefront at Thompson’s Point, a proposed development that would have included office buildings, a hotel, a concert venue, a huge parking garage, and a convention and events center that would be the home of the Maine Red Claws basketball team. The proposal fell apart for financial reasons, leaving the door open for the more gradual development advocated by Greater Portland Landmarks, whose website lists Thompson’s Point in the “Success!” section. The preservation group applauds developers Chris Thompson and Jed Troubh’s repurposing of the historic train repair sheds, now named Brick North and Brick South, and the restoration of the steel-frame structure, a platform shed which had been moved to Thompson’s Point in the 1960s from Portland’s Union Station when the station was torn down.

The Portland Planning Board approved the developers’ new $110 million master plan in 2014. By the summer of 2016, the building was occupied by Bissell Brothers, Cellardoor at the Point—a glamorous 5,000-square-foot wine-tasting room and event space—Stroudwater Distillery, and the International Cryptozoology Museum, which is devoted to creatures such as Bigfoot, the Loch Ness monster, and mermaids. Brick North is now also home to digital design and software company Big Room Studios, the burrito cart-turned-restaurant Locally Sauced, and Halo at the Point, an event, performance, and photo/ video production space with sophisticated lighting and sound capabilities. Brick South has been reborn as a 25,000-square-foot venue that hosts the monthly Maker’s Market at the Point, as well as weddings and private events. In the winter months, the former train station platform shed, now called the Depot Pavilion, shelters an ice skating rink, while an adjacent yurt serves local beer on tap.

Not much of this development was in place in 2015, the first summer the State Theatre in Portland presented a series of outdoor concerts at Thompson’s Point. It’s a relaxed, friendly venue that performers seem to like as much as fans; a couple of years ago, I watched Michael Franti kick around a soccer ball and pose for photos with kids on the grass before taking the stage with his band. This summer, the lineup includes Death Cab for Cutie, Maggie Rogers, Lord Huron, and, on Labor Day weekend, the second Ghostland at Thompson’s Point, featuring local favorite the Ghost of Paul Revere, along with other musicians. Every Thursday at 4 p.m., Summer Sunsets on the Point includes food trucks, beer, wine, cocktails, lawn games, and activities for kids. Dogs are welcome, too.

By next summer, Thompson’s Point will be even more of a year-round destination. Construction is well underway on the Children’s Museum and Theatre of Maine at Thompson’s Point, which is expected to move this fall from its current location next to the Portland Museum of Art. The three-story, $14 million facility will double its size, with a climbing structure and 100-seat theater on the first floor and interactive exhibits on the second floor, including large marine life touch tanks, as well as outdoor play areas. Builders are breaking ground this summer for Hotel Portland, a 148-room boutique hotel under Marriott’s Tribute Portfolio brand featuring a restaurant, “speakeasy” bar, rooftop terrace, and indoor pool.

Right now, there are no set plans for adding residences to the development, but the master plan includes the even- tual construction of 335 residential units. Thompson, the developer, is excited about that possibility down the road. “We’ve looked at Thompson’s Point as the creation of a dynamic mixed-use neighborhood, and our goal is for it to feel like something that has always been part of Portland,” he says, adding that collaboration with tenants, visitors, and the city is vital to the successful evolution of the proj- ect over time. “Even when we add new things, we always ask first, ‘Is this something that could only belong here, and will it add value and synergy to what’s already here?’ We want anyone and everyone to feel welcome, and that this is a place where they want to be.” 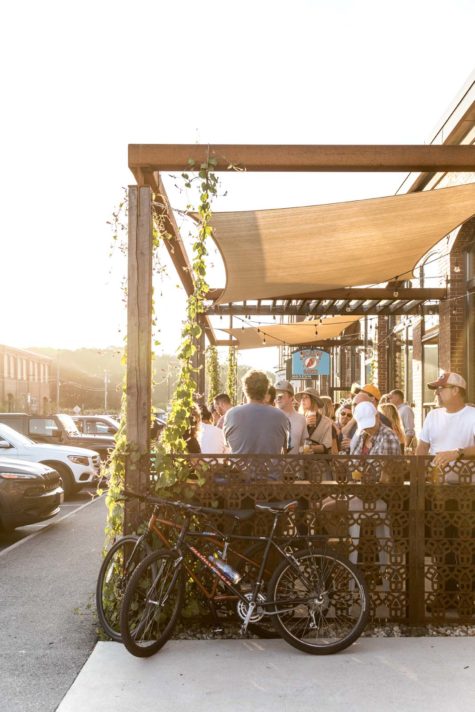 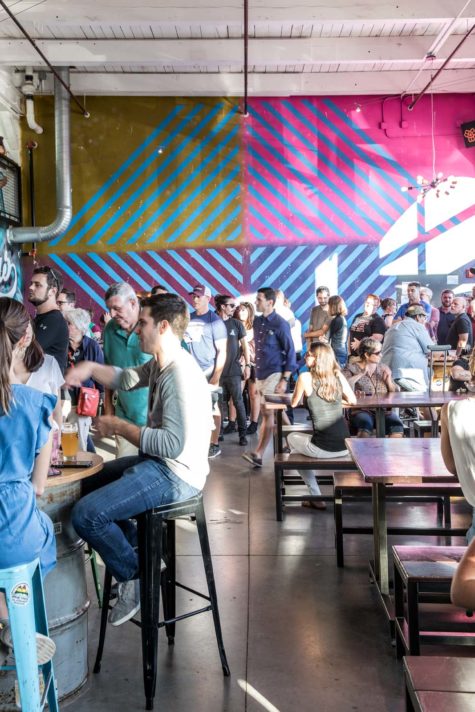 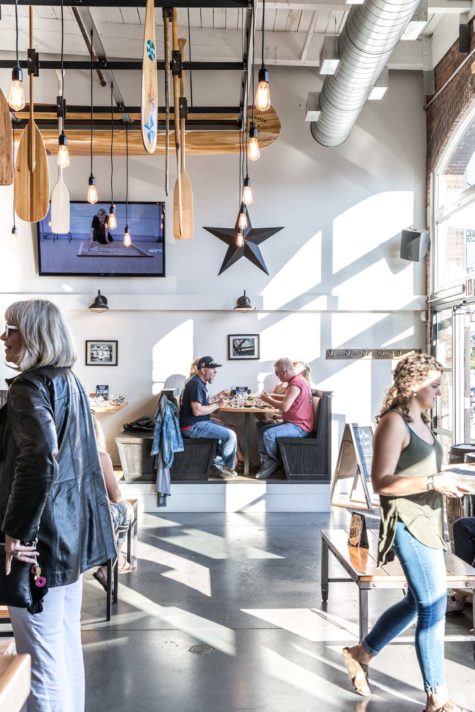