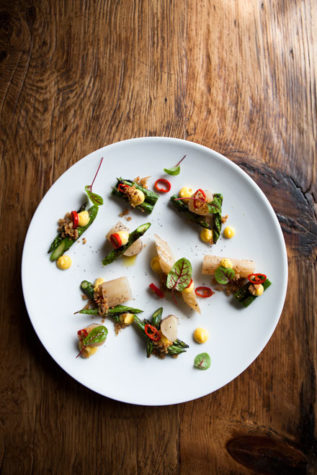 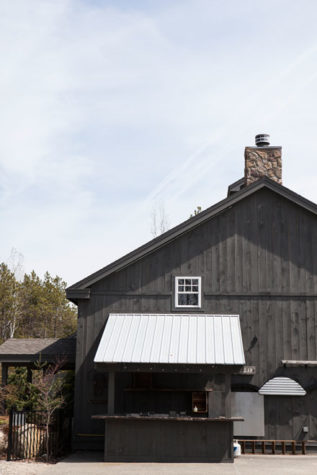 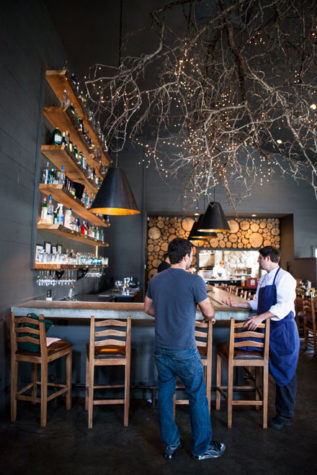 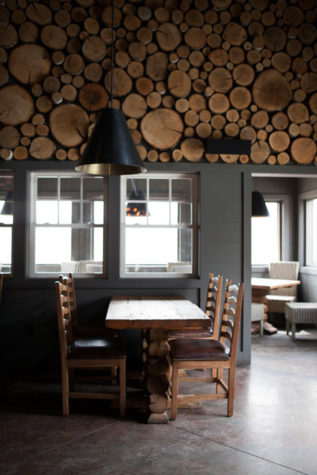 Inside the dining room at Earth 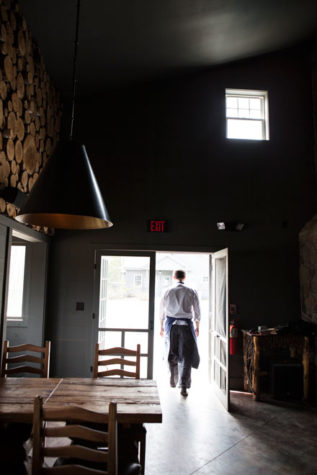 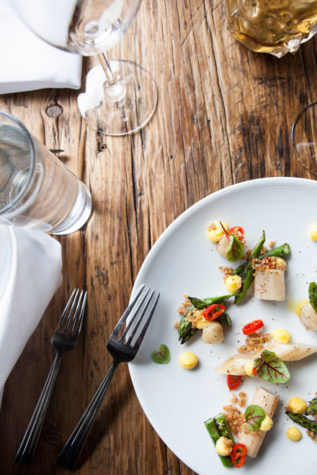 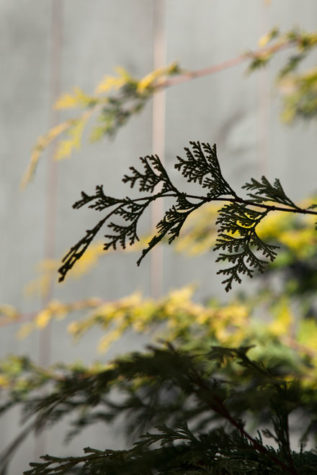 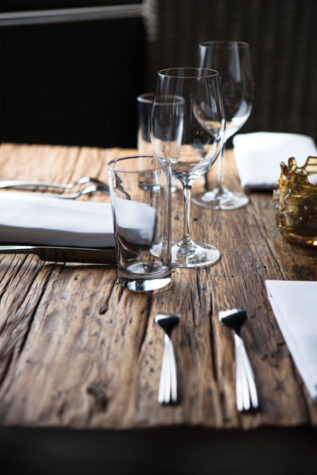 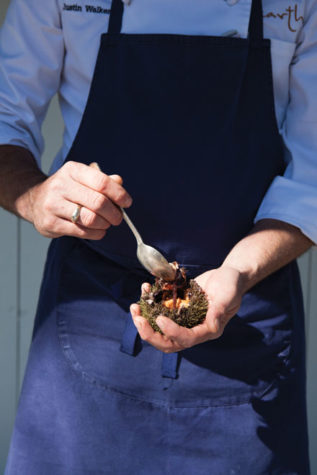 Using the best of what's around 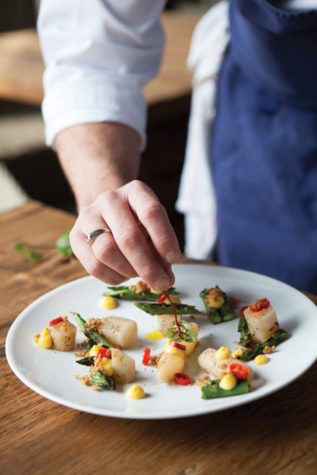 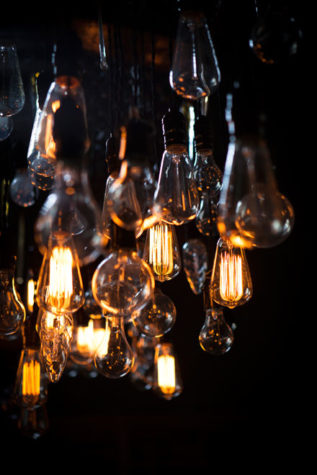 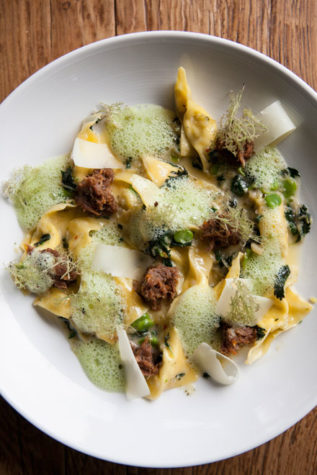 Adapting with the seasons 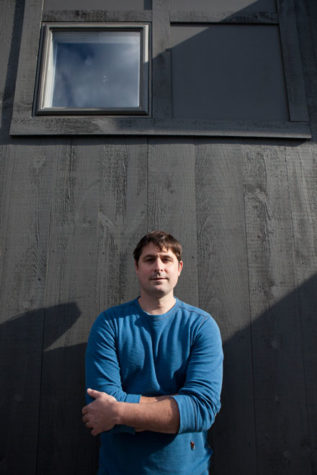 From knives to arrows to Earth: Chef Justin Walkers smart take on farm to table

“I gutted and fabricated my first white-tailed deer at the age of 12, using a 40-year-old buck knife.”

Such fond memories are the backbone of what has made Earth at Hidden Pond’s executive chef Justin Walker the cook he is today. When asked about his influences in the culinary world, the first image he conjures up is of his grandfather, who served as a cook in the army during World War II. He was intensely passionate about great Italian-American fare, and as a kid, Walker would often be called to the kitchen to help prepare holiday feasts. During the summer, his grandfather would take him into the woods to forage for wild mushrooms and dandelions, and he recalls simple yet inspiring meals, prepared entirely outdoors with his family.

“We didn’t eat out much when I was a kid. My dad was a hunter and fisherman so we spent weekends together in the woods and streams of upstate New York,” Walker recalls. “I remember striking out to the western part of the state in search of the best corn, and then off to the Amish market for amazing melons. We would barbeque steaks and chicken over wood, before tossing the corn on to the fire, husk and all. There would be potatoes wrapped in foil and buried in the hot coals until they were perfect.”

Memories of these fresh, hard-won meals of his youth stayed with him for years. “All of these things are why I am so fond of anything cooked over an open fire.” Walker adds, “There were no immersion circulators back then!”

Walker’s confidence in cooking outdoors will come in handy this June. As part of the annual Kennebunkport Festival, Walker will be joining renowned chefs Melissa Kelly, Jody Adams, and Pichet Ong for an event that is fittingly named Wood Fired Maine. On June 6, Walker will return to his culinary roots and prepare food over an open fire for guests at the Wells Reserve at Laudholm, proceeds from which will go to Share our Strength Maine. “As a chef, it’s rewarding to be able to do something for other people,” he says.

Walker took his first job in the kitchen to help support another passion: competitive skiing. When he first started working in kitchens, things were quite different.  “Back then, balsamic syrup was considered cutting edge and blue corn cakes garnered just as much attention as crispy pork belly does today,” he says. After working his way through the underbelly of several restaurants, Walker decided to get serious and enrolled at the New England Culinary Institute, where his previous experience served him well. Through the institute, Walker secured an externship at Arrows, the acclaimed Ogunquit restaurant. He worked his way up from line cook to sous-chef, eventually landing the role of chef de cuisine after 15 years of hard work.

When Walker took the reins at Earth, he set out to implement a menu developed primarily on the flavor profile, with aesthetics playing a secondary role. His strategy is simple: “It’s what and how I love to eat; it’s inventive yet not strange.”  Hidden Pond caters to droves of guests from major cities throughout the summer months, and, as Walker puts it, “the last thing they want is what they get every day at home.”

While Walker cites several European chefs as his primary culinary influences, his menus showcase different world cultures. Classics like seared foie gras are combined with Southeast Asian ingredients like sambal and black garlic, while other dishes remain in their purest form, such as pizza with San Marzano tomatoes, mozzarella, and basil.

“Each dish is a sum of its own parts,” Walker explains to me as he walks me through the preparation of Earth’s wood-fired asparagus with salsify, green garlic curd, pickled chilies, and duck cracklings. “At first glance a dish like this may seem tedious,” he says, “but really each ingredient plays an important role in elevating the asparagus.”

One of Walker’s proudest achievements is collaborating with his wife, Danielle, in renovating her family’s old farmhouse. This decision came eight years ago, after Walker’s father passed away from cancer, the hardship of which reminded him that life is simply too short not to take action. “And with our love of food it just makes sense.”

They started with a single horse, and have now expanded to eight horses, eighteen goats, and a multitude of chickens and ducks. Danielle’s mother tends to the extensive gardens, growing a number of exotic peppers, long beans, and pumpkins, to name just a sample. A good portion of the produce ends up on the menu at Earth.

With an arsenal of goodness like this at his disposal, Walker has found himself at the height of his game, yet his philosophy remains simple:

“After you eat dinner at Earth, I want you to feel nourished.”