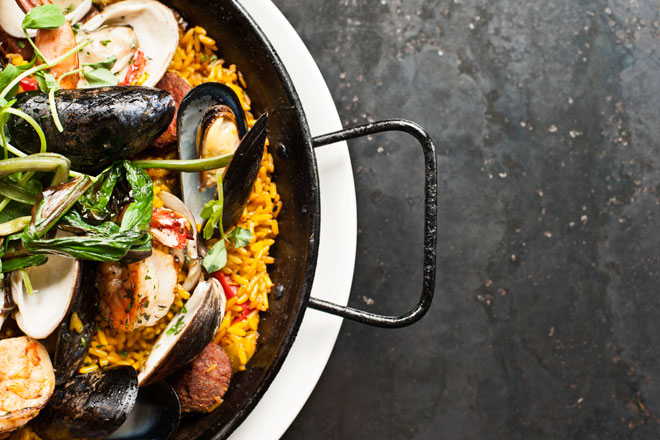 The paella that started it all 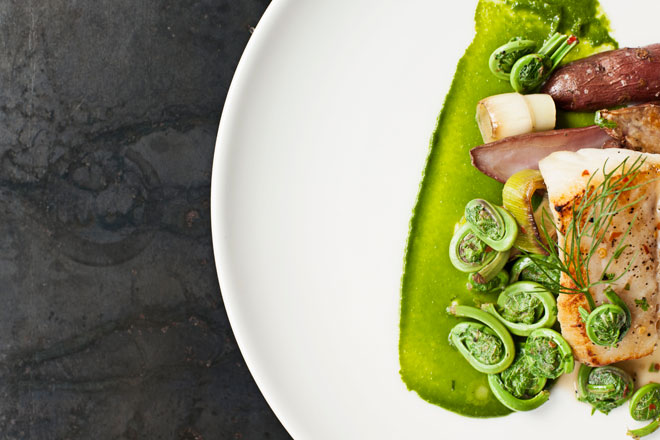 At Local 188 the menu changes seasonally. 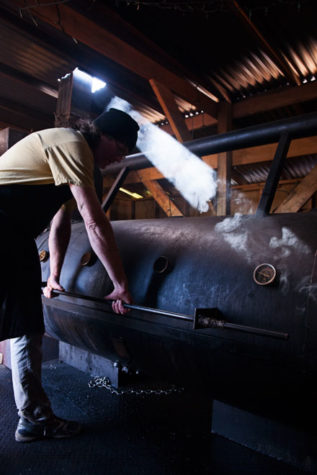 Villani constructed the smoker himself out of an old propane tank. 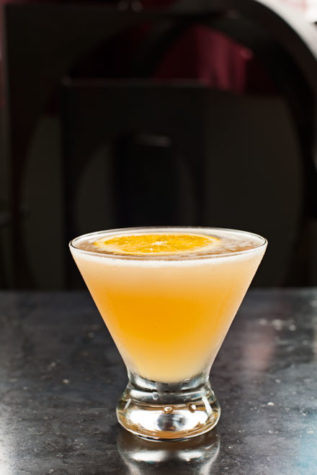 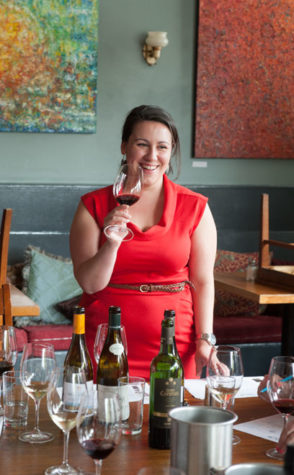 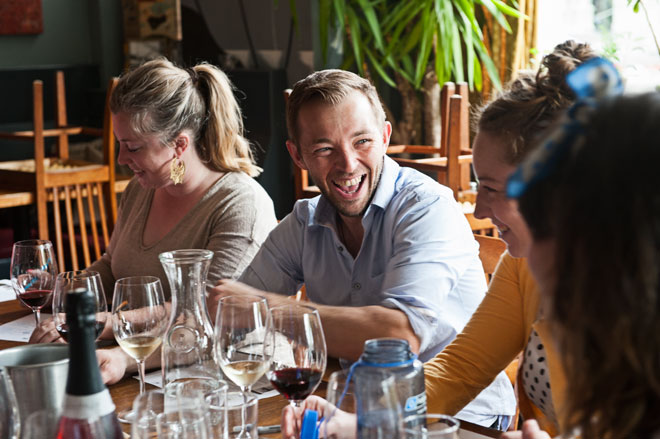 The crew comes together at Local 188 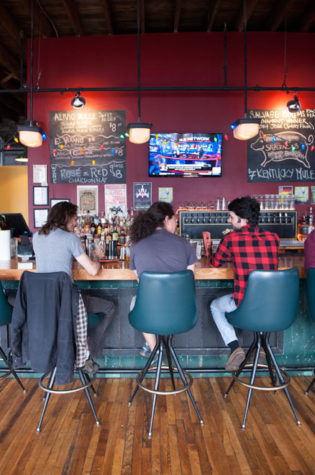 An ever-rotating draught selection at Salvage 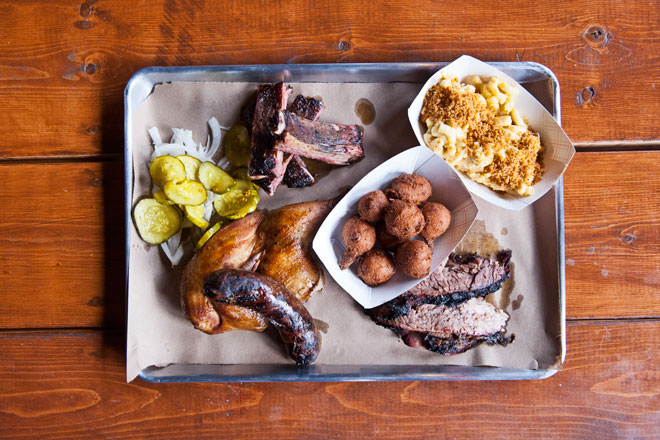 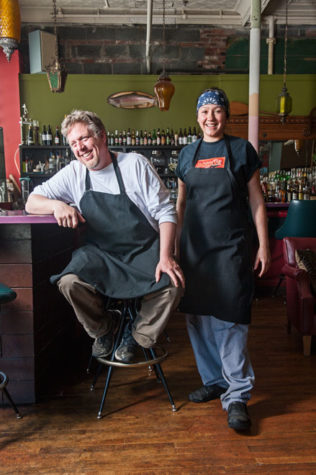 “The prodigal son returns. I really don’t know what that means, but I do know it’s what one is supposed to say in this situation,” says Jay Villani. This is typical of him: an offhand comment that is seemingly dismissive, but contains more than a kernel of truth.

Villani’s decision to return to the kitchen at Local 188 comes after an extended absence, a time he spent opening and maintaining the operations of his other two successful Portland outposts, Sonny’s and Salvage BBQ. Though nearing 50 (which, as he tells me, is like “300 in chef years”) he has grown as a cook, learning new methods and old tricks, and discovering a new appreciation for the art of plating dishes. He has also grown wiser, learning one of the most important lessons in the restaurant world: how to delegate responsibility when necessary. When I first met Jay, he was the kind of guy that preferred to bear the weight of the world on his shoulders to ensure that things were done his way. Now, he has a certain amount of trust in his methods and his people that has put him more at ease.

Villani’s road has been a long and unconventional one. Of his beginnings in the restaurant business, he says, “Like others, I started in a dish room. I was so lost as a kid, I fancied myself an artist, yet I definitely gravitated more towards the lifestyle than the actual craft. I did a lot chasing—music, art, you name it—all the while working various gigs in both the front and back of the house. I figured that something was going to stick.”

It did. In the mid to late 90s, Villani was running a small gallery in Portland with his then-girlfriend, now wife, Allison. After bouncing in and out of kitchens, the gallery gave him the first taste of working for himself, and he knew couldn’t go back. He and Allison began conceptualizing a bar, focused on serving tapas, which would double as an art gallery and provide a gathering place for the local art scene, which already relied on him for feeding. In 1999, with the help of friends Matt Purington and artist Pat Corrigan, Local 188 opened its doors. Villani says that the moniker has nothing to do with the farm-to-table or locavore movement (“Don’t even get me started on the piety of these two ideas,”) but was rather meant to signify a worker’s union of sorts. Of course, it was also a reference to the establishment’s address: 188 State Street.

Working with ingredients and flavors representative of the Moorish influence on Spanish cuisine, as well as parts of North Africa and Italy, Local 188 became known for an eclectic array of small plates—not to mention Villani’s specialty, paella. Referring to his preparation as “old school,” he utilizes short-grain rice, local shellfish, and chouriço. This last ingredient is handmade, and the entire dish is topped off with a liberal amount of saffron and roasted until the crust, or socarrat, is golden-brown.

After eight years at its original location, Local 188 was at a crossroads. The lease on the original space was up, and when an opportunity came to move into a spot across the street, Villani jumped at it.

The primary challenge of the new and much larger space on Congress Street was to impart the same eclectic feel and attitude that had inspired so many loyal patrons during the first eight years. The random, mixed-up pieces of furniture were still there, patrons still drank coffee out of a plethora of strange old mugs, but now the restaurant had to be primed to handle a vastly larger amount of business, including one of the most popular weekend brunches in the city. Undaunted, Villani crashed through the would-be expected series of growing pains, while continuing to build a more diverse clientele.

During my tenure as a bartender at the new Local in 2008, I watched as Villani took a regiment of cooks under his wing, instilling in them his simple mantra: “We might not hit it every night, but we are damn well going to strive for it.” When we did hit it, it was a thing of beauty, a massive dining area working completely in tandem to accommodate a frantic dinner rush, which gave way to swelling crowds that could at any moment erupt into a chaotic dance party. Of course, when we didn’t hit it, you could always see it all over Villani’s angry red face, and it was not an uncommon sight to see a server crying while the line tried frantically to recover from a tailspin.

By the time Villani closed on his new restaurant, Sonny’s, it was clear that a break from Local was in order. He had good people in place there, and although it was a big change for him, he knew he was more needed at the helm of Sonny’s, with its mostly new team. Immediately he set about constructing a menu that would incorporate his interest in the flavors of Mexico and the Caribbean. This meant braised rabbit enchiladas, ladled with a deep, complex mole sauce, as well as one of the city’s best Cuban sandwiches, griddled with tender pork, crunchy pickles, and a slathering of piquant mustard. He offered sweet corn tamales smothered with everything from smoked goat to Maine shrimp, which were perfect with a side order of Puerto Rican-style fried plantain chips, or tostones. Like all of Villani’s establishments, Sonny’s adapted to its clientele, fostering a very healthy bar crowd and yet another popular brunch service.

Meanwhile, over at Local 188, Villani had appointed one of his cooks, Josh Craigue, to start dabbling in the art of smoked meat. Every night there would be a smoker set up at the side door, its aromas wafting into the parking lot. Not long afterward, Villani announced plans to open a barbecue joint at an undisclosed location in Portland. He assembled a crew to go on a barbecue pilgrimage, touring extensively through Texas and the Carolinas in search of a religious meat experience. Upon return, he immediately set to constructing a smoker out of an old propane tank and began a long process of trial and error to get his menu right.

The process of opening what would be known as Salvage BBQ affirmed something for Villani—“that I actually know what I’m doing as cook.” He explains that so much of his career has been unorthodox and via “the backdoor,” that to grasp the understanding of such a basic, primal form of cooking so easily has validated all of the time he has spent toiling away in the kitchen. “It has given me a foundation that I thought I was missing,” he says. The process of slow-cooking meat has been “eye-opening, with so few variables between the wood, fire, and timing, and yet so easy to screw up.” He concludes, “There is nothing more demoralizing and than spending hours smoking meat and to have it turn out awful.”

Salvage BBQ officially opened in the summer of 2013, serving heaping portions of fatty, melt-in-your-mouth brisket, smoked chicken, ribs, and pulled pork, to name a few, notoriously offering the full boat to diners under the guise of “Meat Fatality.” Not long after the opening, Villani realized that it was in capable hands with Craigue. All good businesses are about having good management, and while Salvage was thriving, he begin to sense that Local was suffering. “Through no one’s fault but my own, from a lack of clear leadership,” he clarifies, “I had people in place who afforded me to go off and do other things, but everyone grows and good people move on. It’s just the nature of what we do.”

Villani knew that he had to jump back in, and his first order of business was to rehire one of the casualties of his absence, chef de cuisine Christina Seeley. He recalls simply texting her, “Need a job?” and within 10 minutes she replied: “I’ll give my notice.” Villani is “beyond grateful for the level of focus and intensity that she brings to the table,” declaring that “now I can’t imagine the place without her, and hopefully I never will.”

Together they have created a menu that pays homage to the Local of the past, with garlic hummus flatbread, truffled steak tartare, and classic paella, while simultaneously giving it a much-needed update. New dishes incorporate Mediterranean flare, as with gnocchi served with a tapenade of black mission figs and castelvetrano olives atop beet mascarpone, or rotating seasonal versions of their Pineland Farms braised short ribs. Villani has been paying special attention to curing meats and fish as of late, professing, “salt and sugar are my friends.”

While much has changed since the early days of Local, Villani is truly excited to be back in a kitchen, surrounded by creative people who share his love of food. “It’s inspiring and I am constantly learning, and I cannot stress enough how lucky I am,” he says.

He concludes by telling me how he ends almost every phone conversation with his 90-year-old father, whom Villani calls “the silver fox.” Their time-honed banter goes like this:

Pop: Huh. Got to be honest, kid, never saw this one coming

Villani: Me neither, Pop.

Villani still has a few surprises up his sleeve for all of us.