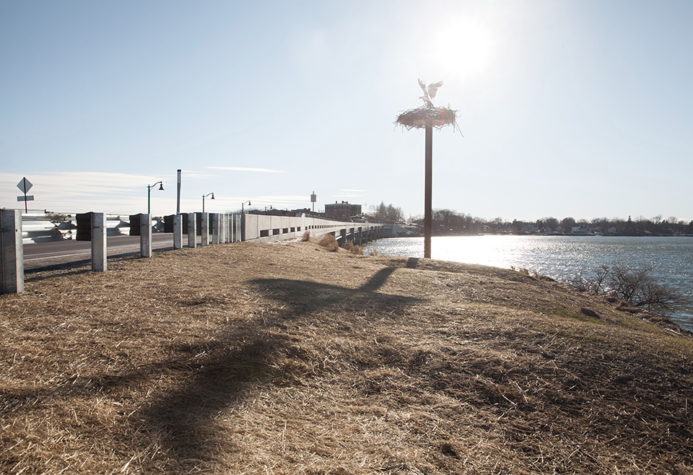 While crossing the Martin’s Point Bridge, which connects Falmouth and Portland over the Presumpscot River, drivers, walkers, and cyclists get a view out to Casco Bay and Mackworth Island. But if they look up, they also get a glimpse of Wendy Klemperer’s sculpture, Osprey Landing. The steel work of art is eight feet in diameter, twenty feet tall, and weighs in at over a ton, but the bird is light and agile as it is dramatically suspended in air, returning to its nest.

“I wanted a bird that was characteristic of Maine. The Osprey’s dynamic size and shape really struck me,” says Klemperer. Klemperer originally created the sculpture for a show at Maine Audubon. The art remained on display there until, with the guidance of art consultant June LaCombe, the public advisory committee of the Martin’s Point Bridge project decided it would make for a beautiful addition to the new structure. They also commissioned Klemperer to build a nest for the bird.

While construction for the new bridge was still underway, Klemperer loaded salvaged rebar from the former, demolished roadway into her pickup truck and brought it to her studio, where she used it to create a giant home for her osprey. In October 2014, Klemperer, along with workers from the bridge, installed the sculpture along the water.

“The osprey have made such a wonderful comeback, and they are very symbolic of the thriving wildlife in Maine,” says Klemperer. With river views open to drivers on both sides of bridge, she notes that, “They also epitomize that connection with the water that Maine has.”