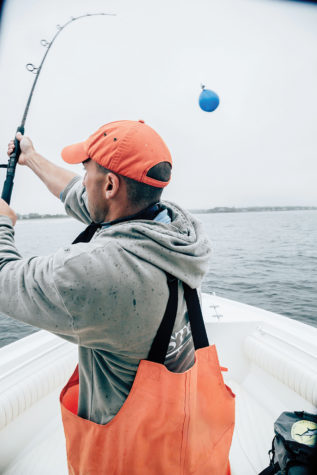 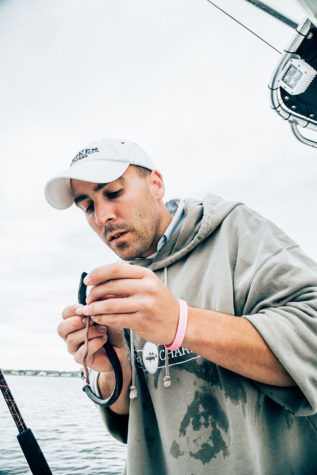 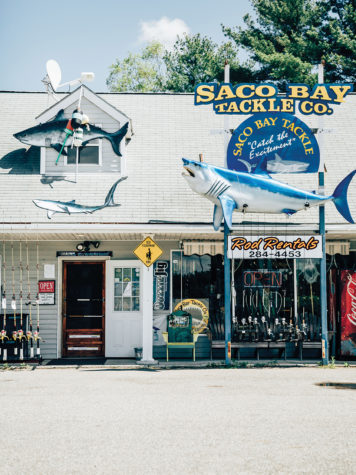 Saco Bay Tackle Co. is a headquarters for striper tackle and fishing info 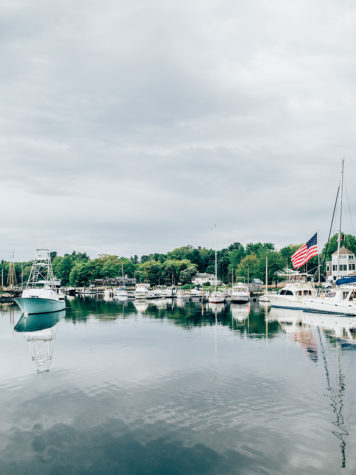 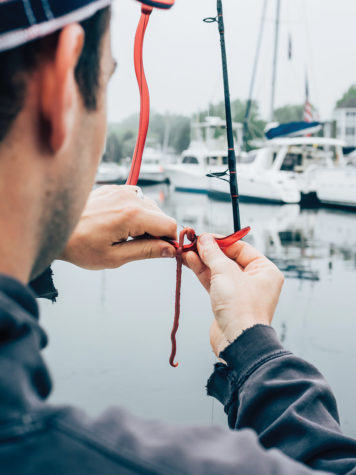 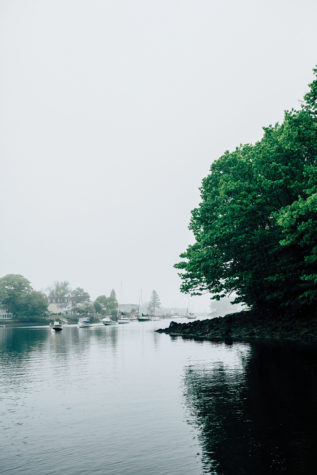 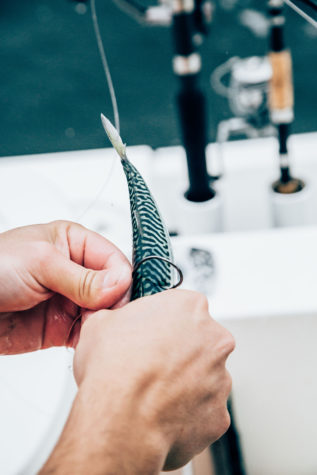 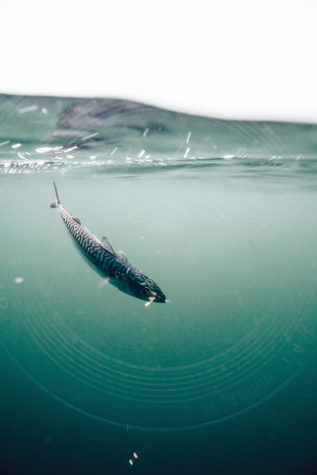 Catching atlantic mackerel to use for bait 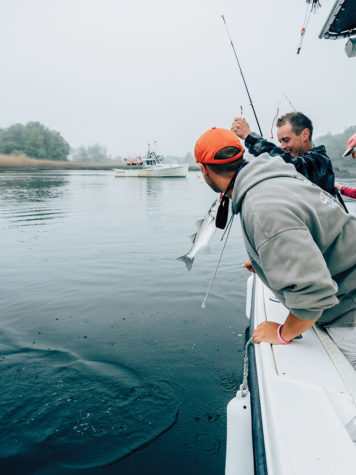 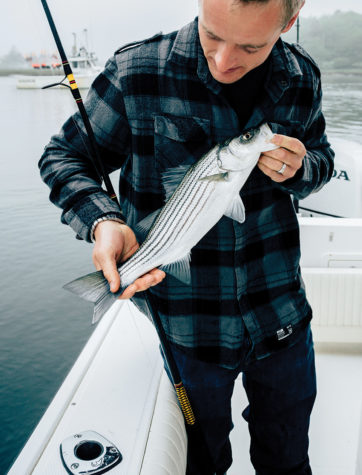 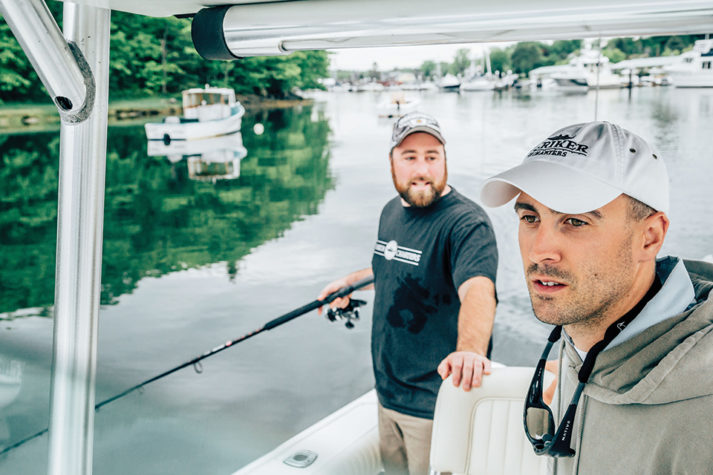 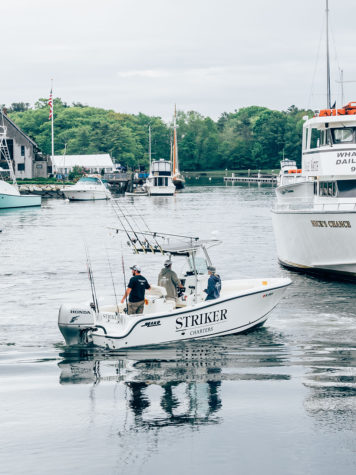 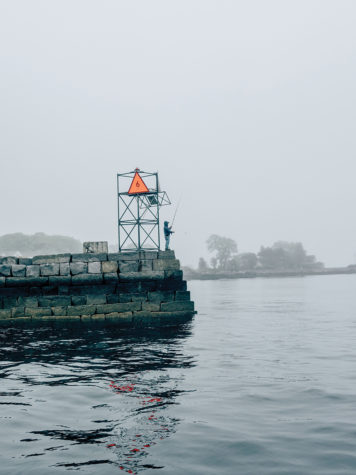 Striper fisherman off the entry to Kennebunk River 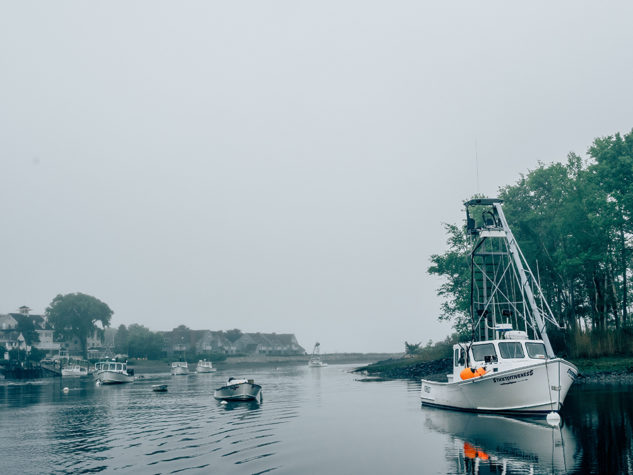 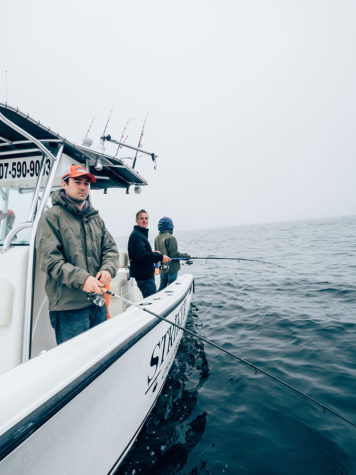 Nate Paradis and Sheldon Pope put out some lines 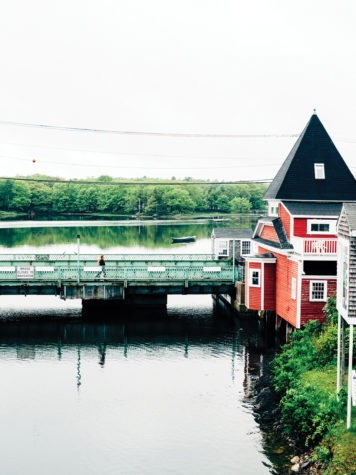 Bridge over the Kennebunk River

The summer fishing season is warming up. A local captain and his friends test the waters on the Kennebunkport-based charter boat Striker.

Sometimes they’re still “numb in the head” in the chilly seawater. Schools of striped bass, better known as stripers, are the fish that Captain Ben Welch is talking about.

Even as Kennebunkport is looking and feeling summery during this first week of June, water temperatures are still in the low 50s in the Kennebunk River. Fishermen are reporting that the stripers have begun to swim into Maine’s coastal rivers to spawn, but it may be a week or two before a big catch is possible. These wild, native fish can be slower to strike this time of year, Welch says, especially after a cold winter, a real winter with a later snow melt. Then again, the fishing could be really good. There’s only one way to find out.

The boat that Welch captains for Striker Charters is docked for the season alongside the Boathouse Waterfront Hotel in Kennebunkport’s Dock Square. The day we meet, three other local men—who have all worked on lobster boats and get the fishing itch this time of year—are heading out with Welch too. The young boat captain from Arundel grew up cruising on this river in aluminum boats to fish for striper and bluefish. He knows well these ocean-edged rivers where the fresh and saltwater mixes with the tides, and he says stripers can be caught in the Kennebunk River and Saco River and along the near shore from late spring to late summer.

The plan is to try some fishing before the night’s dinner parties. The Kennebunkport Festival has begun, and the hours of daylight are stretching longer each day. From the David’s KPT restaurant deck it seems like you could reach out and touch the Clam Shack and the Taintown Bridge. A stylish crowd is in town for this annual summer kick-off full of food, art, wine, and music. On another day here, everyone’s drinking tall glasses of ice and deep red sangria, and we overhear the waiter casually mention that some of the Bush family had stopped in for lunch hours before. (The presidential family’s famous compound, Walker’s Point, is an easy two- mile drive away on Ocean Avenue.)

It’s just before 7 a.m. when I follow the dock past that dining deck to meet on the Striker, a gleaming new 23-foot boat with a center console and the four men already aboard. Welch figures he was about five years old the first time he went fishing. He tells us about it while we begin to cruise slowly down the Kennebunk River toward the ocean. He was fishing with his grandfather on a pond in North Berwick when the fish struck. For some reason, as he felt the pull on the line, his childish imagination led him to think that he might reel in a large animal, maybe a beaver. At his first sight of the fish, he realized what he’d really caught was a whopper of a bass that weighed over four pounds. He can laugh at the story now, and he considers that day a great memory and the start of something. Ever since, he’s wanted to “get out there for the next big thing.”

Welch works on construction teams with Thomas & Lord, a builder in Kennebunkport, and he and owner Kevin Lord have been fishing together for a decade. One day, returning from an offshore trip fishing for bluefin tuna, the friends noticed a young man on Government Wharf on the Kennebunk River, where fishermen bring in their big catches to weigh-in. The man was trying to fish with the wrong equipment, and it looked like he’d snagged his hook on the mooring of a boat nearby. Welch and Lord still had live mackerel onboard—the bait of choice for catching striper—and they lent him a good rod and showed him how to use it. Within minutes, the guy caught his first striper, Welch says, and a few people gathered around to watch. “He was about 20 years old, but the look on his face was like a five-year-old on Christmas morning.” With that, Welch knew he’d like to be a captain and fishing guide. When the Boathouse Waterfront Hotel opened in 2013 and had marina space for a fishing charter boat, Welch and Lord jumped at the chance to found Striker Charters.

Now, this is a different view. Until this trip I’d only ever seen Kennebunkport from shore. The Kennebunk River is teeming with boats at docks and moorings on either side of the channel—everything from skiffs to yachts to sport-fishing boats with tall lookout towers. Shingled gray houses on the shore blend with the day’s early fog.

It’s an easygoing fishing party. Welch and Nate Paradis both graduated from Biddeford High School in 2005 and have gone fishing and hunting together for years.

Cody Griffith also works in construction and has a lobstering background. He often assists Welch on Striker Charters’s trips. Sheldon Pope owns his own lobster boat, the Hard Shell, out of Biddeford Pool. A couple summers ago, Pope went on an offshore trip with Griffith and Welch and caught a huge tuna that weighed in at 788 pounds and was 118 inches long from tip to tail. Paradis missed that trip because he opted to skip the fishing and go to the beach. The guys don’t let him forget that. Paradis has a good story, too, though, of an ice fishing tournament on Moosehead Lake that his team won by catching a 10-pound brown trout.

In case we catch one of keeping size, Welch explains his favorite way to make a meal of delicious fresh striper. He soaks each fillet in milk, seasons it with salt and pepper, and cooks it on the grill. For a sandwich, he adds mayonnaise and horseradish. If the fish aren’t biting, he’ll end a day on the charter boat by getting dinner at David’s KPT or the laid-back Alisson’s, the restaurant and pub on Dock Square that’s been a gathering place in Kennebunkport since the early 1970s.

The fish stories continue, even as the fish-catching goes slowly. The men talk of the days when the striper are feisty and hungry and churn in the water. Sometimes they even accidentally hook a striper by the tail, Welch says. “Now that’s a fight. You’ll think you have a 40- or 50-pound fish.” To see photographs of those kinds of catches, they recommend stopping by their favorite place for bait and gear, Saco Bay Tackle Company on Route 1 in Saco. The shop specializes in striper fishing supplies. (I stop in later to shop and check out the walls covered in snapshot pictures of smiling fishermen-women, and plenty of kids with their catches.)

In order to fish for Maine striper, first we need to fish for bait. Welch and the other guys outfit the poles with sabiki rigs with a weight on the end and a string of tiny hooks and fly-type lures. We’re all watching the surface of the water. “I wish we’d see herring,” one of the men says. “They look like diamonds in the water.” The idea is to be able to catch multiple bait fish at once from a passing school. This works pretty well, and we soon bring in several mackerel, pollock, and cunner (a perch-like fish). All of these bait fish are under a foot long, and the guys put them in buckets or start cutting them into chunks.

“This is a sit and wait game now,” says Welch, while Griffith puts the fresh bait on hooks and tosses some out as chum on top of the water. We’re trying to attract hungry stripers to follow our boat and lines as the boat putters up and down the Kennebunk River and out along the shore.

Our first striper hit happens before 8:30 a.m. right in the Kennebunk River. The high tide is rushing out and the current is strong when Pope reels in a pretty little striper about 16 inches long. The guys call it a “schoolie,” and release it quickly. (“Keepers” are between 20-26 inches or over 40 inches; a mature striper can grow up to four feet long and more than 30 pounds.) Its stripes are unmistakable on a long lean body that’s so white it glistens in a near-metallic sheen. No matter the size, I’m impressed. It’s always amazing to me that in water so vast—the Atlantic Ocean no less—a specific kind of wild fish can be found and caught.

Striped bass are prized by New England fishermen because they are known to give a good fight when hooked. Throughout the day, we try different baits, fishing spots, gear, and tactics. Welch has brought rubber lures that resemble glass eels, large balloon bobbers, and long, squirming bloodworms nestled in tangles of seaweed. We make use of them all.

On the fish finder near the captain’s wheel, glowing formations tell us the fish are moving below. We set anchor, kill the motor, and see the waves roll in, fringed with white foam as the boat rocks in the surf. At one point, above us as we cast is the stone bell tower of St. Ann’s Episcopal Church, situated on high land fit for a lighthouse. Throughout the morning and into the afternoon we cruise along, fishing in sight of Colony Beach, Parsons Beach, and Kennebunk Beach, and making our way down toward the mouth of Mousam River and the Rachel Carson National Wildlife Refuge. We see other fishermen-women on the jetties, and some who are wading into the surf.

Since he works in building and remodeling, Welch is familiar with many of the houses on the waterfront. He scans the shoreline as we fish, and he frequently points out houses that have been job sites. He’s seen the ocean from many of these yards and windows, and he says that even when the fishing is poor, he’d much rather work on the Striker. “Any day I get to do that, it feels like a miracle that we’re on the water. I can’t ask for anything better than doing something you love.”

It’s been a good day in the salt air and the sunshine returns just as we motor back to the dock in the afternoon. The town is buzzing with people now, and the large white tents are set up across the river for the Kennebunkport Festival’s big gala.

After we say farewells and I gather my gear and jump off the boat, I realize something. If you fish in Kennebunkport during the festival, there’s a moment when you’re walking up the dock from a day on the water and you’re still wearing a ponytail, knee- high rubber boots, and a sweatshirt. All around, other visitors are decked out, with glossy hair and party attire—Euro-style sunglasses, summer dresses, and wedge sandals. I’m ready to get cleaned up at the hotel and return to join the sparkling scene. People are relishing the warmth and sunlight, tasting clams and lobster claws on ice, while rosé is being poured. It’s a classic June afternoon in Kennebunkport, with summer kissing the air, and more striped bass from the sea surely to be running soon.