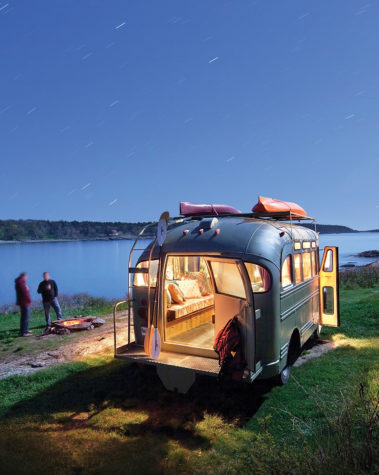 In the dense forests, out on the ocean or in the middle of a lake on a boat, lie on your back and look up—Maine’s night sky swarms with stars. This is no accident, the great efforts to preserve open land, coastal reserves, and woods and waterways have also resulted in some of the darkest skies on the East Coast. Now communities across the state are looking up with a mindfulness of light pollution—some going as far as to pass ordinances for conservation, and many are building awareness with annual star parties and festivals to celebrate the clear skies. Here are just a few examples of the innumerable lookouts to the spillway of galaxies that hang above.

The Emera Astronomy Center, located on the University of Maine Orono’s campus, serves the department of physics and astronomy, but is also open to the public for tours and star shows. The center replaced the Maynard F. Jordan Planetarium, built in 1954. The new center opened in 2014 with advanced equipment that allows for close-up views of the night sky, but the university also held onto the one-hundred-year-old Alvan Clark refractor, a relic from the former planetarium.

Mount Desert Island residents care about their night skies. In 2009 the Bar Harbor Conservation Commission passed an ordinance requiring all new businesses to use night-sky-friendly outdoor lighting to prevent further light pollution. Every summer on Cadillac Mountain the community celebrates the sky they preserve with the Acadia Night Sky Festival.

At this recreation area that stretches 100,000 acres from Baxter State Park’s eastern edge and includes the east branch of the Penobscot River, three lookouts have been carved out along the Katahdin Loop Road for visitors

to see Katahdin and, at night, the stars. With minimal artificial light, galaxies are visible without a telescope. Last summer, the park held its first Stars Over Katahdin event and campers learned about the constellations from an expert guide.

At the Southworth Planetarium in Portland learn about the night sky with classes, shows, lectures, and exhibits. The planetarium has a rotating monthly schedule that includes science and astronomy programs that range from family-friendly star shows to laser shows to animated dinosaur productions on the computerized dome. Constellations are projected on to the large dome and while it’s set to its current location in Portland, it can be adjusted to different hemispheres.

Cobscook Bay State Park is at the top right-hand corner of Maine, along Whiting Bay. Because of the low light pollution and public accommodations, the Downeast Amateur Astronomers’ Maine State Star Party, a gathering of amateur astronomers and professionals, has been held at this Washington County spot since 2006.

The Blueberry Pond Observatory in Pownal has been in operation since 1999. Arrive at the lookout for a two-hour tour and telescopes ready for use to spot Neptune and Uranus, nebulas and star clusters. After locating distant stars and notable constellations, visitors can digitally print photographs to take home.

Located on the Kennebunk-Lyman town line is this observatory organized by the Astronomical Society of Northern New England, a nonprofit, volunteer organization dedicated to teaching the public about astronomy. There are two telescopes for viewing galaxies and stars as well as the sun during the day.

Those who know Maine lakes understand the magic of a night spent lying on your back on a dock under the sky. To learn more about the dark sky over Washington Pond, Medomak Family Camp hosts an astronomy week each summer where they have guest speakers point out constellations and stars above. This year Sky and Telescope’s J. Kelly Beatty and telescope maker Bruce Berger will visit the camp in August.

At the Damariscotta River Association are miles of trails that trace the bay and wind through woods, but also traverse preserved open land with great horizon views. After the sun has set, stand in the middle of a field and the bright stars stretch across the dome of sky. This kind of access to night sky views is why the Central Maine Astronomical Society has set up a permanent base for stargazing. Throughout the year the society hosts star parties.