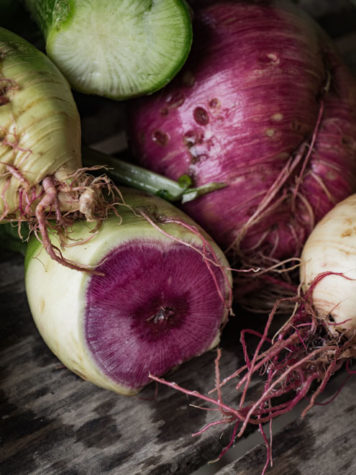 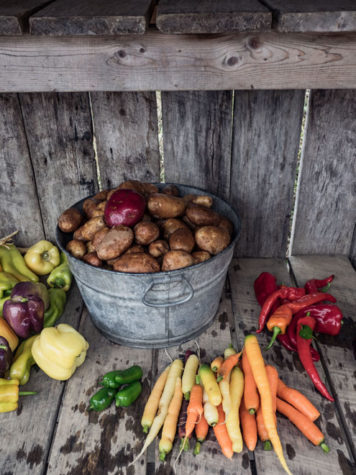 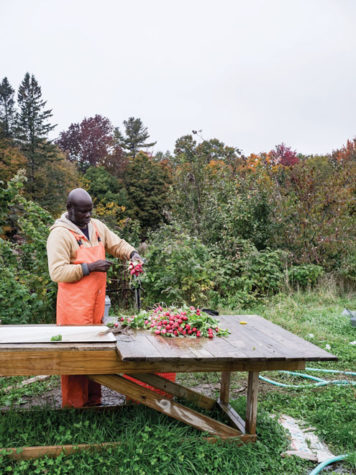 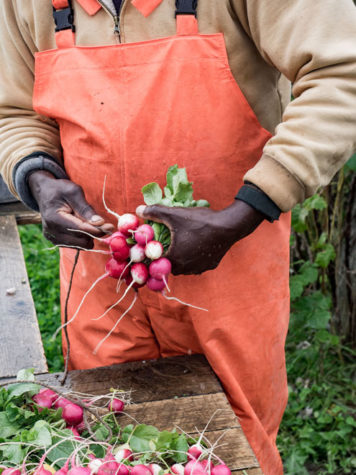 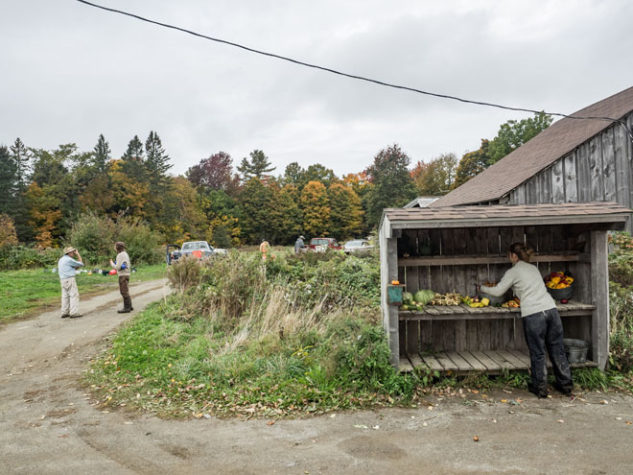 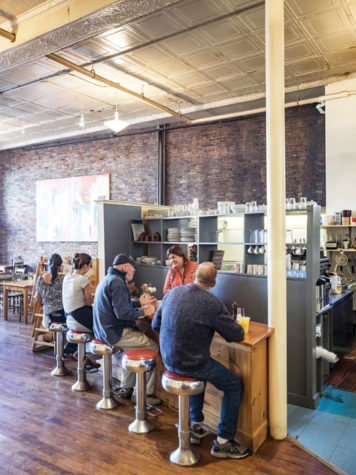 Saturday morning coffee at the Chase's Daily counter in Belfast. 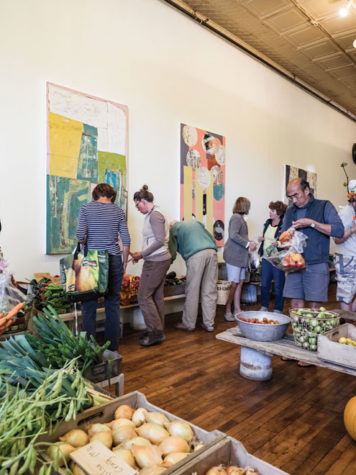 The day’s produce, herbs, and flowers are delivered mid-morning for use in the restaurant and sold directly to customers, farm-stand style. Art on the walls is changed frequently. On the walls is a show by Belfast-based artist Daniel Anselmi. 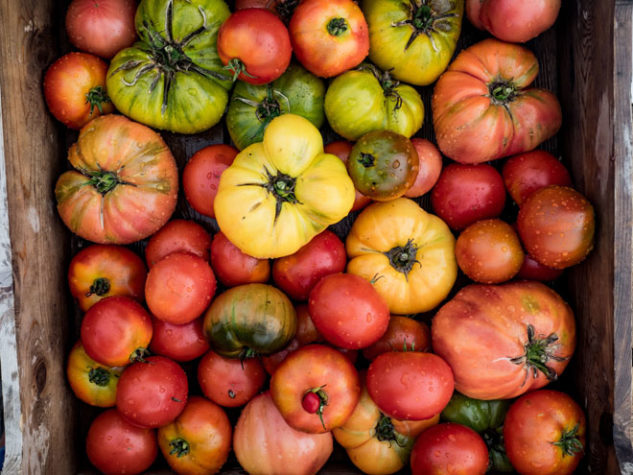 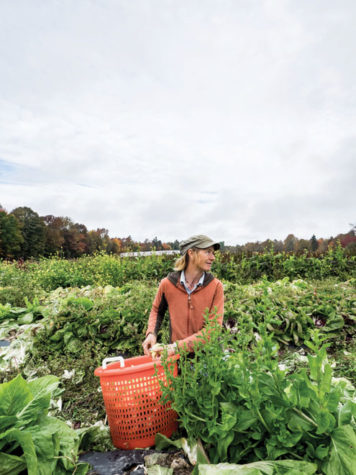 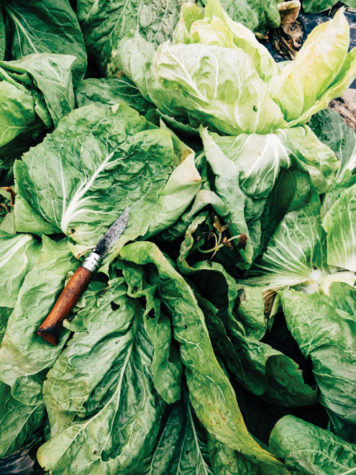 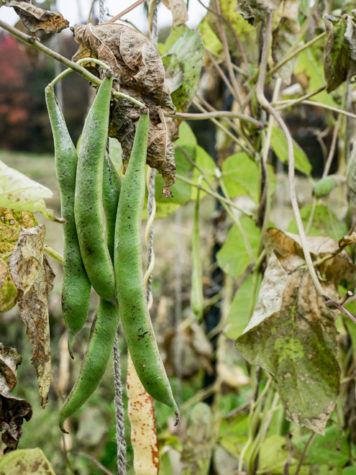 Banh mi, roasted fennel pizza, cherry tarts, and baguettes; just-picked bouquets of flowers and radishes tied with twine. From the fields of Freedom to downtown Belfast, since the summer of 2000 the Chase family has been growing, cooking, baking, and making art to create a truck farm phenomenon at Chase’s Daily

Addison Chase, lanky-limbed in a chambray shirt, tattered hat, and yellow mud boots, is returning from a field row carrying an armload of cauliflower. In the mist-heavy morning, every step looks purposeful. Megan Chase, one of Addison and his wife Penny’s two daughters, drives up the lane in a mud-splattered pickup truck and grabs a basket out of the truck bed. It’s 9 a.m. and Meg’s already been gathering for hours.

The first colors of fall are starting in the hardwood trees at the edge of fields still verdant with what the second-generation farmer describes as the “bounty mountain” of September. That includes multiple varieties of onions, beans and peppers, leafy stalks of Swiss chard standing tall on yellow and red stems, dark green and gold acorn squash, and bowling-ball-sized cabbage heads. Meg, with a knife in hand, looks toward the purple-black and deep-green rows of kale. “They taste especially good after a freeze,” she says with a matter-of- fact nod. This isn’t an occasion for long conversations or stopping to wax romantic about the beauty of what’s around them. On what’s apparently a typical morning at the Chase family’s farm in Freedom, Meg and Addison are joined by Penny and four other workers as everyone carefully selects and picks the produce, flowers, and herbs for their market and restaurant about 18 miles away in downtown Belfast. In a kitchen on Main Street there, Phoebe—the Chases’ other daughter—has been baking since about 3 a.m. The fruits of the family’s labors are the foundation for the ingredients, menu, and produce offered year-round at Chase’s Daily, which is at once a restaurant, bakery, gallery (fine art and curation are also in the family repertoire), and indoor produce stand.

For almost 16 years, it’s been a true farm- to-plate institution. At Chase’s Daily, recipes are concocted primarily from what’s grown on the farm. And while it’s not touted as a vegetarian restaurant, the menu does not include meat. The reason is a practical one: the Chases focus on growing vegetables, herbs, and flowers, and they haven’t raised livestock for years. Chase’s Daily is a landmark in the local-grown food scene of contemporary Belfast. The midcoast town of about 6,700 residents is also home to the Belfast Co-op, a large weekly farmer’s market, a series of art walks, the annual Maine Fare food festival, and the Maine Farmland Trust, as well as other local-focused eateries like the Gothic a few doors up Main Street.

In the winter months, farming duties slow for the family, and art and town life are even more in focus. “The building is so important to the Chase’s Daily equation. It’s a place to live, a studio, and the restaurant,” says Meg.

Open all seasons, in winter the kitchen makes use of the farm’s greenhouse lettuces, and the apples, dried beans, potatoes, winter squash, and root vegetables stored in the restaurant’s basement. Meanwhile, in the daylight- washed upper floors, Meg resumes her art; her painting subjects are often fields and flowers, filled with as much color as the farm’s landscape. Meg met her partner, Freddy LaFage, in the mid-1990s when they were students at the New York Studio School. Now the two live and paint at 96 Main Street in studios above the restaurant, and LaFage cooks at Chase’s Daily several days each week. (The family closes Chase’s Daily for two weeks in late winter each year for personal rest and to refresh the space with cleaning, repairs, and fresh paint.) The early-waking baker in the family, Phoebe, also resides in the building with soaring upper-floor windows overlooking downtown; Addison and Penny keep an apartment there, too. The individual backgrounds of the parents and grown daughters are in education and art.

“None of us has formal training in agriculture,” Penny admits. She and Addison decided to buy 500 acres of farmland in Freedom after careers in teaching—he taught physics, chemistry, and math at Waterville High School, and she taught in elementary schools. When their daughters were teenagers, the girls would sell the produce at local farm markets. Penny surmises that’s where Phoebe and Meg first learned the value of “marketing,” of washing the carrots and radishes well, and tying the bunches with twine. The sisters used scraps of wood to make handwritten signs. They created displays in galvanized tin buckets and wooden crates. The aesthetic of Chase’s Daily was being shaped.

When the Chase daughters left to study art and photography in college, Addison encouraged them to return each summer to help out on the farm in Freedom. From those experiences, the family began to visualize a more permanent business, Penny explains. “Phoebe wanted a place in Belfast for a small bakery that she might live above, and Meg thought it would be good to also sell a little produce.”

That’s how Chase’s Daily got its start. The family ended up buying a property much larger than they had imagined, the former Odd Fellows building at 96 Main Street, and they expanded their vision accordingly. The Chases made renovations and repairs— most notably creating the airy, 40-or-so- seat Chase’s Daily on the first floor, with its tall walls of wood and brick, pressed tin ceilings, and doors opening to both Main Street and Beaver Street. Along with the creative expressions of food, Meg Chase and LaFage curate shows for the Perimeter Gallery, which is housed in the same space and hosts art openings and new exhibits throughout the year. The contemporary works from Maine artists and beyond are often large-scale, sculptural, and conceptual. Some years, Meg Chase and LaFage have exhibited their own paintings.

Since opening in July of 2000, the restaurant has operated by particular Chase rhythms and rituals—a family meeting on Saturday afternoons for business decisions and menu planning; offerings of baked goods and coffee on weekdays; closing the farm on Sundays and the restaurant on Mondays; lunch six days a week and brunch on weekends; and dinner service only on Fridays.

Still, the most public ritual at Chase’s Daily is the arrival of the truck from the farm
on Tuesdays through Saturdays, spring through fall. Typically, a buzz of activity results. You can almost feel that the truck has arrived even if you haven’t seen it yet. Once parked alongside the porch at the Beaver Street entrance, the delivery truck’s rear door is rolled up to reveal the racks of just-picked and washed fruits, vegetables, and herbs, and staff emerge one by one from the kitchen and dining floor to help carry the wooden boxes, wire baskets, and galvanized tubs of produce to arrange inside. Meanwhile, customers are waiting and lingering—ready to inspect the tomatoes, leeks, celeriac, kohlrabi, or whatever else is ripe and ready.

Just past the large case of cheese wheels and wedges and the long counter of bakery goods is where customers pay for whatever array of cookies, breads, and produce they’ll be taking home. Mixed bouquets of flowers gathered by Penny and Meg and wrapped in kraft paper are also available, along with seasonal offerings like seedling plants and paperwhite bulbs. In the bustle of produce viewing and buying, the farm’s tender young lettuces are a star, and often sell out. “What I love about the mesclun is the surprise of whatever herbs are included. It’s always different,” a fellow customer says as she fills her bag with the just-cut mix of salad greens and edible flowers.

It’s another day, a Friday evening in Belfast, and many of the town’s long-established restaurants are open. The parking lot is full at the Dockside Family Restaurant for milk-based chowders, fried fish, and lobster rolls. The smell of sirloin steaks wafts across Main Street from Rollie’s, where there’s a full house. The docks and boats of Belfast Bay are just down the hill. At Delvino’s, the windows steam with the Italian cooking and conversation inside. At Darby’s, couples and groups of families and friends are gathering at least half the pub’s tables. And then there’s the massive, four- story building that’s home to Chase’s Daily. Windows on each floor are lit.

Since Friday is the only night each week that Chase’s Daily serves dinner, it’s a hot ticket. We arrive without reservations to the territory of the farmer-baker-artist- teacher-chef clan. Even though the dining room is nearly empty yet, the woman at the counter says, “I’ll see what we can do.”

Once we’re seated by the window, we’re feeling good that we arrived before 6 p.m. because the room of wooden tables and chairs soon fills. I see another hopeful couple arrive, scan the room, and request a table. “Not possible,” they’re told.

Meanwhile, we’re beginning with a bottle of light, mineral-y white wine (it’s lovely). Ashley Savage, one of the workers we met on the farm, happens to be our server, and she soon brings a bowl of warm olives with rosemary and orange peel. The bread is warm, too, presented in a clay flowerpot and served simply with olive oil and salt. LaFage is cooking in the kitchen and one of his paintings is above our heads on the wall as part of a just-opened show of his work. Meanwhile, Romy LaFage—Meg and Freddy’s 10-year-old daughter—chats with guests who call her by name and mention her family. Frequent customers are all around.

Next, we try the chunky minestrone in a flat bowl of gold-edged porcelain, and add a spoonful of the sage pesto from the bread plate. Tableware here is in elegantly mismatched shapes and patterns. Music with a South American rhythm plays from the speakers. We taste a Parisian-style salad of grated carrot, and the Indian plate with chickpeas, and falafel with a wonderful texture inside like creamy polenta. Some customers have reportedly eaten whole meals at Chase’s Daily without realizing it’s meat-free because the food is so satisfying. I understand. The flavors are full, bright, and delicious. I can taste all those fresh ingredient.

Odd Fellows
For several years now I’ve been stopping into Chase’s Daily whenever in Belfast—for a fruit tart and coffee, and maybe some fava beans, mixed salad greens, or tomatoes to take home. When I first learned the building’s “Odd Fellows” history, it immediately made sense to me. Like Belfast itself, there’s no chance of mistaking the commodious food-hall- bakery-and-art space that’s Chase’s Daily for any other place. A lasting family project, Chase’s Daily has an aura that’s the Chase family’s own and Belfast’s own—a truly out-of-the-ordinary combination of color and flavor, from the fields of Freedom to a midcoast Main Street. 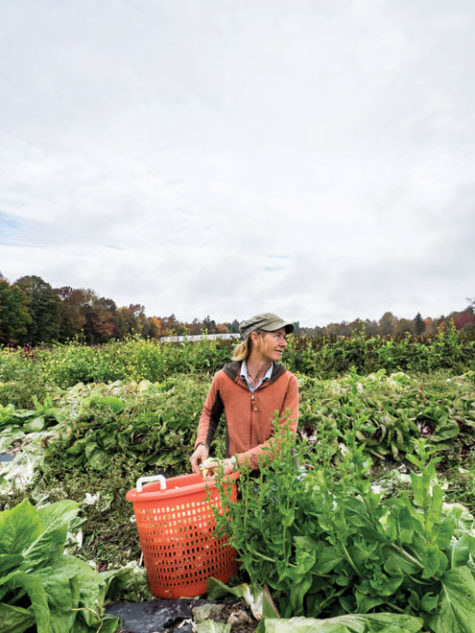 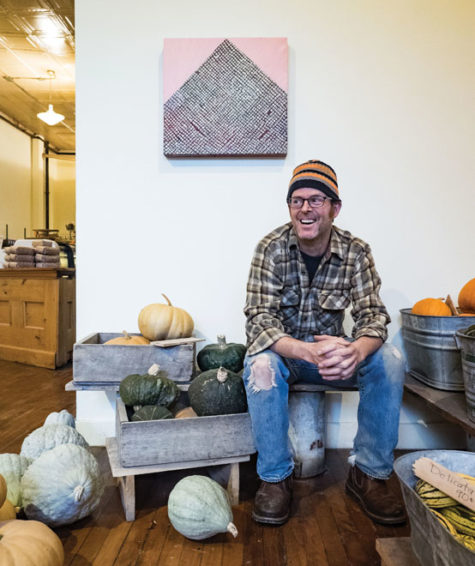 Freddy LaFage sits below one of his paintings. He cooks at Chase’s Daily several days each week. 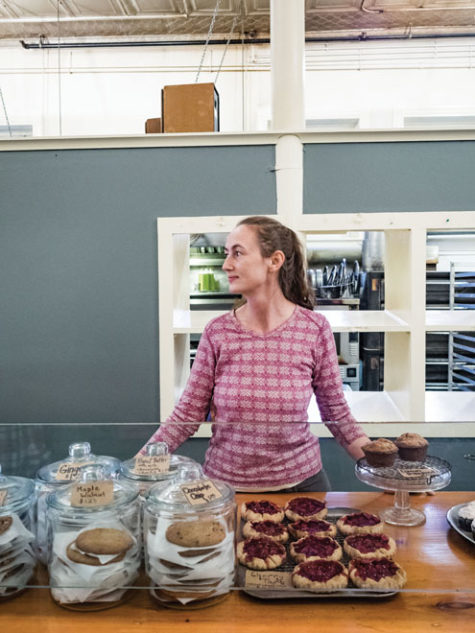 Phoebe Chase is the baker in the family. 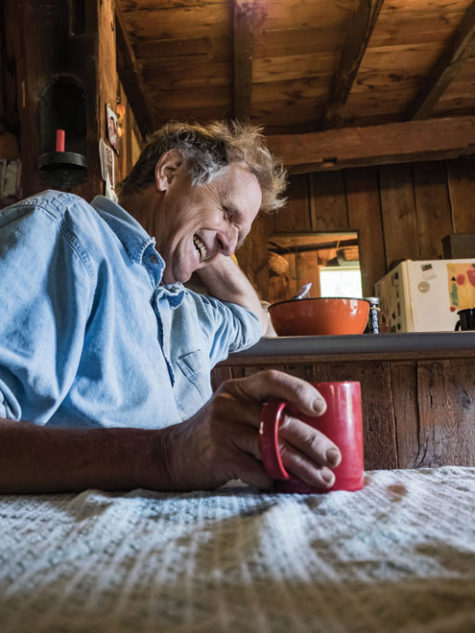 Addison Chase taught physics, chemistry, and math at Waterville High School before he and Penny built a house and began farming in Freedom with their two daughters. Together, they opened Chase’s Daily in Belfast in 2000. 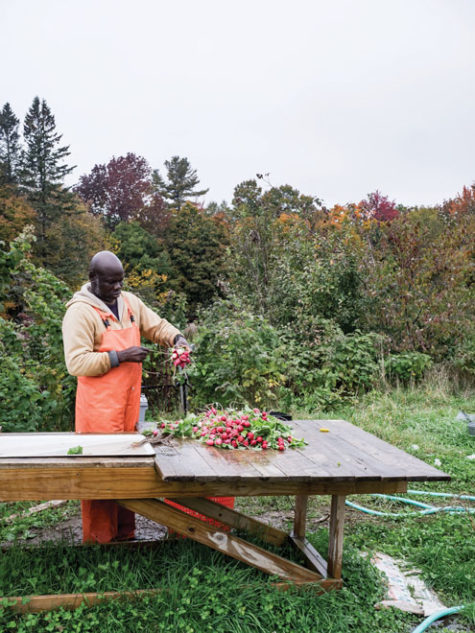