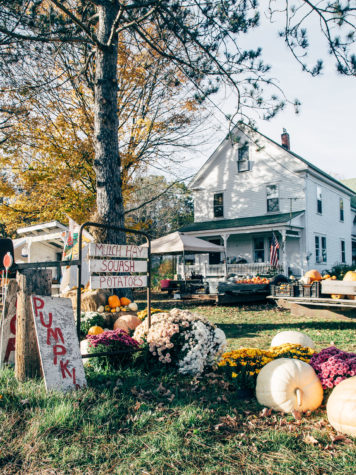 From corn mazes to pumpkin boat races, Maine offers a cornucopia of fun fall events for families of all ages.

This farm boasts an impressive farm stand with fresh corn, squash, potatoes, and other classic fall veggies. There’s also a pumpkin patch where families can pick out their future jack-o’-lanterns.

Open Saturdays and Sundays until October 28, this farm has a six-acre corn maze and offers a hayride to their pick-your-own pumpkin patch. There are also farm animals, a jumping pillow, and a corn launcher.

This haunted train ride through the Boothbay Railway Village gets scarier as the night goes on. Held on the evenings of October 26 and 27, the earlier rides are perfect for families and young children while later rides are aimed at older kids who don’t mind being spooked.

In addition to apple, pumpkin, and squash picking, this 42-acre farm offers hayrides and a pirate ship–shaped corn maze. On October 19, 20, 26, and 27 families can walk through the maze at night, then warm up by a fire with hot cider and doughnuts.

At this Halloween party hosted by the nonprofit Birth Roots, the littlest monsters—newborns to 36 months—don adorable costumes for some not-so-spooky fun. Held at the Italian Heritage Center in Portland on October 27, the event includes Halloween activities and treats.

Open weekends in October, this farm’s ten-acre corn maze is located next to a pumpkin patch, and visitors can be transported between the two by hayride. The farm also has a petting zoo, an obstacle course, and a moon bounce.

The Brick Store Museum’s fall walk, led and narrated by costumed hosts, takes families through Kennebunk’s Hope Cemetery to hear the tales of residents from the past three centuries. The October 28 tour is for both children and adults.

Held on Columbus Day weekend, this event features a parade, a pumpkin derby, a pumpkin catapult, giant pumpkin carvings, a zombie fun run, and a giant pumpkin smash. The main event comes Monday with the regatta, in which participants ride giant pumpkins through Damariscotta Harbor.