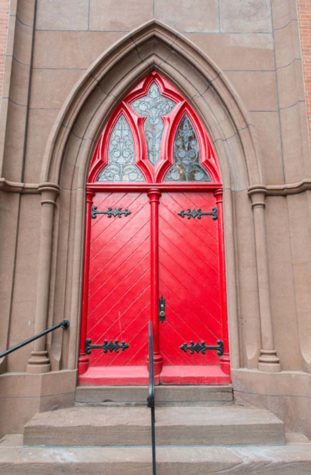 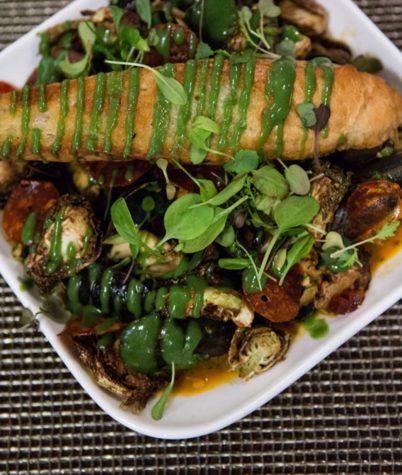 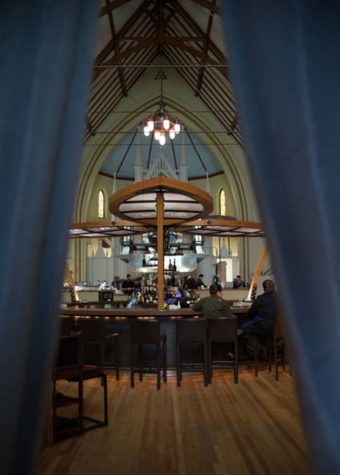 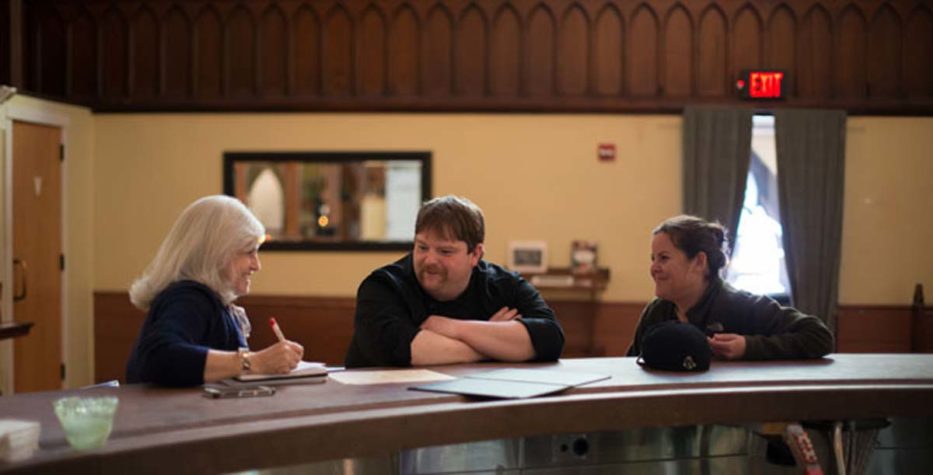 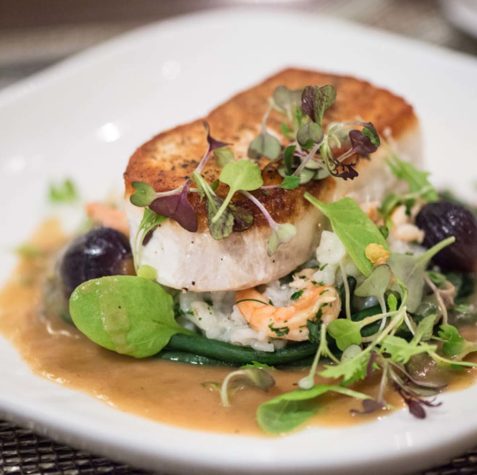 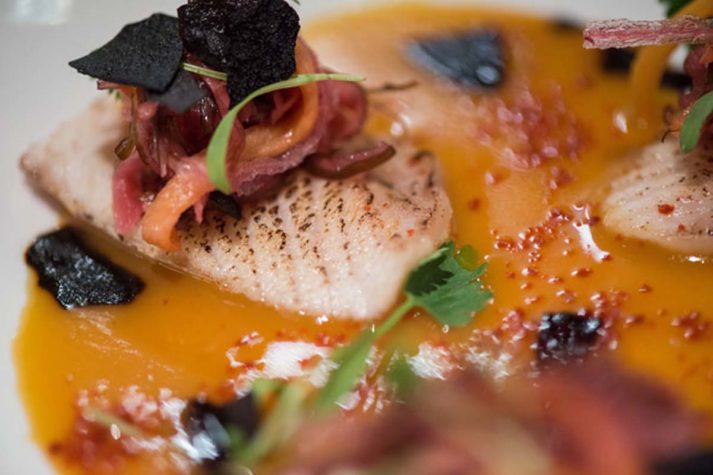 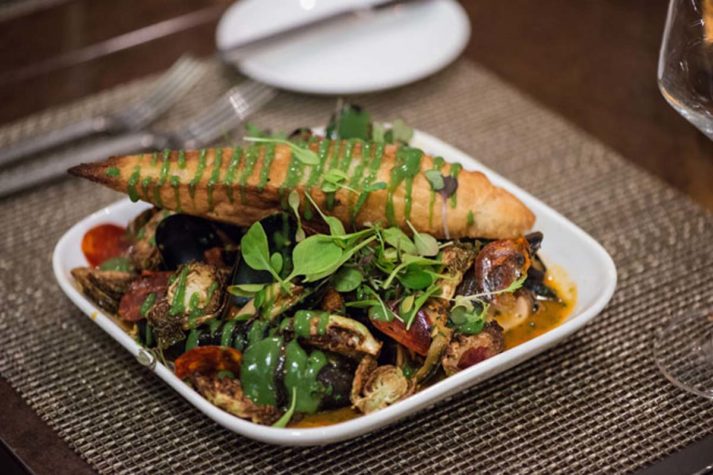 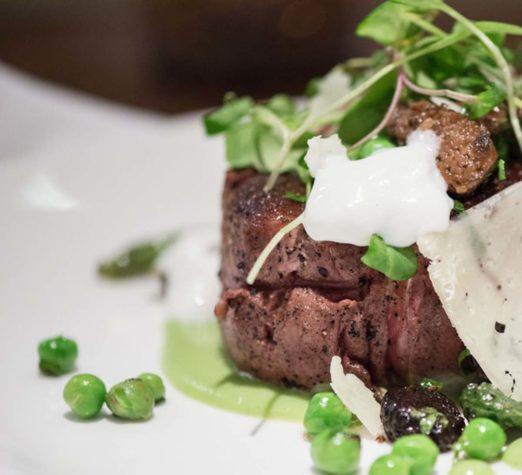 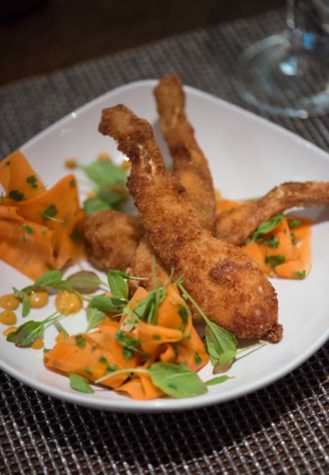 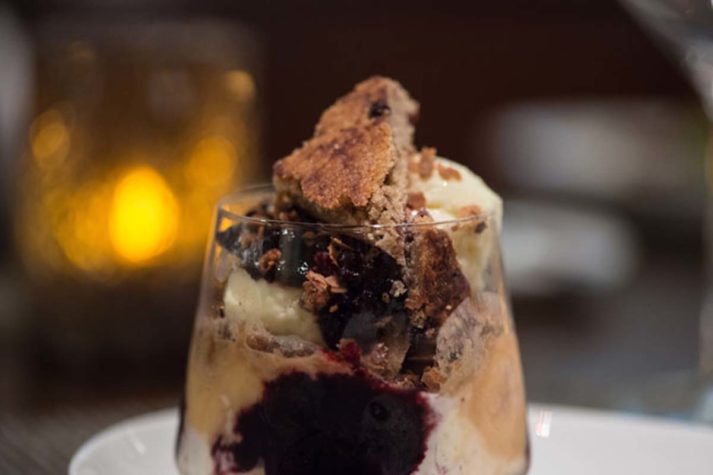 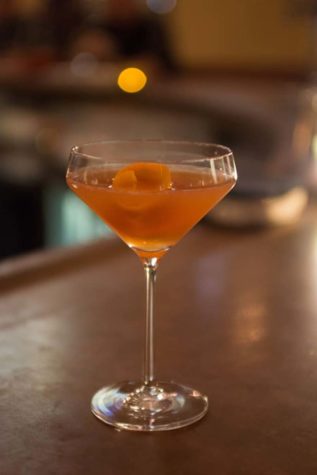 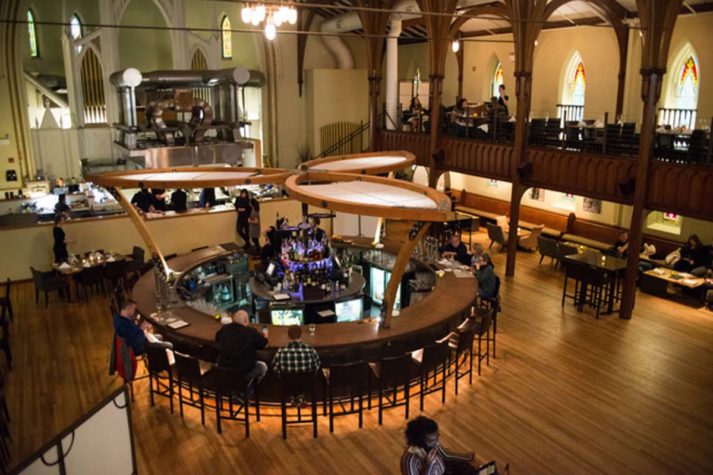 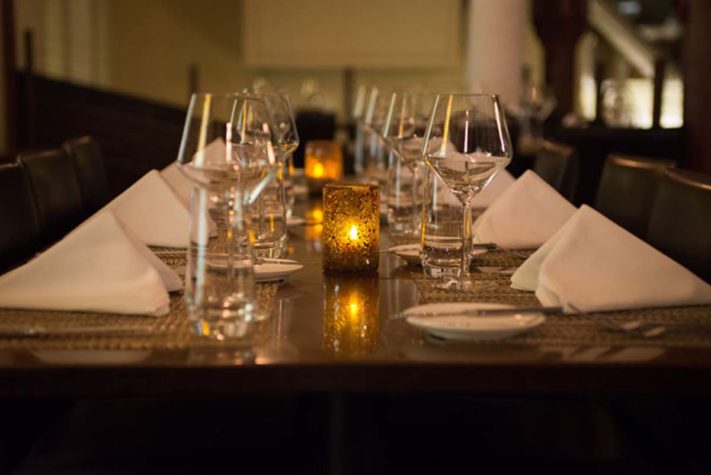 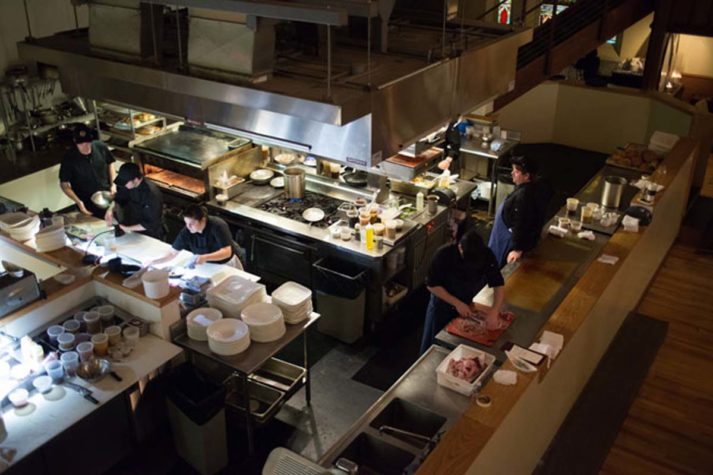 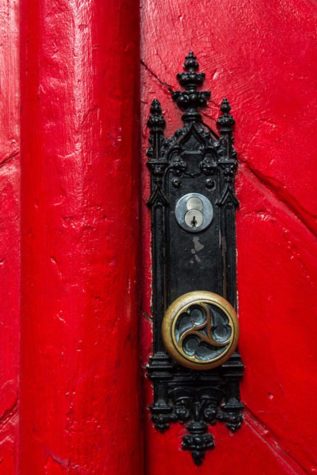 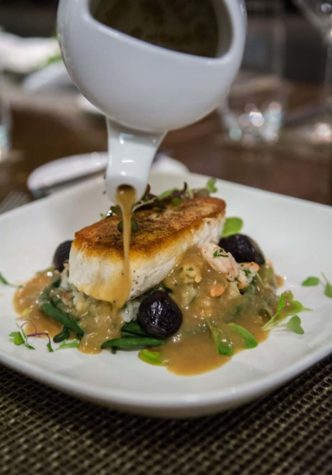 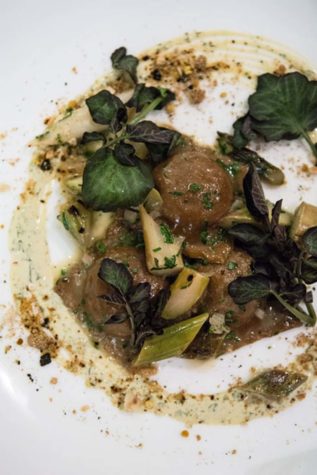 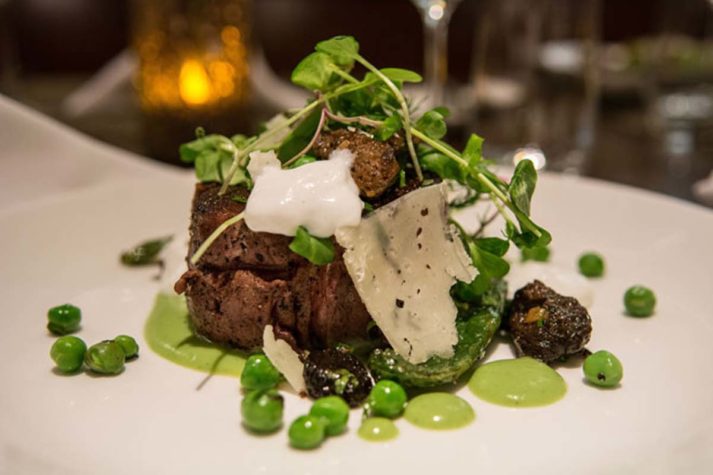 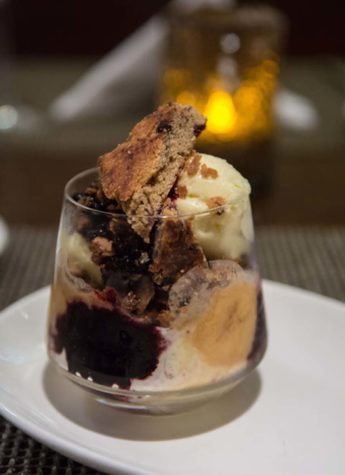 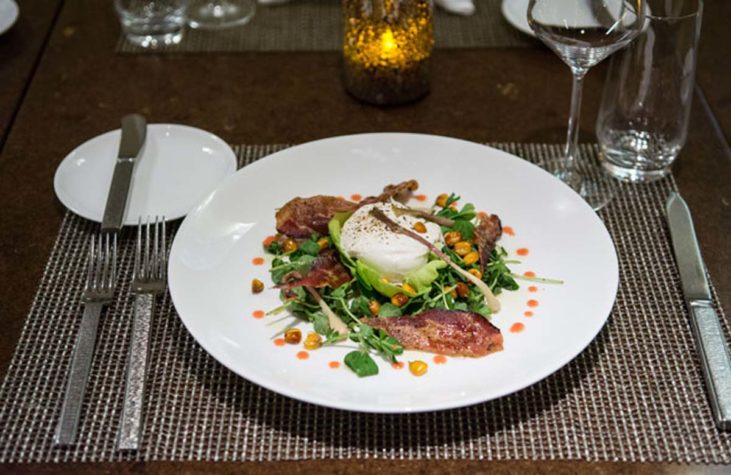 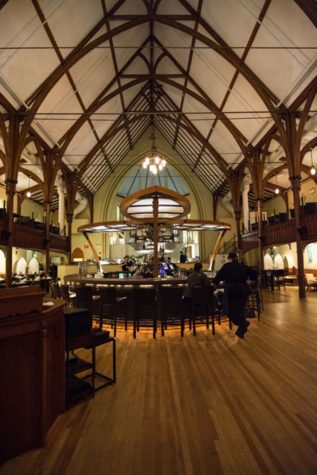 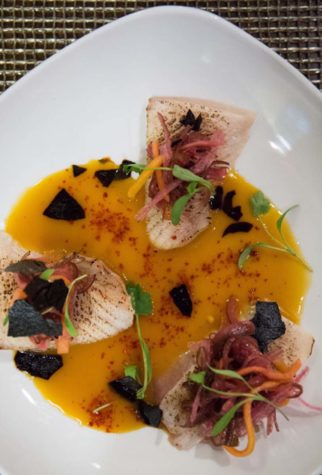 When Grace first opened its tall red doors in 2009 it was the hottest spot in town. The opening of the dramatically renovated Gothic Revival-style church on Chestnut Street had been eagerly anticipated and did not disappoint. There was nothing else like this in Maine. Owner Anne Verrill had transformed a dilapidated church into an exquisite setting for dining, drinking, and socializing. Surrounding the centerpiece round bar are soaring arches, slender pillars, and original stained glass windows that cast a magical glow on a sunny day. The effect is breathtaking.

The first chef to run the large open kitchen was well regarded, but perhaps “a little too cutting-edge,” admits Verrill, “and we became branded as a special occasion restaurant.” The second chef put out food that was more casual than what she had in mind. For the past two years, executive chef Adam Flood “has hit the exact mark of where we want to be,” she says. “His food is exciting but approachable.” Flood calls it “fun food,” and when I ask him to describe what that means, he tells me, “I like to take typical dishes, such as fried chicken, and use a high-end technique or ingredient.” The chicken is first cooked sous-vide in its own fat, sealing in all its own juices, then fried, making it “the juiciest piece of chicken you ever had,” explains the chef.

Flood brings a wealth of experience from restaurants such as Radius in Boston, the White Barn Inn in Kennebunk, Fore Street in Portland, and Earth in Kennebunkport. He picked up French and Italian techniques at all these places, but also brings his hints of his Southern upbringing to the menu. A starter of Bangs Island mussels brings a variety of influences into one generous dish; served in a lobster broth it contains Pernod, chorizo, and a big piece of grilled bread with garlic parsley rouille. Flood’s pea green and burrata salad is a delightful combination of textures and surprising flavors. The mild cheese plays well with the pickled ramps and bacon, and addictive house-made corn nuts add a salty crunch. Grilled rhubarb vinaigrette ties the plate together. “I like to char things for depth of flavor,” says Flood.

Flood also likes to grow his own herbs and flowers for garnish, plus unusual produce such as African blue basil and purple sweet potatoes. He and his father, who helps in the garden, peruse the Johnny’s Selected Seeds catalog together. “I like to grow obscure and expensive things so I don’t have to justify the cost to Anne. She has faith me,” says the chef with a smile. Verrill agrees, “I’ve never tasted anything of Flood’s that I haven’t liked.”

Flood’s bar snack menu is an appealing extension of his style, with dishes ranging from Reuben wontons to fried frogs’ legs with eastern North Carolina-style barbecue sauce. The always-popular Grace burger is the same one that’s been on the menu since the restaurant’s opening, and still just six dollars. You’ll find those crunchy corn nuts in the bar nuts mix along with roasted peanuts, crispy pork skin, and sambal. Grace’s bar is a stylish place to worship the cult of the cocktail. Mixed drinks have names like Holier Than Thou, Redemption, and Original Sin. Bartender Mike Vassallo mixes me a Halo, a new light and fruity drink for spring that is a heavenly blend of Sailor Jerry spiced rum, slightly bitter Aperol, Gran Marnier, grapefruit bitters, and other citrus.

In Grace’s eighth year, the restaurant has settled into its groove nicely. It’s a place where you can choose your own dining experience, whether by savoring a drink and snack at the bar or comfortable lounge area or enjoying dinner from the upper mezzanine with a view of the gorgeous as ever space. If you haven’t been lately, it’s time to go to church.