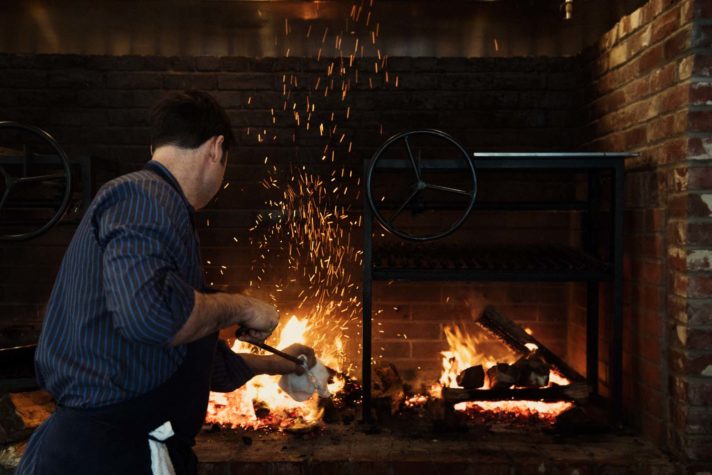 Chef Justin Walker says the heat distribution during cooking can fluctuate in a wood-fired hearth. 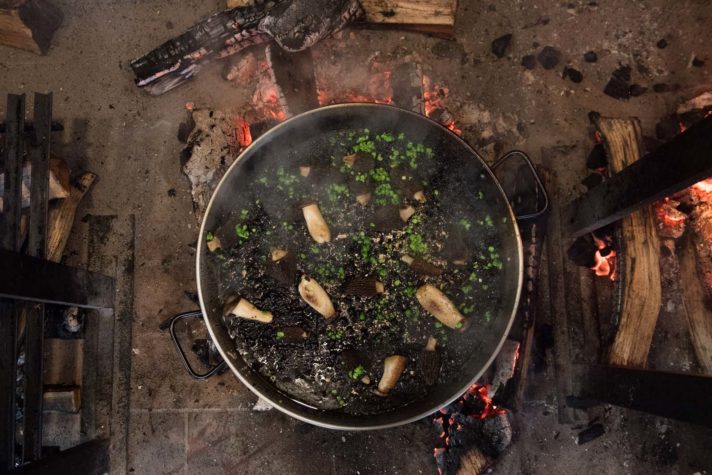 A simmering pot of paella, made with squid ink, crushed English peas, and morels from Tibbetts. 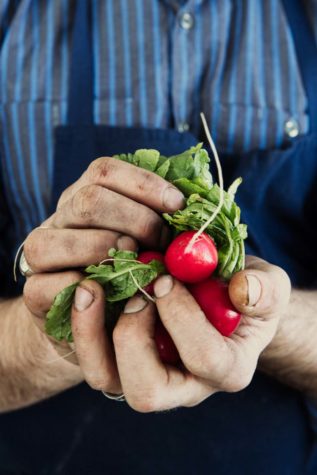 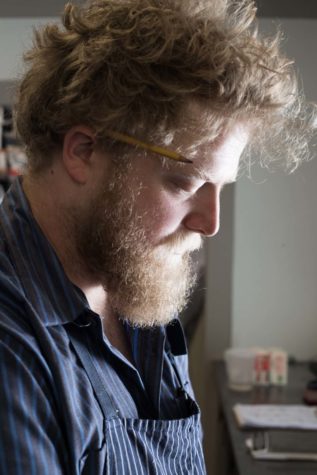 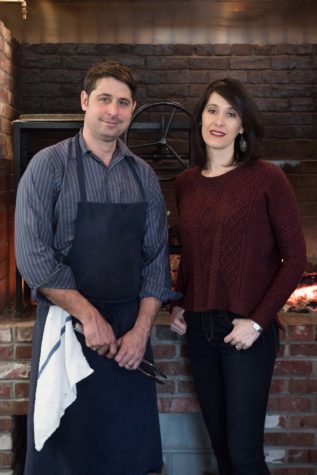 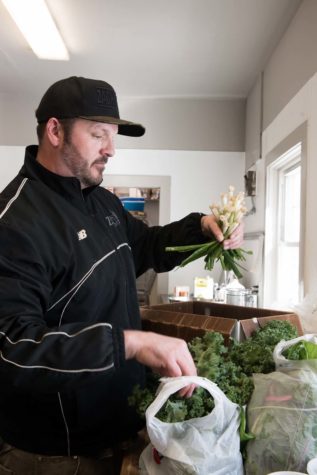 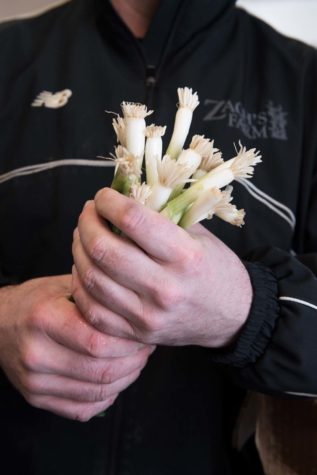 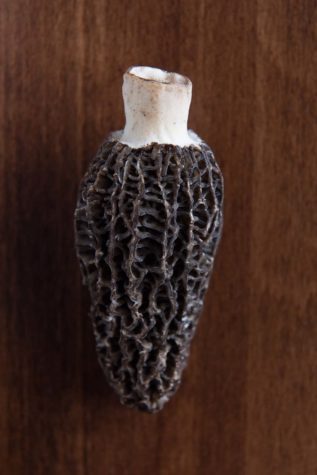 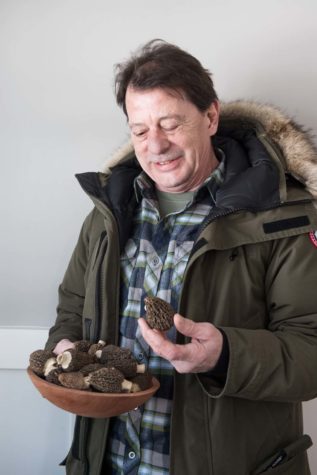 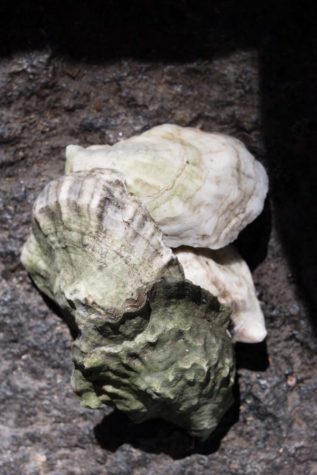 The shells of Nonesuch oysters differ depending upon their growing environment. 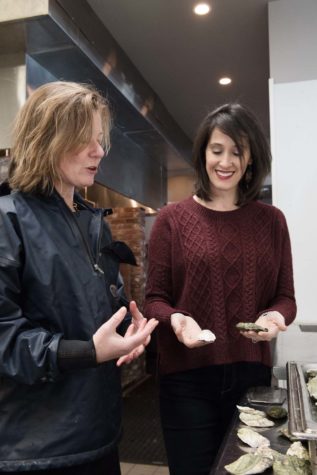 Culinary treasures from the state’s fields, woods, and waters at Walkers Maine

Walkers Maine in Cape Neddick has a homey feel. Chef Justin Walker tends the wood-fired hearth, feeding it kindling from a pile outside the back door. Baker Matt Jauck, also known as Powder, is in the kitchen preparing the evening’s desserts, his hands a blur of floury white. The bar is abuzz with murmurs from an after-work crowd. A fireplace provides warmth to counteract the April chill. In the center of the main dining room, a young couple seated on a couch raises their glasses in a birthday toast. “The restaurant design is inspired by the way we live,” says co-owner and manager Danielle Johnson Walker. The food at Walkers Maine is also a reflection of the life that Danielle and Justin are carefully cultivating. Whenever possible they use ingredients farmed, foraged, or fished by local purveyors—who are, more often than not, their friends and neighbors.

Justin and Danielle live in a 250-year-old farm- house four miles away. Known as Johnson Farm, the property has been in Danielle’s family for 120 years. The couple has been there since 2001. Their son, Jackson, is the sixth generation to live on the farm, and the twelfth generation to live in Cape Neddick. Their 15 acres keep the restaurant well provisioned. Depending upon the season, visitors to Walkers Maine en- joy the family’s heirloom tomatoes in summer salsas, homegrown decorative flowers in salads, and milk from their Nigerian dwarf goats in delicate but richly textured ice cream.

Although Walkers Maine is in its first year, Danielle and Justin have incorporated garden and farm-fresh elements into their meal preparation for decades. Justin, who was born in upstate New York, began working in restaurants at the age of 13. He trained at the New England Culinary Institute in Montpelier, Vermont. Justin and Danielle met at Arrows Restaurant in Ogunquit. This once-iconic Maine restaurant, which closed in 2014, was run by James Beard Award–winning chefs Mark Gaier and Clark Frasier and was known for its extensive gardens and farm-to-table cuisine. After 15 years at Arrows, Justin joined Earth at Hidden Pond in Kennebunkport as executive chef, and Danielle became general manager.

During that time, Danielle and Justin were revitalizing their homestead, which first came into the family through Danielle’s great-great-grandfather, Samuel Bowden. “Danielle was the driving force,” says Justin. “She really wanted to have horses there.” In 2004 one of their coworkers wanted fresh milk for cheese and asked if the Walkers would consider having a goat. When he left, the goat stayed. “It snowballed from there,” says Justin. Over time they added acres of organic garden plots, chickens, and bees. They now have 30 goats. “As a chef, you start realizing that it doesn’t start with a phone call with a purveyor sometimes,” says Justin. “For me it starts with the phone call to my hay supplier. The goats’ milk is better if the hay is better.”

“It is a labor of love,” says Danielle. “When you are in the field to feed the animals, there’s a sense of place that gets passed on that I don’t think you can get any way else… It does take some extra effort, but it’s so rewarding to know that we’re doing that.”

Abe Zacharias is the third generation to make a living on his family’s farm in York. Best friends with Walkers Maine bar manager Ben Foster, Zacharias has become an important supplier for the restaurant. During my visit to the restaurant today, he brings a box full of kale, Swiss chard, radishes, green onions, and baby arugula. “We take anything he gives us,” says Danielle.

Zacharias’s grandfather Dick Zacharias bought 260 acres on Birch Hill Road in 1977. He became known for his succulent summer berries. Zacharias’s father, John Zacharias, eventually grew tired of leaning over to harvest endless rows of strawberries. He planted corn instead, and found a ready market. “Our family has become known for our beautiful sweet corn,” says Zacharias, who graduated from York High School in 2006. After earning a degree in environmental planning and sustainable agriculture from Plymouth State University, Abe returned home to work for his father. “He was a great teacher,” Zacharias says of his father, who passed away in 2013 at the age of 65. “I thought I knew everything, but I quickly learned I didn’t. Every year you learn.”

Zacharias first focused on growing flowers (he still has ten acres of those), but he now has a broad range of produce. Peppers are a favorite—he grows up to 6,000 of these plants each year. “They take forever, but I really love it when the peppers come in,” says Zacharias. He has four hoop houses, including one that is heated during the winter months. In the fall he invites the community to the farm for a corn maze and pumpkin picking. He and his staff travel to five local farmers’ markets: in York and Kittery in Maine and in Portsmouth, Exeter, and Dover in New Hampshire. “I think it’s really great in all these communities that there is a push for locally grown goods,” says Zacharias. “I consider myself lucky that people are into it. We started at the farmers’ markets 20 years ago, and every single year it has gotten better.”

Zacharias takes pride in what he grows. He won’t sell corn if it was picked more than 12 hours earlier, because the taste changes when the natural sugar turns to starch. He is eager to help people understand the advantage of eating food straight from the source. “A vine-ripened cantaloupe is so much better, and a field-grown tomato in August or September doesn’t even com- pare to the ones you get in a supermarket.”

Danielle calls Rick Tibbetts the “foraging benchmark in Maine.” She lauds the Scar- borough native’s ability to find rarities such as wild asparagus. “What he does is almost unheard of,” says Danielle. “And he really appreciates what his ingredients turn into.” Today Tibbetts has brought a basket of morels to Walkers Maine. These much-sought- after mushrooms are known for their unique latticework caps and are considered a delicacy. “I try to find chefs who know how to use the things I bring them,” says Tibbetts, who also works with restaurants such as Fore Street and Hugo’s in Portland and with private chefs from as far away as Manhattan.

Tibbetts was previously a chef. He once worked with Dana Street at Street and Company in Portland. Early in his career, he left Maine to cook in California for ten years. While in Los Angeles, he picked morels in the San Bernardino Mountains and began to understand that this pastime might be of value. After returning to Maine, he stayed in the food-service business until he could no longer avoid the call of the wild. “I love to be in the woods,” says Tibbetts. “It’s hard to do that and run a restaurant at the same time.”

Tibbetts’s interest in foraging began 53 years ago. “My dad and I would go down a river in a canoe looking for fiddleheads. When I stepped in the mud it smelled like onions. Years later I realized I had been stepping on ramps.” Edible plants such as ramps, fiddleheads, and stinging nettles—and edible fungi such as morels, porcini, and chanterelles—each has its own harvest season and preferred habitat. Tibbetts has kept detailed records of his findings since 1988.

“One bad thing about this business is the travel. You may have to drive five hours, then hike three,” says Tibbetts. “I know the White Mountains like the back of my hand.” He avoids fields and woods near busy road- ways, which can be polluted by car exhaust. “I make sure areas are clean. Mushrooms are known soil remediators and absorb heavy metals,” says Tibbetts. “I see people picking chicken of woods [mushrooms] from trees near the highway. That doesn’t make sense.”

Tibbetts is aware of the need to protect natural resources. Overharvesting not only harms the plants and fungi but it also depletes reserves. “I have 20 places that I pick chanterelles,” says Tibbetts. “I pick the nicest 3 to 4 pounds at each spot from here to Canada, so at the end of the day 30 pounds won’t make a dent.”

Like Tibbetts, oyster farmer Abigail Carroll pays close attention to the environment. In 2014 the frigid temperatures caused by a polar vortex wiped out her business. A year later, she ran into a casually dressed man wearing a plaid shirt at a gas station. “I realized it was Justin and said, ‘I would love to get oysters to you again.’” He agreed with- out hesitation. Today at Walkers Maine, Carroll brings a small cooler filled with the gnarly-shelled bivalves. These were lifted from the chilled waters of the Nonesuch River near Scarborough. “We take them off the bottom and out of the gear to purge one to two weeks before we bring them to market,” says Carroll, detailing a technique she learned in France. Silt flowing down the river can get trapped in the oyster bags, she says. Putting them in cleaner surface water allows them to filter out larger particles. “We try not to have perfectionism get in the way of moving forward, but we do focus on the details.”

Carroll’s company, Nonesuch Oysters, now sells 10,000 to 15,000 oysters a week to high-end restaurants throughout the Northeast and as far south as Balthazar in New York City. “Every oyster is unique,” says Carroll. “They are not manufactured like Oreos—though they do have a surprise inside.” Although her oysters are all from the species Crassostrea virginica, which is native to the U.S. eastern sea- board, Carroll notes that the hardy, emerald-green-shelled Nonesuch oysters and the more delicate Abigail Pearls are subtly different. Each has a distinct taste, consistency, and brininess.

“This first happened unintentionally,” says Carroll of the two oyster varieties. “We tried to send a few to market and a customer called, asking if there was something wrong.” Carroll assured him that everything was fine and realized that she had a new product from simply changing the growing conditions. The Nonesuch oysters mature directly on the riverbed, while the Abigail Pearls are located in trays nearby. “Our oysters are a good example that every little thing we do sets off a chain reaction in nature.” 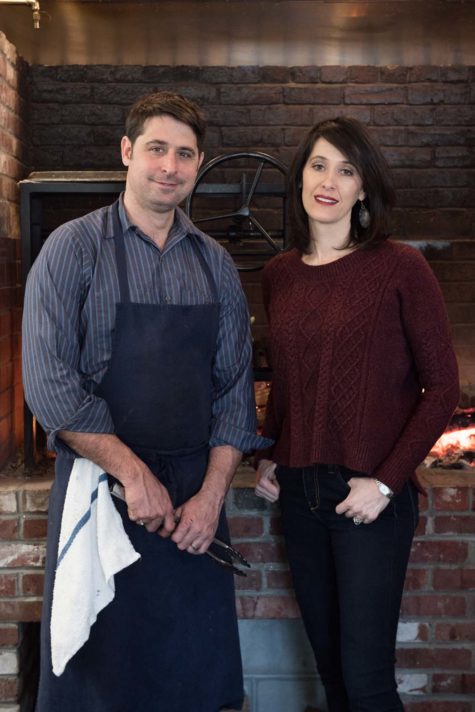 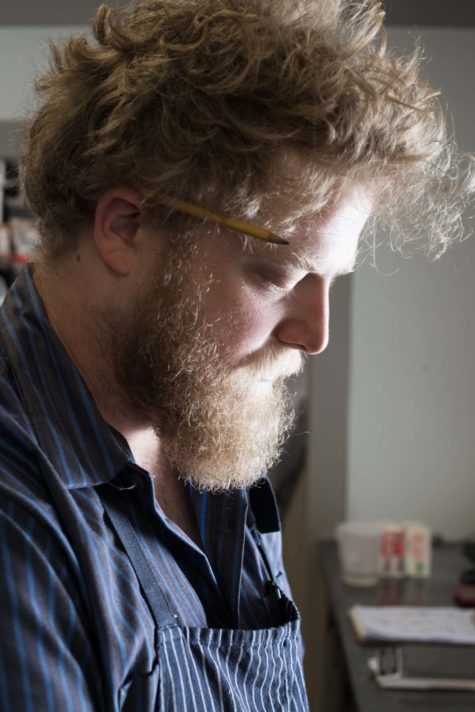 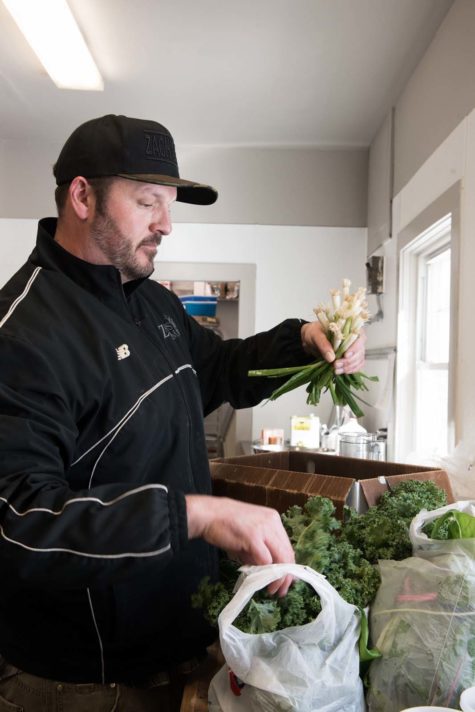 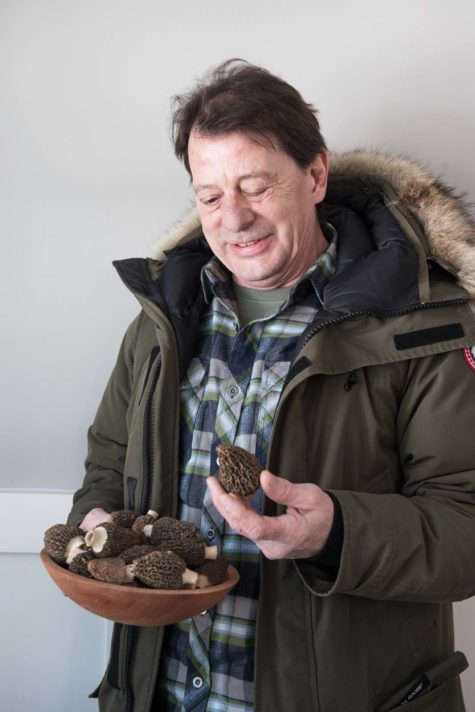 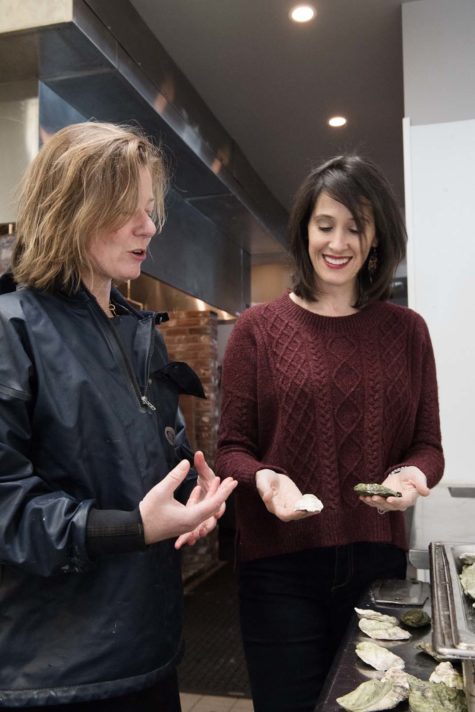