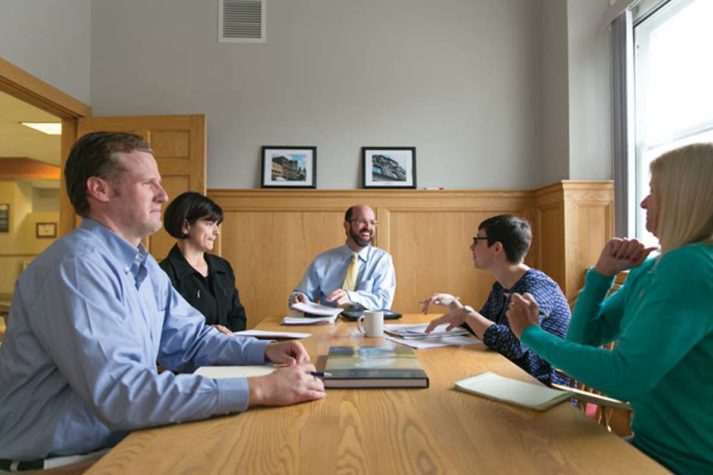 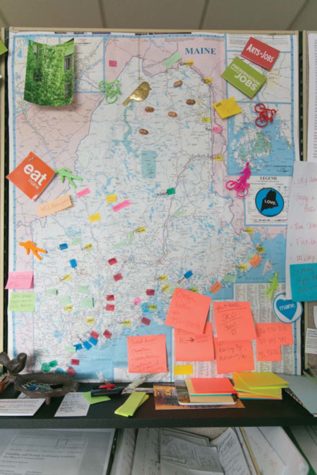 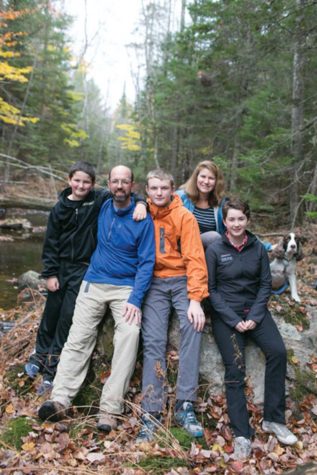 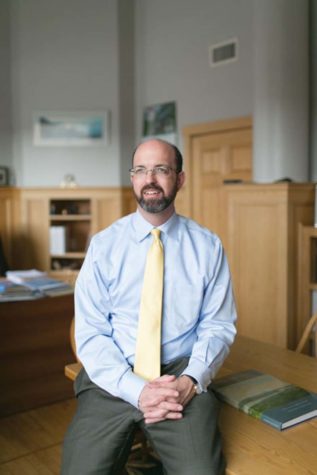 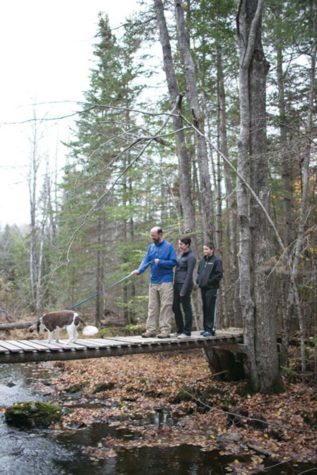 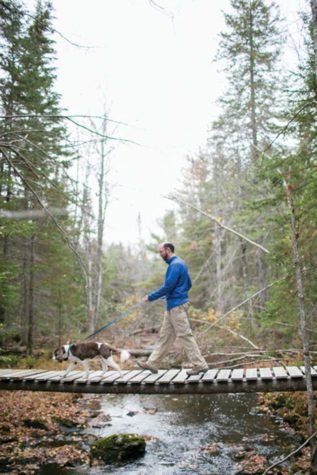 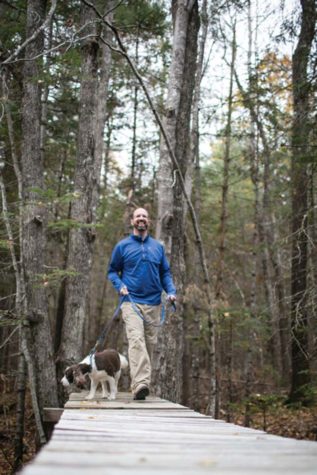 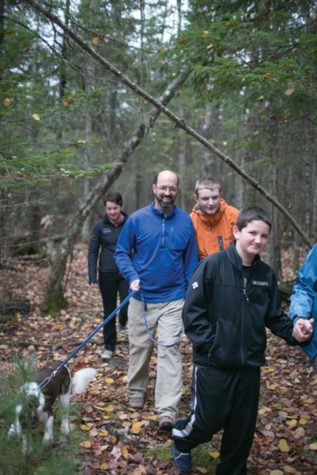 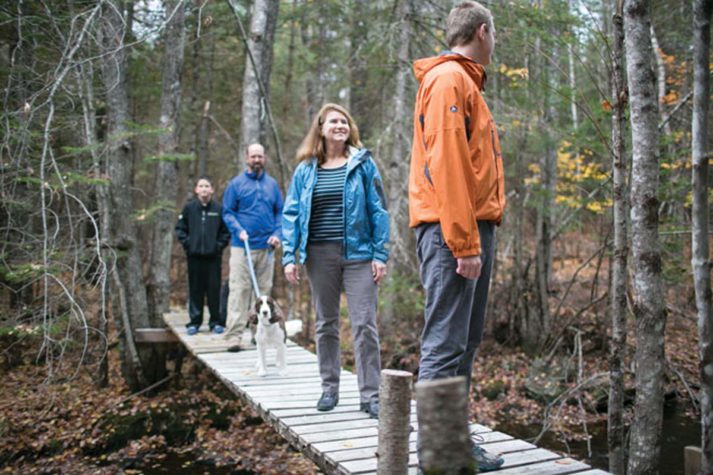 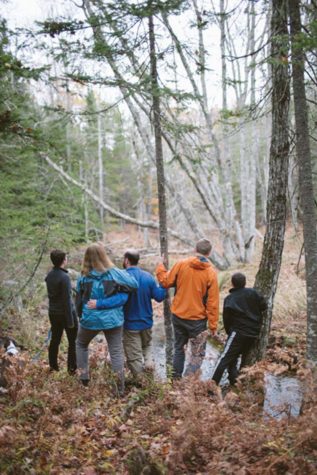 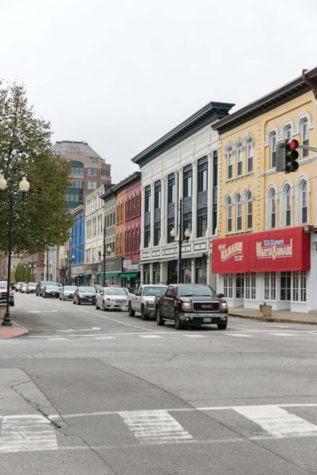 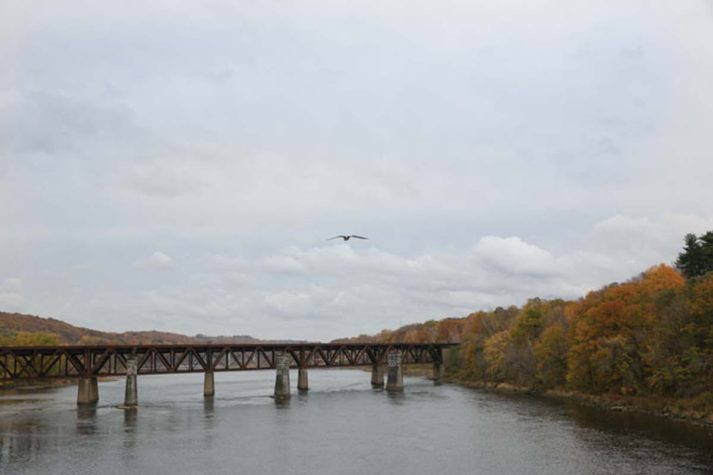 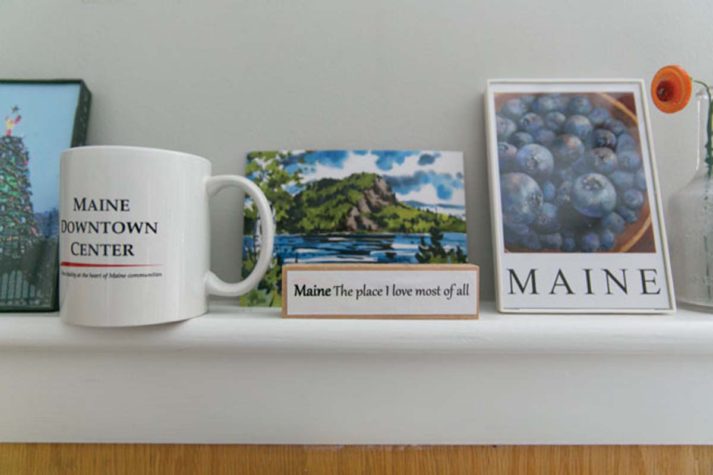 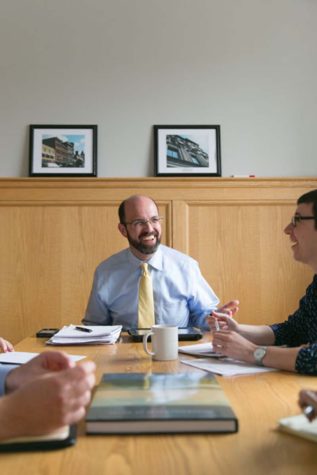 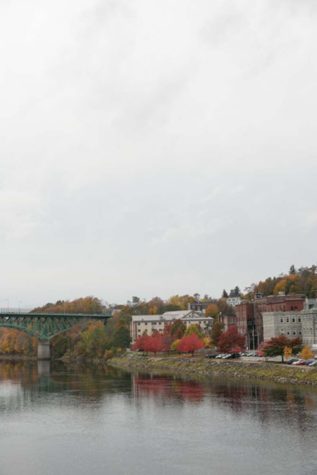 Maine Development Foundation President and CEO Yellow Light Breen gets down to work.

On the morning of our meeting at the Maine Development Foundation, newly minted president and CEO Yellow Light Breen bursts through the front door of the downtown Augusta suite at a clip, briefcase in hand, trench coat flapping behind him. When he sees me, he pauses, smiles. His voice is gentle, incongruous with the pace he picks right back up after we shake hands. I follow him into his office, which features a row of windows looking out over the Kennebec. When I comment on the view, he looks up and out as though noticing the river for the first time. “I rarely find myself looking at it,” he says, making his way to the closet to hang his coat. “In fact, I rarely find myself in my office.”

I’ve only just met him, but I could have told you that. Breen’s work at the Maine Development Foundation has him traveling all over the state all the time—to board meetings, mills, conferences, special events—and despite his earnest efforts, we had a difficult time nailing down a time to meet. After decades in leadership roles across both the public and private sectors, this dynamic Mainer is in high demand. His intelligence is obvious, but there is nothing flashy or pretentious in his demeanor. Over the course of our conversation he laughs a lot—especially at the beginning, when we discuss what it was like to grow up in rural Somerset County with the name Yellow Light.

Breen’s parents met in San Francisco’s Haight-Ashbury district in 1969, then joined the influx of back-to-the-landers moving to Maine in the early seventies, eventually settling on 100 acres in St. Albans to raise a family. Yellow Light Breen’s parents named him after a poem they wrote to commemorate his birth at dawn after a long week of rain. “There’s no question it was tough to grow up with that name,” says Breen, telling me of the teasing he endured from classmates and even the telephone operator when he’d call home collect to ask his parents to pick him up from practice after school. But in retrospect, he wouldn’t change anything about his upbringing. He recalls playing in the woods and streams surrounding the house, reading the Little House on the Prairie series by kerosene lamp, hiding under the kitchen table while his parents talked literature and politics with their back-to-the-land comrades, and gorging on historical biographies at the Abbott Memorial Library in Dexter, the town where his mom went to grocery shop and wash their clothes.

In high school, his academic inclinations, as well as his name, set him apart from most of his classmates. Partly because he felt he didn’t fit in, Breen dreamed of a career in foreign policy that would take him far away from Maine. But then something surprising happened at graduation. When it was announced that Breen had won a highly coveted National Merit Scholarship, his classmates at Nokomis Regional High School gave him a standing ovation. At the time, he didn’t understand what impact that small but powerful act would have on the rest of his life. “Instead of feeling like an outsider who finally got out, I left for college feeling like my community was behind me,” says Breen. “Even if they didn’t understand what drove me, they valued me and they supported me.”

A government major at Harvard University, Breen found himself ultimately fascinated with matters of domestic rather than foreign policy—one of many shifts that would lead him back to his home state. In particular, he became invested in issues surrounding educational opportunity and economic development. “It was pretty clear to me that rather than dramatically change capitalism, it was necessary to create enough equality in education so that people could go into that system and make their own opportunities,” says Breen. As a junior, he got an internship in Senator George Mitchell’s office in Washington, D.C., an experience that deepened his appreciation for Maine and the state’s famously pragmatic leaders. “The fact that Maine had produced incredibly smart, influential, national-caliber leaders like Mitchell, Edmund Muskie, and Margaret Chase Smith made a huge impression on me and gave me some heroes and mentors to aspire to,” says Breen. By the time he was accepted into Harvard Law School, he had his sights set on returning to Maine to help shape state policy, especially around education.

After a brief stint as a law clerk for a federal judge in Tulsa, Oklahoma, Breen returned to Maine, where he accepted a position as junior legal counsel in Governor Angus King’s office. At this time, Maine was coming out of a recession and King’s central preoccupation was growing the state’s economy. At every juncture, King eschewed conjecture in favor of hard fact, and this practical approach resonated with Breen. He cites a study conducted at King’s urging in the early 2000s that revealed a strong correlation between a state’s economic prosperity and the percentage of the population with a bachelor’s degree—more proof of the return value on investments in education. When a position opened up in the office of education commissioner Duke Albanese, Breen jumped at the opportunity to work for him. Among other projects, in that role he helped develop school policies to create more positive school environments in the wake of the Columbine shooting and helped launch King’s initiative to provide every Maine middle-schooler with a laptop. But in 2003, after years working for state government, Breen was ready to make his next career move, this time into the private sector.

When he sat down with Bangor Savings Bank’s then-CEO Jim Dowe to discuss the possibility of joining the team as the in- house legal counsel, Breen said something like this: “If you’re willing to take a risk on someone who has never practiced law and knows nothing about banking, then I’m your guy.” Given Breen’s stellar reputation for strategic planning, Dowe was willing to take the risk, and the unconventional hire paid off. Dowe left soon after Breen joined the team, but Jim Conlon, who became CEO in 2005, put Breen’s talents to good use.

In the 12 years that Breen worked at Bangor Savings Bank, the company expanded
by leaps and bounds, and Breen—who self-identifies as a “dyed-in-the-wool generalist”—joined Conlon at the forefront of just about every growth spurt. The hippie son who, as a teenager, had imagined for himself a behind-the-scenes career in policy, became a leader in his own right. He had a hand in the company’s “deep-dive rebranding effort,” acted as the external communications officer, and oversaw the opening of several Bangor Savings Bank branches in the greater Portland area. Breen was also head of the bank’s charitable foundation; during his tenure, the bank’s giving quadrupled. In 2013, J.D. Power and Associates ranked Bangor Savings Bank highest in New England for retail banking customer satisfaction. From 2003 to 2008, Breen also served on the board at the Maine Development Foundation, where he was integral in bringing the Realize Maine Network—an organization dedicated to retaining and attracting young professionals in Maine—under the auspices of MDF.

Breen brings all of this experience to bear in his new role as president and CEO of the Maine Development Foundation. MDF’s mission is to foster sustainable, long-term economic growth in Maine, which is realized through a number of targeted programs, including the Maine Downtown Center, Maine Economic Growth Council, and the Policy Leaders Academy. “We literally have more programs than we have people,” says Breen, “which is an indication of just how lean and mean this staff is.” Through experience, Breen knows that it pays off to invest in Maine people through increased educational opportunities and workforce training, and to create a strong climate for investment. As Breen puts it, “[At MDF] we ask ourselves, ‘How can we motivate private, nonprofit, and state leaders to come together in a nonpartisan, research- driven way to catalyze the right ideas?’”

And so, since August, Breen has been hitting the pavement to help business leaders and elected officials tackle the problems they face, and to help them keep Maine’s bigger economic picture in mind. Earlier that week he went to Bucksport to help local leaders learn how they might become a part of the Maine Downtown Center program, which makes use of a strategic formula for boosting downtown economic growth; he brought together business leaders and policy makers from the University of Maine System to discuss creating a common, statewide goal for educating Maine’s workforce; and met with Maine legislators determined to work together in a bipartisan fashion and to set a tone of civility at the State House.

He accomplishes all of this and more with the faint but significant memory of his classmates at Nokomis High School cheering him on. As time goes on, and as Breen continues to work tirelessly on behalf of his home state, more and more Mainers have joined the crowd. Meanwhile, Breen is on his way to another meeting. 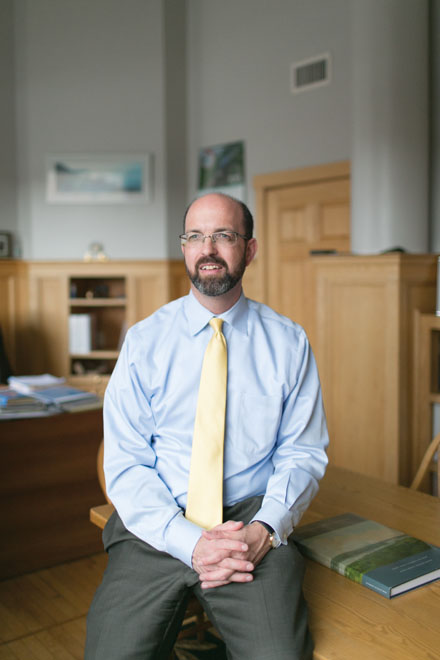 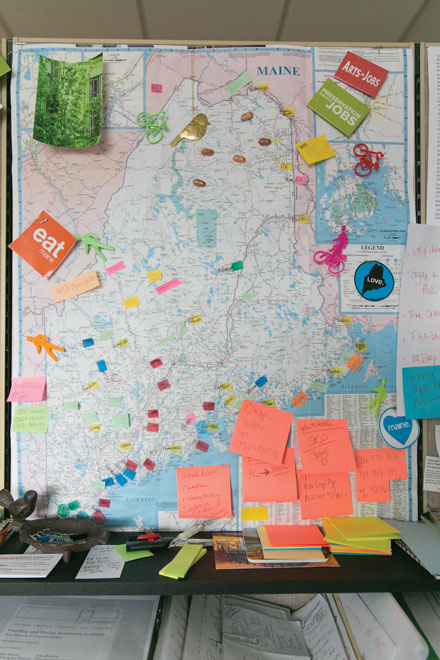 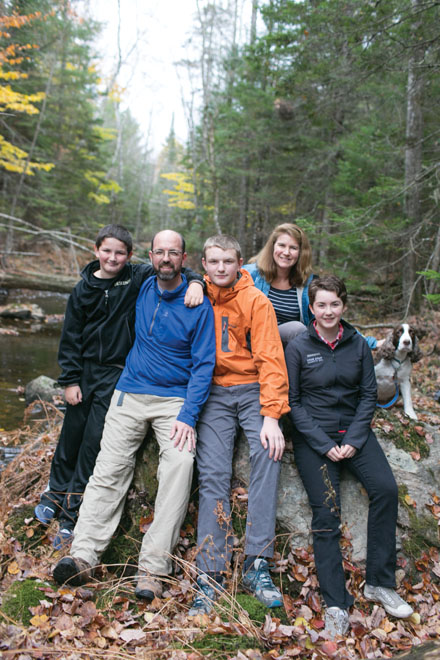 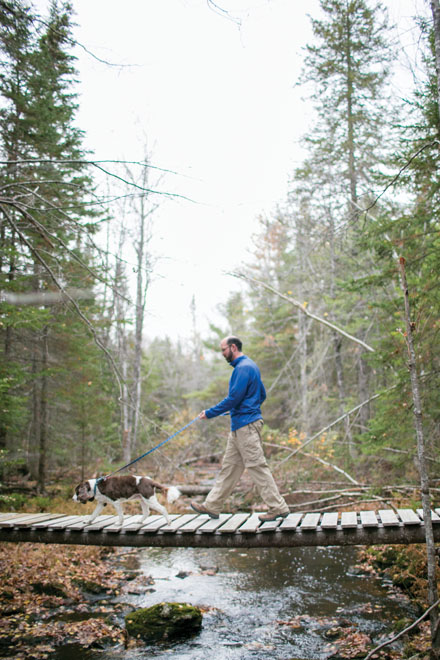