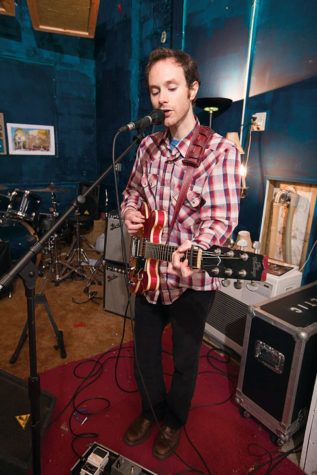 The face that greets you at the door: Jon Balzano-Brookes's tender, vaguely mystical voice invites you inside. 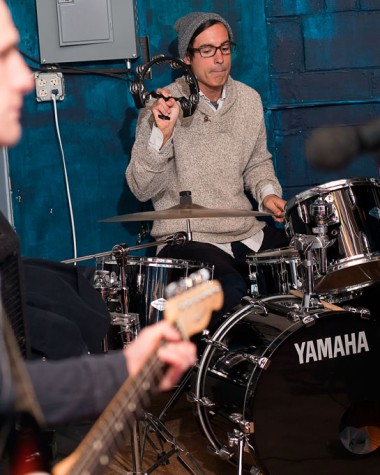 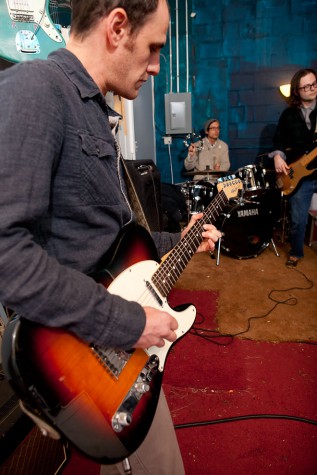 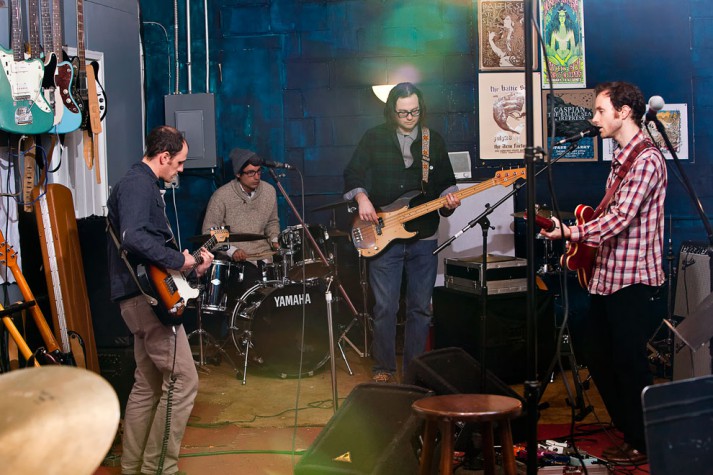 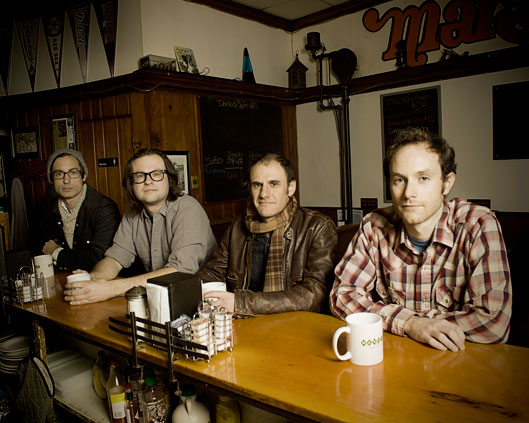 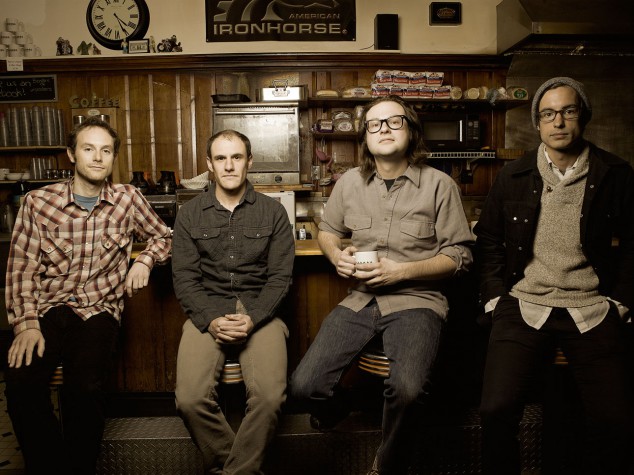 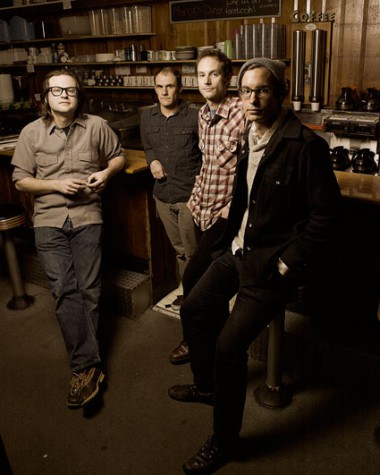 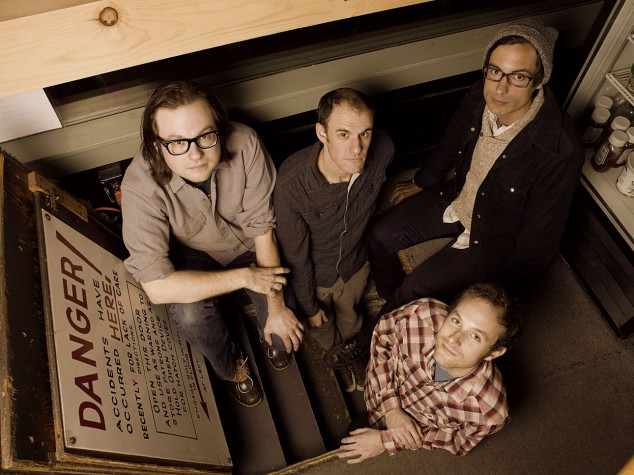 Things are looking up for the band. From left to right: Sean Newton, Tim Burns, Philip Willey, and Jon Balzano-Brookes are thrilled to be releasing their next album, Tadaloora, in mid-2012.

House of Wonder: The Enchanted Nostalgia of Phantom Buffalo

In an era characterized by flux, fragmentation, and tireless self-promotion, when musicians invent and reinvent themselves with astonishing speed, Phantom Buffalo has found a way to stay whole, stay real, and stay here—for more than a decade.

Consider the ego of artists, musicians, and writers. The job requires a sizable one. Put a journalist in front of a musician and the performer comes out. A list of accomplishments, an artistic philosophy spill forth. Who can blame them? It’s the way of the world.

Yet the young men who call themselves Phantom Buffalo are notably free of this tendency. One senses no false humility, no pomposity, no lamentations on the success of lesser bands. These guys are sweet, kind, and a little shrugging and aloof. They admit they’re not good at publicizing themselves, and they find self-promotion the least appealing part of their work. (It’s not uncommon for them to finish making a concert poster the day after the show.)

In short, the band doesn’t sell themselves—and they don’t need to.

Their music does the work for them.

Their music is an invitation that’s impossible to refuse.

Let me try this again: their music is like entering a warm house on a cold day. It’s a house rich with atmosphere, full of color. Antique wallpaper, old-timey furniture, a collection of curiosities on the shelves. The house, like the music, is whimsical, sepia-toned, and full of nooks. Come on in, their music says. There’s coffee on the stove.

This past fall, I had the pleasure of sitting down and drinking real coffee with three members of Phantom Buffalo. We gathered at Hilltop Coffee in Portland’s East End, the neighborhood they all call home. Jon Balzano-Brookes, lead vocalist and songwriter, is a quiet guy with a plaintive, haunting falsetto. Tim Burns, the lead guitarist who also writes some of their songs, has a wise face, angular cheekbones, and the gravest disposition of the bunch. Sean Newton, the bassist, has the long hair, glasses, and expressiveness of a hip, laid-back professor.

These three, along with Phil Willey and Joe Domrad, are founding members. (Jacob Chamberlain now plays drums.) They met in 1998 when they were students at Maine College of Art. For a while they called themselves the Ponys; later they came up with Phantom Buffalo. It’s a fitting name for a band whose music is at once beautiful and dissonant, ghostly and grounded.

Together, these guys have made consistently terrific albums for 10 years. That’s worth repeating: 10 years. They’ve remained in Maine (all except New Hampshire–born Sean were raised here), stayed together, and created lives that allow them to write music, perform regularly, and continue to grow their reputation and following. They’ve caught on in Europe—for a while they had a British label, and they’re currently signed with the French label Microcultures. Most of their press, in fact, appears in Europe. In June, a small, cutting-edge Mexican art magazine, Errr, flew them down to play in Mexico City. But despite their international appeal, they remain rooted here and committed to this community.

And Portland feels connected to them, too.

The Portland Phoenix named Phantom Buffalo’s most recent album, Cement Postcard with Owl Colours, one of the 10 best of 2010. In his review of Take to the Trees, their 2008 release, Sam Pheifle wrote, “Phantom Buffalo are the rare band that can seem both lo-fi and perfectly produced at the same time….They have a near-perfect feel for song dynamics, as though their tunes were alive and breathing, moving from the barest whisper to a thrumming growl.”

Indeed, the movement on any given track lends liveliness and unpredictability to the sound. Even listening to a recording is like eavesdropping on a group of quirky, self-taught musicians having fun in the next room.

Local producer Jonathan Wyman is, in fact, listening from the next room. “I have had the good fortune of making three albums with Phantom Buffalo, each one being a step forward from the previous effort,” he says. “They’re some of the most sensitive, positive, and thoughtful artists I have had the chance to work with….They have a clear vision of how they want their project to come out, and the spontaneity to embrace the occasional happy accident. And the outcome is beautiful.”

Beautiful is an apt description. This band is unafraid of prettiness, but they’re not so devoted to prettiness that they let melody rule or spill over into sentimentality. Underneath the pretty sound is an exhilarating dissonance, a roughness that gives the sound depth. (Their house has secret passageways.) The sound feels nostalgic, vintage, even with its electronic adornments.

They tell me their goal is to create for the listener a pure experience of music. They record their albums on tape, keeping themselves limited to the length of tape. Constraint and limitation, they explain, allow them to be as creative as possible, force them to be on their game. “We want real trapped sounds,” Jon explains. “We want people to hear a truer representation of what we really sound like versus a purely digital one.” This is also how their heroes—Neil Young and the Velvet Underground—were recorded. They are keeping the tradition alive.

“They’re a band I can put together in a room, and the sound they make together—in the moment, as a performance—is the sound on the album,” Wyman says.

“I know it sounds simple, but that’s not how every record is done….What comes through the speakers on my side of the glass is a document of a singular, unique performance.”

Their upcoming album, set for release mid-2012, takes the band from inside to outside, from a house to an island. Its title, Tadaloora, is the name of a fictional island, a land of the band’s own creation: a dreamy, enchanted place where inanimate objects and animals tell their stories. The album is a meditation on war and peace, a fabulist pastoral, and its songs, which the band has begun playing live, have the same vibrant, creepy, delicious beauty that has become the hallmark of their work.

Bands often come apart like milkweed—even the ones who make beautiful music. Like laboratory isotopes, many bands exist for mere nanoseconds, leaving only a few tracks to testify to their existence. And yet Phantom Buffalo has survived for a decade. How do they endure the ups and downs, for richer and for poorer, in sickness and in health? How do they nurture the flame without burning out?

Perhaps their longevity has to do with the inherent kindness and decency of their personalities. Because these guys are, it can’t be denied, exceptionally nice. Or perhaps it has something to do with their commitment to art over ego. Perhaps it’s because, like a family, they have weathered dark times together. At the end of the day, these guys are friends, and friendship goes a long way.

This is the house of Phantom Buffalo. Don’t be put off by the thorny bushes out front, the creaky stairs. The door is unlocked. Make yourself at home, poke around a bit. Stay awhile.