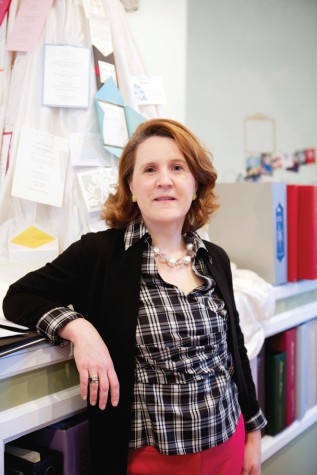 What’s your connection to Maine?
I moved here about 19 years ago. My husband grew up here, and we wanted to raise our kids here. So I’ve been in the Portland area for a while.

What was your path to Papier?
I actually worked for the first owner. When I had my second child it wasn’t an option, but we were always customers of her store. By the time I bought the store, I’d had a 16-year relationship with Papier. All of us who have owned the store or worked there feel like it’s its own thing—something special to protect. We’re the only thing like it in town, and the only old-fashioned stationer north of Boston.

What is special about paper and pens?
Writing a letter and writing an email are so different. There’s nothing like opening a gorgeous thick envelope with liner—you know you’re special when you’re the one receiving it. We deal with the commemorative parts of people’s lives—birth announcements, death announcements, weddings, bar- and bat mitzvahs. People said to me, “You’re buying a paper store in the middle of a recession when everything is going electronic?” People also tell me all the time that they’re struggling to organize themselves digitally. A smartphone is supposed to replace all those things in our life and for so many people there’s no way it can. The pens are a real nod to my husband, who was a pen collector. When he died I inherited a collection of nearly 300 pens, so I sort of brought a new pen component to Papier.

where do you begin with an engaged couple?
We usually start with a two-hour consultation, where we teach the couple about the different print processes and paper that we have available and the different styles and constructions of invitations—from digital flat printing, which can be very vibrant in color but is flat on the page, through raised printing to letterpress, in which the text is depressed into softer paper. There are rules that have been around for centuries. We really try to be the expert for couples. I often say, “We’re here to share with you a couple of the accepted ways to do it. But we’ll do whatever you want.” I never want anyone to come back and say, “I didn’t know this, why didn’t you tell me?” Our job is to make sure that doesn’t happen.

What are some stationery trends you’re seeing?
I’m seeing a move back toward much more traditional stationery. With digital printing we can do a lot of modern, interesting design. But I always say, at least once, to whomever it is, “In 20 years when you look at it you want it to be a commemoration—you don’t want to say ‘Oh, that was a fad.'”

What is a wedding invitation meant to communicate?
The job of the invitation is to represent you as a couple, and as a family. To relay to your guests, as a good host, what the event is going to be like, how are they supposed to dress—is it an informal or formal wedding? Is it beachy? Our job is to put all of that on a piece of paper. A lot of brides then make design decisions based on the work we’ve done, depending how early they start. Stationery can really influence other wedding details.