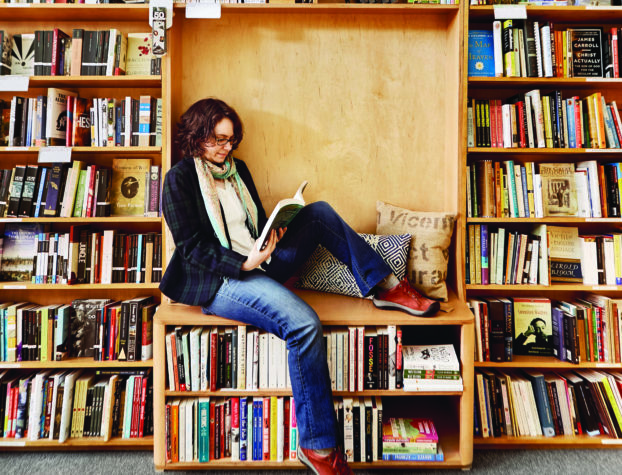 Nothing beats the comfort of a good book, or good Maine bookstores. Indie booksellers across the state craft creatively rich environments, curating books, author events, and knowledgeable staff to help us escape reality and get lost in someone else’s story. Here is a list of a few of our favorite Maine bookstores

01 SHERMAN’S BOOKS AND STATIONERY | MULTIPLE LOCATIONS
In business since 1886, Sherman’s now operates six Maine bookstores across the state that feature local authors and offer a variety of books, toys, and gifts. Poets and novelists often read their work and hold discussions at Sherman’s stores, especially in Portland and Bar Harbor.

02 LONGFELLOW BOOKS | PORTLAND
With its careful selection of small-press editions and bestsellers, used books and new ones, Longfellow has long been a staple in Portland. Citing the readings the store has hosted and its support of young writers, author, poet, and teacher Gibson Fay-LeBlanc says, “Longfellow Books feels like home to me.”

03 RABELAIS | BIDDEFORD
Providing one of the largest selections of rare, out-of-print cookbooks in the country, Rabelais is a mecca for chefs, epicures, and food historians. Genevieve Morgan, author of Undecided: Navigating Life and Learning After High School, says that Rabelais “is one of the most wonderful adventures anyone can take.”

Since it opened in downtown Camden in 1970, Owl and Turtle has been a treasure trove for those interested in marine history and nautical charts. Fiction and hard-to-find books are also on offer, and an adjacent cafe serves coffee, tea, and baked goods.

05 PRINT: A BOOKSTORE | PORTLAND
At Print, owners Emily Russo and Josh Christie promote Maine and New England authors, as well as writers of color. “Emily and I are devoted to diversity, equality, and social justice, and that’s something that’s reflected in the books we stock and the local partnerships we form, and will be reflected in our events,” Christie says.

08 ELEMENTS: BOOKS COFFEE BEER | BIDDEFORD
A curated selection of mostly used books is grouped under “elements” from fiction to gardening to sports. Elements presents an assortment of soups and snacks from area restaurants and bakeries, along with tapas plates and a wide-ranging selection of Maine beer.

09 PRO LIBRIS BOOKSHOP | BANGOR
Over the past three decades Eric Furry, the charismatic owner of Pro Libris, has amassed a collection of over 35,000 used books in more than 30 genres. Shopping at Pro Libris necessitates an ATM run, however; the used bookstore is cash-only.