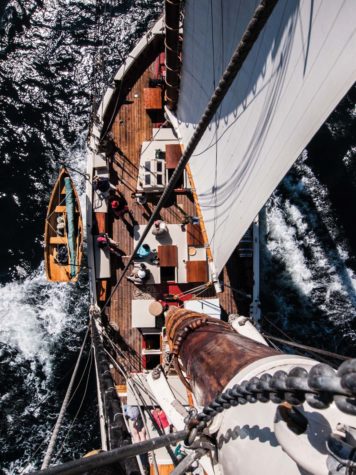 Whether salty or fresh, Maine’s waters offer breathtaking views and intriguing wildlife. Grab your camera and follow our guide for the best ways to see life on the water around the state.

First Chance Whale Watch | Kennebunk
Several species of whales migrate through the Gulf of Maine each summer, and First Chance Whale Watch offers a four-and-a-half-hour tour to see them, along with views of the Kennebunks by water. First Chance’s 87-foot-long Nick’s Chance travels to summer feeding grounds of finbacks, humpbacks, minkes, blue whales, and the endangered North Atlantic right whale.

Katahdin Cruises | Greenville
The steamboat Katahdin, or the Kate, is the largest remaining relic of the time in Moosehead Lake’s history when steamboats were the primary mode of transportation for visitors to the lake’s resorts and various industries. The vessel, built at Bath Iron Works in 1914, offers three different tours from June to October, ranging from three to eight hours: a cruise to Sugar Island, a cruise to Mount Kineo, and a cruise to the top of the lake. While on board, passengers see the coves, bays, and smaller islands that make up Maine’s largest lake.

Schooner Stephen Taber | Rockland
The Penobscot Bay islands are the background and destinations for the Stephen Taber. From May to October, the two-masted ship offers three-to six-night trips, including specialty cruises with live music, wine tasting, and a schooner race. Passengers spend the night in one of the ship’s 12 cabins and take day trips to some of the 2,200 islands located in the Taber’s cruising ground.

Monhegan Boat Line | Port Clyde
Both of Monhegan Boat Line’s vessels—the Elizabeth Ann and the Laura B, a former World War II patrol boat—carry mail and passengers between the island and Port Clyde year-round. From July to September, the boats offer a puffin and nature cruise to Eastern Egg Rock and a lighthouse cruise, which passes Whitehead Light Station, Two Bush Island Light, Southern Island Light, and Marshall Point Lighthouse, which was featured in the movie Forrest Gump.

Downeast Windjammer Cruise Lines | Bar Harbor
From May to October, Downeast Windjammer Cruise Lines offers a pet-friendly sunset sail on one of its four-masted windjammers. Throughout the evening tour, a live band plays underneath the schooner’s bright red sails. The wooden vessel has a wide deck where passengers can mingle and watch the sun set behind Frenchman Bay’s islands.

Rangeley Region Lake Cruises + Kayaking | Oquossoc
During a one-and-a-half-hour tour of Rangeley Lake, a Registered Maine Guide captain tells stories of the lake’s history. Passengers board either the Oquossoc Lady or the Gray Ghostand see Saddleback and Bald Mountains from the water. They also pass Narramantic Island and the camps along the shoreline. In the fall, there are foliage cruises where sightseers can photograph the colorful reflections in the water.