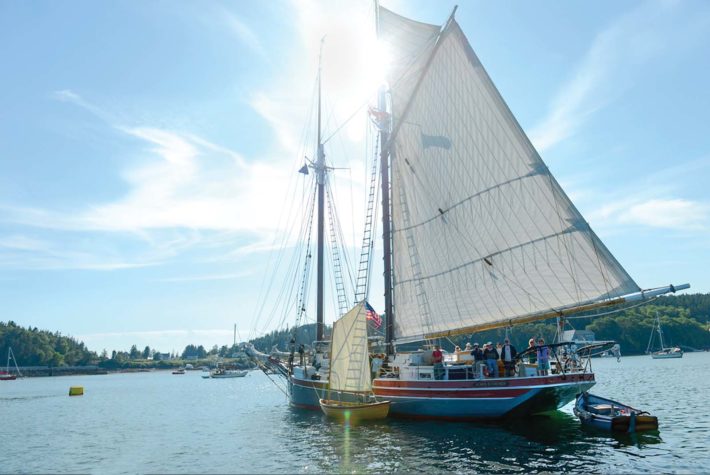 Of the hundreds of events that take place during summertime in Maine, these are some of the most worthwhile and unique.

The Yarmouth Clam Festival has been an institution in this southern Maine community for more than 50 years. The festival raises money for Yarmouth’s nonprofit organizations, schools, and churches. Individuals from 30 organizations volunteer their time to support their community and serve some of the best festival food around, including lobster rolls, lime rickeys, and, of course, clams (6,000 pounds-worth each year). The festival is always scheduled for the third Friday in July, and admission is free. —Emma Simard

This race from Peaks Island to Portland’s East End Beach originally started in the early 1900s. The YMCA of Southern Maine revived it in 1982 to celebrate greater Portland’s 350th anniversary. Today, over 600 swimmers participate in the annual event. Anyone who can swim a mile in less than 40 minutes is welcome to register for the 2.4-mile race. —Emma Simard

Every summer for more than 25 years, folk musicians from as far away as California have gathered on remote Swans Island to play together and perform concerts for island residents. While Swans can easily be reached by ferry from Bucks Harbor, the island has very few places to stay overnight, so many festival attendees arrive aboard their own boats. Some of Maine’s windjammers also include the event among their scheduled stops. Boaters get to be close to one of the most whimsical aspects of the festival: musicians singing sea shanties aboard a small brigantine as it cruises around Burnt Coat Harbor. The concerts take place over three evenings in the island’s Odd Fellows Hall, where performers parade in Mardi Gras-style and finish with rousing songs that encourage everyone to join in. —Susan Axelrod

The Maine Lobster Festival, which is celebrating its 70th year in 2018, is a huge summer draw for Rockland and the rest of the midcoast. With 20,000 pounds of lobster served, the event more than lives up to its name. In addition to five days of eating, the event includes a parade, cooking competitions, fine art, road races, and live entertainment. Tens of thousands of people attend the event each year, and the money raised goes to community groups, charities, and other organizations. —Kate Gardner

Machias has hosted this celebration for the past 43 years. There is plenty to do at this year’s three-day festival, including a five-mile run on Saturday morning and the musical comedy, A Mermaid’s Tail. The Machias Wild Blueberry Festival has something for everyone, with contests and raffles happening daily, live music, blueberry farm tours, and much more. More than 250 specialty merchants and artisans offer unique Maine-made gifts and celebrate the little blue fruit that put downeast Maine on the map. —Emma Simard

Located on Bangor’s waterfront, the American Folk Festival is a celebration of arts from different cultures, including music, dancing, crafts, food, and storytelling. Bangor hosts a 5K race each May to raise funds for the festival, keeping it as free-of-charge as possible for attendees. Regional artists offer handmade crafts, and there is a variety of food, both regional and from different locations around the country. The festival attracts around 90,000 visitors each year. —Emma Simard